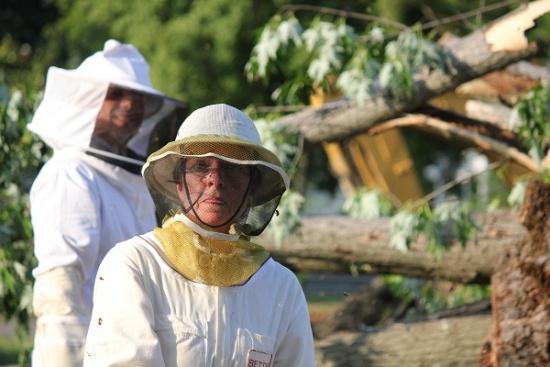 Doug Bodary, left, and Betty Keaton helped defuse the situation. (BOB STOETZEL photos)
The last few weeks in Woodbury have been hard on the wildlife living inside the city limits.

First there was the plight of the Barn Owls which were found living in a tree downed in the city park. That, however, had a happy ending. The mother came to the rescue of her chicks; she accepted the new home given to her by TWRA Officer Mark Vance.

Last Tuesday, Preston Brothers started working on the property that will become the new parking lot for the Adams Memorial Library. As they were pushing down a large maple tree, it was found to have a huge honey bee hive in it.

The bees started swarming and became a danger for the workers so Terry Preston called off work for them for the bees to settle down. Terry called local UT agricultural director Bruce Steelman and advised him about the problem. Bruce called a friend who he thought would be able to take care of the problem, Doug Bodary.

Bodary called Jeff and Betty Keaton from Blanton School Road on Short Mountain and together they met at 5:00 p.m. at the library.

Each of them have experience in dealing with bees and came prepared with white bee keeping clothing, including the bee keepers hat with the netting over  the face. Their main quest was to capture the queen bee; the hive will follow the queen wherever she is taken.

In this case Jeff Keaton brought a single hive compartment to transfer the queen to it and then the worker bees would follow and populate it and go into the business of making honey again.

However, after an hour and a half the queen was not found. The queen is the biggest bee in the hive. All the working bees are female and the drones are the males. The drone's only job is to fertilize the queen for more worker bees; the only thing left for him to do is eat. They are big but still not as big as the queen. If the queen could have been captured then the hive could have been moved without any trouble. There are a couple reasons why the queen wasn't found. First since it was a huge hive she could have been in a part of the tree where the bee keepers couldn't get, or she could have been killed when the keepers were opening up the tree with a chain saw. If she had left the workers would have followed her.

As of Thursday afternoon the tree was still in the same position as it had been when it was knocked down due to the construction effort. Preston's had a ribbon and a backhoe blocking off the drive to the bees. A lot of honey was harvested from that hive. An abundance of honey was running out of the tree parts that contained the hive.

Bruce Steelman was very appreciative of the Preston Brothers halting the work to allow the bees to move either by them or by human help. Nature is resilient, nature is good; that is how God made it to be.