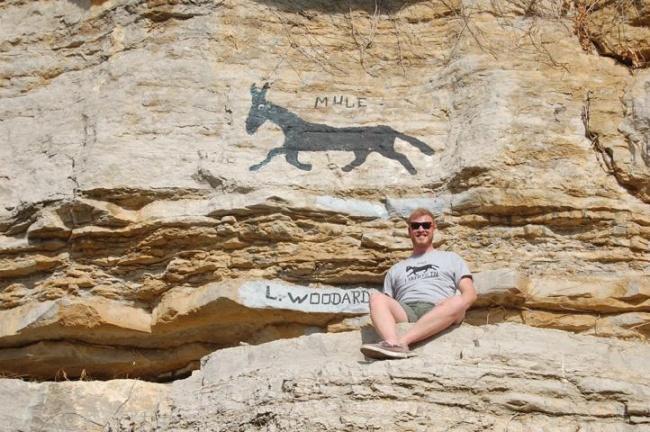 Leave Woodbury via Highway 53 North, cruise past bucolic Gassaway on into DeKalb County and turn left on Highway 70 at the outskirts of the Disney-like village of Liberty (population 310), and a short piece down the road keen-eyed travelers might spy a 4-foot-wide, inky-black mule painted about 25 feet up the side of a limestone cliff.
Known as the Liberty Mule, aka the Allen Bluff Mule, the animated creature has captured the curiosity of passers-by for more than a hundred years, bringing a sparkle to the eyes of children now as it did then.

The obvious questions pop to mind: who, when and why?

The solution to this century-old-riddle may never be explained definitively, while a variety of theories have tumbled down over the decades, ranging from absurd to logical.

"I guess there are about a thousand theories," said the late Ed Hale, who served as mayor of Liberty for 43 years and died in May at age 95. Hale believed the mule made its first appearance on the cliff around 1895.

Once the more extreme theories about who first drew the image are discounted (tales range from Hank Williams and Roy Acuff to it being a memorial to an ass that fell from the cliff), one of two DeKalb County natives appears to be the most likely original illustrator.

A clue (or maybe not) is the name L. Woodard painted on the rock several feet below the ebony mule.
Oleta Winfree of Lebanon, who grew up in Liberty about a mile from the mule sketching, recalled, "The mule has just always been a part of Liberty. It was thought to have been painted by a local man named Lavander Woodard, but that's just hearsay. No one ever heard him claim credit for the work. He was kind of a strange person. He had white hair and a beard to match. He was a housepainter by trade. He rode one of these old bicycles with the huge front wheel."

As for further details, she says, "All I know is the mule, and her name is Maude or that is what we always called her. Every time we went by, we always said, 'I want to see Maude.' I'm 87, and it's been there ever since I knew anything about it."

Jimmy Mullinax, 78, another Liberty native, who lives in Alexandria, holds firmly to the notion that it was Woodard, whom he discovered dead in the late 1940s.

"My daddy was born in 1905 in Liberty, and he said Woodard done it. All the old-timers say Woodard done it. He painted signs," said Mullinax. "I think Brown Mule Tobacco had something to do with this. I believe the first mule was red [like the mule on the tobacco package]."

"It makes sense if a tobacco company had it done," chimes in Mullinax's daughter, Ria Baker, a lifelong Alexandria resident who collects historical items related to the area. "He was a sign painter so it makes sense that they would hire the resident sign painter to do the job.

"There's been a big rivalry over who actually painted the mule originally. The mule has been red, green, black and every color in the world," Baker reported.
Mullinax recollects tales told about Woodard riding his velocipede, a bicycle with the big front wheel, along the streets of Liberty with "paint buckets hanging from his handlebars and a step ladder under his arm."

"I was scared of him. All the kids were," said Mullinax. "He had a long, dirty beard. When I was in seventh grade, me and Charles Fite [of Lebanon] took him his lunch one afternoon to his house and found him dead. That was about 1948 or 1949."

Mullinax, a retired mail carrier who also ran an upholstery business and antique store on the Alexandria square for years, remains the proud owner of Woodard's 143-year-old bicycle.

"It was made in 1870 and they call it a boneshaker," he said of the bike he used to pedal in local Christmas parades.

(The velocipede was named boneshaker in reference to the extremely uncomfortable ride created by its stiff wrought-iron frame and wooden wheels surrounded by tires made of iron.)

But, getting back to the Liberty landmark, the illustration became the object of a protest by local citizens in 2003 when the Tennessee Department of Transportation began widening Highway 70 to four lanes.

"They say it's the million-dollar mule. They were gonna blast the mule off, and the people wouldn't let them do it," recalled Mullinax. "It cost about a million dollars to move the creek over and move back a concrete wall to keep it [the roadway] from falling off in the creek."

Indeed, the folks of Liberty planted signs along Highway 70 as they initiated a spirited "Save the Mule" campaign. Once word reached highway officials, they told the folks of west DeKalb County not to worry.

A TDOT spokesperson at the time said, "When the road was designed, it was not aligned near the rock face where the painted mule is located. When the issue of saving the mule came up, the highway designer checked to make sure we were not impacting the mule."

Woodard, local painter notwithstanding, DeKalb County historian Thomas G. Webb appears to have tracked down the man who created the Liberty mule when he ran across a column by Dr. Wayne Robinson, a native of the Snow Hill area, from "The Smithville Review" the week of March 6, 1957. Here Robinson claimed ownership of the drawing.

In an article that Webb wrote for the "Review" Nov. 15, 2006, he reprinted Robinson's story as follows: "In early October 1906, I climbed up the face of the Allen Bluff to a ledge and with some coal tar made a flat picture of a character from a famous comic strip of that day. Everybody remembers Maud, the mule. That was 51 years ago, and even though it has been exposed to the elements and to nearby earth-shaking explosions, erosion has dimmed it very little. On the same bluff is the name of Will T. Hale, which was inscribed about 85 years ago."

(The Maud that Robinson refers to appeared in Frederick Burr Opper's popular comic strip of that era, "And Her Name Was Maud!," aka "Maud the Mirthful Mule," which first kicked its heels in the William Randolph Hearst newspaper chain on July 24, 1904. The strip disappeared in the 1910s, but was resurrected in 1926 and ran for six more years. Maud was famous for her stubborn streak as well as for rapping humans with her rear legs, taking particular delight in raining blows on Si Keeler, the farmer who owned her.)

Historian Webb found more ammunition crediting Robinson from a letter that Lucille Addington, Robinson's daughter, penned to "The Tennessean" in 1979.

She wrote: "The whole episode of the mule painting was a prank. It was prompted by a comic strip of that time which featured a mule named Maud. My father always spoke of the painting as Maud the Mule. He often recounted how he copied the drawing of the mule from the comic strip, enlarging the image by casting a shadow of it with an oil lamp onto paper fastened to a wall, then tracing around the shadow."

Webb noted that the majority of folks in the Liberty area had not heard Robinson's story, and that articles in the May 11, 1979, "Tennessean" and the May 1986 "Tennessee Farm Bureau News" presented the viewpoint that many of the residents of Liberty believed the mule to have been painted by Woodard.

Webb concluded his column with the opinion that "it is very likely Mr. Woodard repainted the mule while he was there."

Since the mule has received obvious touch-ups over the years, it proves difficult to pinpoint who any of the makeover artists might be. However, Nancy Goad, director of the Liberty Senior Center, admits that she was one of those.

"Somebody had defaced the mule and painted it random colors. My stepdad and I climbed the bluff and painted it back black before the 200-year-celebration in Liberty in 1986," said Goad, who also holds the key to the Liberty History Room, which has preserved a small section of articles and artifacts about the mule.

Who does she think first painted the mule?

"I don't know. I just like all of 'em," she says of the various theories.

Another local aficionado of the mule, freelance artist-cartoonist Lucas Antoniak, of Dowelltown, a sister community to Liberty, has parlayed the mule's fame into a cottage business. About four years ago, the 32-year-old entrepreneur began producing gray Liberty Mule T-shirts, which today he makes in a variety of colors.

"My dad and I talked about it. I had worked at a screen printing shop in Murfreesboro and had learned how to silkscreen. I printed the first mule shirt in 2007 and wore it around for two or three years, and people would ask me about it. We got a small press and started making them," said Antoniak.

"It's neat when I'm out and see people wearing the T-shirt. I talk with them and they always have a story," said the artist, who also offers a critique of the critter on the cliff. "Whoever painted it knew how to draw. It's anatomically correct."

Lo and behold, Liberty is not the only Tennessee town to gain a small measure of fame for a high-flying mule.

When construction workers completed the ironwork for the Burwell Building in Knoxville in 1907 or 1908, they hoisted co-worker Maud the mule 10 stories high, and the event was witnessed by a reported 10,000 bystanders.

One observer to the Knoxville mule-raising penned a postcard to a friend that read:
"This was quite a stunt - and every one and his dog came to see it. This mule has been used around the building for some time and when the ironwork for the last story was put up, they hoisted the mule up to the platform that you see and she made a speech a la mule. Could she have talked no doubt she would have used some strong language."

Facts bear that Liberty's rocky billboard of Maud the mule beat Knoxville to the punch. It certainly has given the village, its neighbors and curious travelers something to ponder and debate for the past 100 years as folks continue to get a kick from the Liberty Mule.