Legends rest by the Riverside 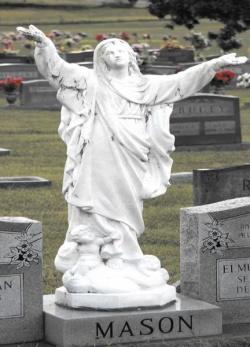 Editor’s note: This is part 5 of a series on area cemeteries

In a eulogy for Dr. Mason, delivered Aug. 13, 1990, Bill Smith helped put his friend at eternal rest with these words: "Our lives have been made rich because of Dr. Mason coming home to Cannon County. Dr. Mason was first a son, brother, husband, father, teacher, gentleman, author and our friend. We will miss him, but his published works will last on and on."

Mr. Mason's funeral was in Cannon County, but his burial was in neighboring Murfreesboro's Evergreen Cemetery.

Cannon County's Riverside Cemetery, like Evergreen, is one of the largest burial grounds in Middle Tennessee.

Many don't realize that technically, there are two "Riversides" … Riverside Garden (the older section), managed by the Woodbury Funeral Home and adjoining Riverside Cemetery, operated by Smith Funeral Home.

In both rests hundreds of "Who's Who" type citizens.

If Riversides' adjoining cemeteries are not Cannon County's largest, they're amongst them.

"I would judge Riverside to be the largest in the county," assessed Wood-bury historian Joe Daven-port.

"Riverside is the largest in our community," con-firmed Woodbury Mayor Harold Patrick. "I admire the folks from Woodbury Funeral Home and Smith Funeral Home who keep Riverside trimmed and neat.

"Cemeteries all over Cannon County are immaculate, thanks to individuals like Thomas Melton, who spends his time and money to keep little Pleasant Ridge Cemetery looking pristine, on the hillside up toward Gassaway," added Patrick. "We have people like Mr. Melton all over the county, taking care of the cemeteries and graves of their loved ones who deserve to never be forgotten."

"Most of my people are buried in Riverside," Patrick concluded.

"Gilley Hill (to the south of Woodbury) and Ivy Bluff (to the east) are two other large cemeteries," said Mr. Smith, and he should know since he recently celebrated 95 years of life in Cannon County.

In addition to the difficulty of designating the county's largest cemetery, it's impossible to name the largest funerals in old and modern Cannon County that dates back to the late 1700s and 1800s.

A case can be made that doctors Reuhland and Mason, in their respective walks through life, touched more families than any two men collectively in Cannon County history. Add physician Carl Adams, a Short Mountain native and founder of the community's original Good Samaritan Hospital, to the equation, it's likely no three men touched as many lives positively.

"Dr. Adams, the first time he came into Woodbury as a boy off of Short Mountain, he walked barefoot both directions," accounted Smith. "In the 1930s-40s-50s decades, Dr. Adams was the 'go to' man in our community."

Dr. Adams' remains are at rest in neighboring Rutherford County.

Mason and Reuhland were different types of doctors …

Educator/author/historian Mason returned to his Cannon County roots from a distinguished 20-plus-year teaching career at the U.S. Naval Academy, to tirelessly research and pen multiple history books about families ranging from Auburntown (formerly called Poplar Bluff) to the north, to the rural villages of Readyville, Burt and Bradyville to the south and west, and Short Mountain and Ivy Bluff to the north and east.

With his remarkable labors and accomplishments, it was the right thing to do when the Cannon County Historical Society dedicated their latest chronicle of history - "Cannon County, A Pictorial History" - to the memory of Dr. Robert L. Mason, born Feb. 17, 1912, on the ridge of the south side of Short Mountain Hollow.

"Formal education in that era came at a dear price. His first three years of schooling were at Prater, near the family home between Parchcorn and Shinbone," the memorial traced Dr. Mason's earliest days. "When that school closed, he started the long horseback ride to Woodbury (to continue his education) in 1922."

Dr. Mason ultimately graduated from high school in 1931, and eventually paid his way through State Teacher's College (today's MTSU) by working on Cannon County roads for 15 cents an hour.

Dr. Reuhland was one of Cannon County "chosen" citizens, since he was not born here.

He imprinted his remarkable legacy of life, first as a family physician and later, as a prominent founder of Cannon County's modern-day Stones River Hospital … no small accomplishment.

But he was more than a mere local healer, since Dr. Reuhland frequently championed (insisted on) adequate medical care for military veterans at York VA and Nashville VA medical centers.

"It's nothing but right that the Veterans Administration treat our veterans with the best of care," Dr. Reuhland was quoted in a meeting he held at York VA, after a veteran from Cannon County had been turned away in 1991.

For more than 30 years, Dr. Reuhland served as medical examiner for Cannon County, with no pay, working hand-in-hand with local and state law enforcement officials at death scenes, including murders and other heinous crimes.

It's understandable that his funeral on Oct. 12, 2012 and burial in Riverside Cemetery, was attended by multiple law enforcement officials from throughout the great Volunteer State.

"I would estimate there were more law enforcement officers in Middle Tennessee than any time in history to attend Dr. Reuhland's funeral," described retired Rutherford County Sheriff Truman Jones. "At one time or another, Dr. Reuhland assisted every law enforcement agency in the Volunteer State."

And so, dear reader, the next time you need your emotional batteries charged, take a drive to Riverside or any other of the estimated 200 area cemeteries, and soak up the important legacies safely stored there.

Print
Members Opinions:
appdancer
[Delete]
Unless "old Dr. Adams's "remains have been moved, they are still at Riverside.
bolo
[Delete]
"Old" Dr. Adams was J. F., the father of Carl. Carl was also a physician. He didn't practice in Woodbury, but seems like he might did in Murfreesboro. Seems I might remember he went out of state and became known as a great lung specialist. and seems he later died from lung cancer. Dr. J. F. paid for his medical schooling by going door to door peddling Singer sewing machines. My mother used to tell about his sons delivering blocks of ice.