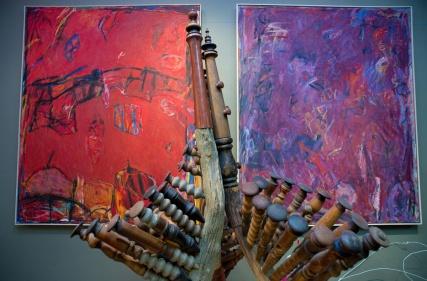 (free and open to the public)

"Our best aspirations should surely lead in the direction of angels."  David LeDoux

Tim Treadway was born in Nashville, TN. He received his BFA from MTSU studying under David LeDoux in painting and Jim Gibson in sculpture. Tim is a master mason who specializes in stone work. His sculpture is inspired by nature, antique salvage, and woodworking tools with the  goal is to create with freshness, originality and spontaneity. Mr. Treadway's work is divided into two approaches. In one series, He utilizes shaped blocks of wood arranged in a geometric framework by designing shapes and organizing into a rigid grid. The other series consists of an organic assemblage of weathered wooden objects. The found objects are either from nature or machine manipulated. Tim states "I prefer using the objects as they are found resulting in weathered and antique surfaces. A sense of floating is achieved when the piece hands from overhead."

Admission to this exhibit is free and open to the public. The Marly Berger Gallery located in The Arts Center of Cannon County is open 10 a.m.-4:00 p.m. Monday through Saturday. The Arts Center is located on 1424 John Bragg Highway, just west of the town of Woodbury, approximately 20 minutes from Murfreesboro, Manchester, and McMinnville and one hour southeast of Nashville.  Office hours are 10:00 A.M. to 4:00 P.M., Monday through Saturday.  For more information pleased call 615-563-2787 or 1-800-235-9073