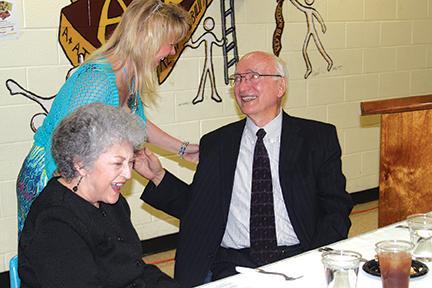 Tears flowed at the Roast of Vice Mayor Charlie Harrell … tears of laughter that is.

It was tough to tell just which friend got the biggest roars of laughter at the “family friendly” event held in the cafeteria of Cannon County High School.

Even Herb Alsup, president of the Adams Memorial Association, got into the act.

“You’ve come here tonight not for roast pig, but to roast Charlie,” Alsup told the overflow crowd as they finished their meal.

Wayne Prater, Cannon County Trustee, got the ball rolling with tales of his long, fruitless search for people who had good things to say about Charlie. Finally, he discovered that the only good thing folks had to say was “He married Dell.”

“There are a couple of interesting things about Charlie including the best joke you will hear all evening … He’s a candidate for Register,” Prater said, suggesting that Harrell might could locate his office in the nursing home.

Jokes about age and the scarcity of hair atop Harrell’s head ran through the presentations including that of his wife, Dell, who marveled at the photographs of young Charlie who seemed at least one point to have abundant hair on his noggin.

“That big head of hair ... Its hard for me to believe that,” Dell said, confiding that she’s never seen hair atop her husband’s head.

She did recall their courtship after Charlie sold her father a beautiful red and white 1958 Chevy Belaire. “It had air ride,” a feature soon dropped by Chevrolet in favor of conventional springs and shock The air ride feature would occasionally cause the car to sway to one-side which was pretty disconcerting when driving down the highway.

As for Charlie’s car. He drove a 1941 Ford coupe. “It was commonly called a bootleggers special. We named it ‘Running Bear’ after a popular song of the day,” Dell said.

After marrying, Charlie and Dell lived at “Vet’s Village” at MTSC. The not so glamorous housing unit was comprised of only Army barracks shipped in from Camp Forrest at Tullahoma.

“Rent was cheap. $24 a month including utilities,” she said.

After graduating in 1962, Charlie went to work for insurance companies as a surety bond specialist. This job forced the family to move.

“We moved 15 times in 14 years,” Dell said. Along the way, she kept a clipping of a house plan out of the Philadelphia Inquirer newspaper.

Finally, the couple got to build that “dream house” in Murfreesboro on Riverview Drive. It was a dream world until Charlie finished some painting chores and announced to Dell. “I’ve sold the house.”

Eventually, Charlie and Dell returned to Woodbury in 1972 when they acquired the Marshall Duggin Insurance Agency and later merged with Walter (Cap) McCrary to form the McCrary-Harrell Insurance Agency.

Prater said he was amazed by the size of the crowd at the event because he knew that Charlie had to pay people to attend.

“Charlie was my Sunday school teacher years, years ago. He had been thrown out of the Air Force, or at least that’s how we heard it, for gambling,” Prater said, recounting the 10 things Harrell taught youngsters. “If you whisper people will believe whatever you say” was one of them. “When you’re in it up to your ears do not open your mouth” was another.

Harrell’s boyhood in Short Mountain was a common theme to the speakers.

Mary Lynn explained that her father was responsible for Charlie’s nickname “Preacher.”

“The reason for that is because when Charlie was a little boy he ran a trap line” to earn a little money, she said.

One day, Charlie found an animal he had trapped covered with crawling creatures, she continued. He asked my father, “do creatures hurt the fur?”

“Dad, he couldn’t hear too well, thought he was asking ‘do PREACHERS hurt the fur,’” she laughed.

From that point on, Charlie was stuck with the nickname “Preacher.”

In those days, Charlie was best friends with Mary Lynn’s brothers Dukes and Kenneth Foster, cousin Billy Youngblood and Paul Foster, who made a military camp out of brush piles.

“I sent out 30 emails to people asking them to say good things about Charlie,” Stone said. He got no responses. He followed up with a request for “juicy” tidbits about Harrell. “The next morning I had 36 responses.”

“I started looking through them and I had to burn the first six. The next 22 I had to put them in a box and sealed them up,” Stone said.

Eventually, he did receive a few responses suitable for repeating in public. Most of those came from classmates who reside in the nursing home.

Stone also checked Woodbury City Hall for responses. “They said he does the work of three men … Curley, Larry and Moe. They also said Charlie was a multi-tasker. A multi-what? I asked. A multi-tasker … he can talk, laugh and pee all at the same time.”

In response, Harrell had little to say. He was a gentleman to the last despite all the roasting.
The roast was “an honor indeed,” Harrell said, pointing out the intent of the event was to raise money for Adams Library.

Reflecting back to his early days in Short Mountain, Harrell said “We had two books, a Bible and a Sears catalog and you know what the catalog was used for.”

All proceeds from the roast, including ticket sales and contributions, go to the library building expansion/renovation project.