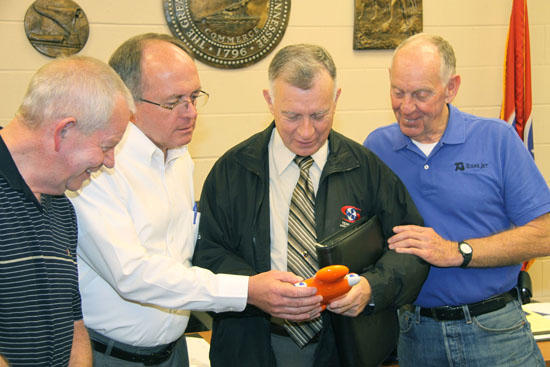 Medford Bragg is a man on a mission.

If he is successful in accomplishing that mission, it will means jobs for Woodbury.

The Cannon County native and graduate of Woodbury Central High School wants to open a facility in Woodbury to manufacture medical products.

One of the products is the only one of its kind, the PneuSplint - Inflate First Disposable Air Sprint. It's the first air splint that adjusts quickly and easily to any arm or leg - straight or at any angle.

Another is an interactive toy designed to give sick children some laughter back into their lives. Named Laffy Laffalot, when one of the 20 pre-programmed blue buttons is pushed, children hear a hearty belly laugh, the giggle of an infant or a silly snort. The contagious laughs instantly put a smile on kids' faces and help distract them from the pain and challenges of medical treatment.

Both products are currently being manufactured in China. Each was designed by Steve Islava, a former professional firefighter and paramedic who founded Care2Medical in 2009.

Bragg, who is an investor in the company is helping to secure contracts with the hope of manufacturing both the inflatable stabilizer splints and Laffy Laffalot in the United States.

During a meeting at Woodbury City Hall recently, Bragg told Woodbury Mayor Harold Patrick, Cannon County Executive Mike Gannon and Don Rigsby, jobs development specialist with the Tennesseee Department of Economic and Community Development that Woodbury is the preferred location of both himself and Islava.

That was welcome news for both Patrick and Gannon. "We want you here," they said in near unison.

Bragg said one of the key components in the plan is securing contacts with the U.S. military to provide the splints. To that end both the company and local officials are seeking assistance from U.S. Congressman Diane Black.

Beth Cope, a field representative for Congressman Black who attended the meeting, said she will apprise Black of the need for assistance in moving the project forward. Gannon said he believes the congressman's help can be a tremendous asset.

"Diane Black is doing everything she can to help us recruit business to Woodbury and Cannon County," Gannon said.