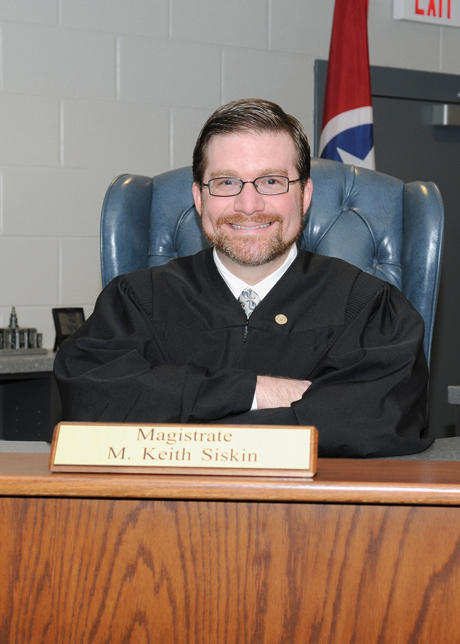 "He listens and applies the law appropriately and fairly," said Davenport, who appointed Siskin to his current seat as Rutherford County's Juvenile Court magistrate in 2004. "He knows the law. He's the whole package."

On Monday Siskin was named by Gov. Bill Haslam to replace Ash in the 16th Judicial District Circuit Court, which serves Rutherford and Cannon counties.

"I want to thank Gov. Haslam for offering me this opportunity in the 16th Judicial District," Siskin said. "I'm honored to be able to continue serving the citizens of Rutherford and Cannon County."

The Vanderbilt graduate and University of Georgia School of Law alumnus said this appointment fulfills a life-long dream.

"This is why I went to law school," Siskin said. "You can say it's a calling."

Siskin explained he interned for a judge in high school, which inspired his love for law.

"I've wanted to be a judge ever since," he said.

Siskin's first step to judgeship was in 2004 when Davenport appointed him as a Juvenile Court magistrate, where he presided over both civil and criminal cases including parentage, child support, child custody and visitation, dependency, neglect, abuse and delinquency matters.

Siskin was mostly assigned temporary cases - like motions and preliminary hearings - in juvenile court, because any of his decisions could be appealed to her as the supervising judge, Davenport said.

But may attorneys would request Siskin to get a faster hearing and not appeal to Davenport.

"A lot of attorneys would waive the appeal, because he knew the law," she said.

Davenport appointed Siskin to the magistrate seat because she had seen him in action over the years in juvenile court, representing everything from children with delinquent acts to child neglect to child support cases, she said.

"That's how I knew his capabilities and intelligence - from practicing in font of me," she said.

Haslam must have seen his capabilities to appoint him to the 16th district bench, which has seen some high profile cases recently. The most recent and high profile was the case of Shanterrica Madden, who was sentenced in July to 29 years in prison for the murder of Lady Raider basketball player Tina Stewart.

Ash, who has served the 16th Judicial District Court since 1994, stepped down to be a senior judge for the State of Tennessee. These are appointed by the Tennessee Supreme Court and may be assigned on a temporary basis to hear cases in any state court. With the addition of Ash, there will be four senior judges statewide.

"The opportunity to try all types of cases across Tennessee, as well as sitting on various appellate courts, will certainly be a challenge but I am truly excited about this new phase of my judicial career," Ash said upon announcing his promotion in July.

In addition to his regular docket, Ash was the presiding judge of the 16th Judicial District Drug Court and DUI Court.

In addition to his time on the bench in Rutherford County, Ash also authored "A Bridge over Troubled Water: Changing the Custody Law in Tennessee," which became the basis for changes to domestic relations laws in Tennessee. He also co-authored "Children of Divorce: A Practical Guide for Parents, Therapists, Attorneys, and Judges" with William Bernet.

"I have all the respect and admiration for Judge Ash. I have real big shoes to fill. But I'll do my best to follow in his footsteps," Siskin said.

While Ash presided over a variety of case, it's unclear whether Siskin will hear civil or criminal cases, because case assignments are at the discretion of Judge Mark Rogers. But regardless of the type, Siskin feels ready for whatever cases that come before him.

"Either way I can draw from my experience in juvenile court," he said, explaining that much of the state law and case law is similar, whether it be a divorce case or a criminal case.

"It's going to be a challenge, but I'm ready to get to work," Siskin said.