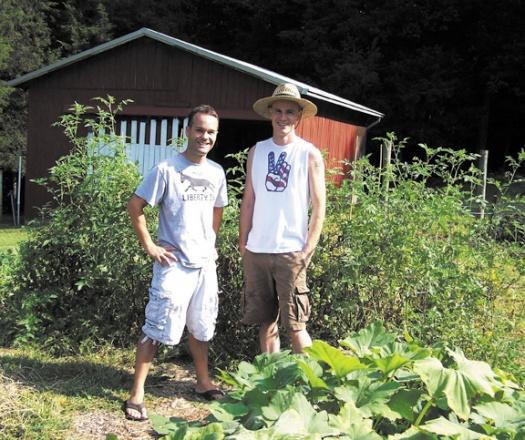 This is where it all grows for Christian Grantham and Vince Oropesa: their garden at Cannon County's Half Hill Farm, chock full of shoulder-high organic tomato plants.

In many ways, organic farming is simply going back to the way things used to be, according to Christian Grantham and his partner Vince Oropesa, who recently bought Half Hill Farm off Hollis Creek Road.

They're growing heritage vegetables with natural fertilizers, just like farmers did before all the comm-ercial fertilizers and pesticides were available.

The farm was recently certified by the US Department of Agriculture as an organic farm, the first and only one of its kind in Cannon County. Statewide, it's one of only about two dozen USDA-certified organic farms in Tennessee.

Grantham says the certification process is quite complicated, but worth the trouble: "You have to fill out a 50-page application to start. Then there is an annual inspection and fee. And they check everything, from where you got the seeds to whether you used well water, rain water or city water."

The certification allows the partners to label all their produce as USDA Certified Organic, which lets customers know they are actually doing the right things to insure quality and safety for the consumer, Grantham adds.

Basically, organic foods mean the farmer uses no genetically-modified seed, no chemical fertilizer, no pesticides, no petroleum products and in terms of animals, no hormones.

So what do the partners do about all those pesky bugs that want to eat the fruits and vegetables before they can be harvested? One of their solutions is encouraging ladybugs to come and dine on other bugs in their gardens. Another is bird houses.

"It's great," Grantham says "Not only are birds insect eaters, they eat 400 to 500 insects per day when they're nesting, and we get to watch them."

"Three sets of robins have raised their babies in that house," Oropesa adds, pointing to a little white house on a pole near the tomato patch.

So far, Half Hill is doing quite well, Grantham says. Partly it requires an act of faith, as does any new business.

"We believe in this so much that Vince is about to quit his job at Dell," Grantham says. Then both men will be full-time farmers.

Since winter is traditionally a slow time on a farm, this may not seem like the best time of year to turn to farming full-time, but Oropesa has a plan….

The team has put up a special climate-controlled building and will soon start growing mushrooms for local markets, as well as the wide variety of veggies they already produce.

"We will be growing shitake and miatake mushrooms," Oropesa says. He explains that they chose these two types to start because both are believed to have health-giving qualities.

Grantham adds, "Farmers need to grow these types of plants and mushrooms because pharmaceutical companies won't, since they can't patent them."

Grantham first came to Cannon County about three years ago, as part of a project to interview and help people who were artists and small-business entrepreneurs.

Then he got involved with a fellow who wanted to make legal moonshine, and Short Mountain Distillery was born. Actually, first, they had to work to obtain legalization, but the end result was that Grantham spent about three years as chief operations officer for the distillery.

Then about a year ago, he and Oropesa bought Half Hill Farm. They discovered a passion for living sustainably.

"We love the environment," Grantham says. "We're only here a short time, and we want to improve it for future generations. That's what life on this planet should be all about."

The farm uses only composted natural fertilizer, too. And Grantham points out that if every family would compost the waste grass and leaves from their yards instead of burning it, "we could lower our carbon output by 30 percent over the next ten years."

Since carbon output is a major cause of global warming, this could be a major contribution to a sustainable environment, Grantham adds. And it also could cut back on water and soil pollution since the compost could be used to fertilize flowers and lawns instead of commercial fertilizer.

Composting makes lawns and gardens more drought-resistant, too, according to Grantham. That's another reason compost is used at Half Hill Farm. "We almost never water our vegetables," he says.

In the summer, the two men grow tomatoes, peppers, cucumbers, watermelons, squash and other vegetables which they sell primarily at the Cannon County Farmers Market on Saturday mornings. Oropesa also makes special raw salsa which they sell at the farm market. It's great!

By next year, there should be plenty of organic blueberries, too. "We already have a waiting list for those," Grantham says. And there are small apple trees growing on the hillside waiting to produce future apple crops.

"The public is getting better-educated about organic foods, so the demand is growing," Grantham points out. As it grows, so will Half Hill Farm, ready and able to help meet the demand for healthy food in Cannon County.