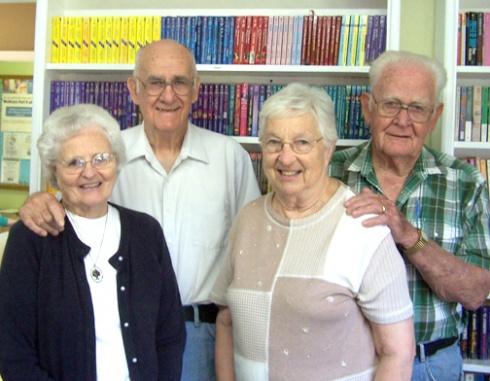 Jointly celebrating 119 years of married life this summer are, in front from left, sisters Grace and Della Frazier Young and standing proudly behind them, their husbands, brothers Virgil and Nile Young. Grace and Virgil will have been mar

Back in 1951, when Grace Frazier's dad said she had to go along on her sister Della's date with Nile Young, she never guessed she was about to meet her future husband.

"Daddy wouldn't let her come up here (to Woodbury) by herself," Grace says with a grin. Nile had a car and he wanted Della to meet his family, but parents were stricter in the early '50s, so Grace went along "everywhere they went."

Nile's youngest brother Virgil was the first person Grace noticed at the Young family home. "He was a good-looking hunk," she says, adding that she still thinks he's a pretty good-looking man now, more than 60 years later.

Nile met the sisters at a birthday party given by a friend of theirs. The birthday girl worked in a restaurant near the DuPont plant in Old Hickory where Nile worked.

Nile often had lunch there and had made friends with the girl, so she invited him to the party. When the party was over, he escorted Della and Grace home.

"That was my downfall," Della quips, then adds, "I take that back. It was probably the best thing ever happened to me."

So Nile and Della started taking Grace along with them and before long they were engaged, but Grace kept coming along to see Virgil.

Nile and Della married the following summer, in 1952, and on June 3rd they celebrated their 61st anniversary. He kept working for DuPont and soon they had four children, two boys and two girls.  The first three were born in Old Hickory.

But Virgil and Grace were younger and both had to finish high school. When Virgil graduated in May, 1953, he headed for Norfolk, Va., where he joined the Coast Guard. Whenever he got leave to come home, he'd go see Grace.

"I fed him baloney sandwiches and I guess that hooked him," she says. At any rate, in June of 1955 he was back asking permission to marry and take her back to Michigan where he was stationed.

"We were married on July 2 at the courthouse, and I went back to Detroit," she says. That means that next month, Virgil and Grace will celebrate their 58th anniversary.

Like Nile and Della, Virgil and Grace also have four children, three boys and one girl. But unlike their sister and brother's kids, their children were born in four different states wherever Virgil was stationed.

The oldest, Bob, was born in Michigan. For their second child, John, they were at home in Old Hickory. Number three, Jim, was born in Louisiana, and the youngest, Connie, arrived while they were in Virginia.

Della says the families still managed to share clothes. "At one time we had a big package of baby clothes we shipped all over the country," she says.

And regardless of distance, the couples saw each other often. "One highlight of our lives was to get to go see them all over," Della says. "Our kids were raised up like brothers and sisters."

And Virgil's sense of humor led to a funny adventure during those years.

"I had all seven of the kids in my station wagon-Connie wasn't born yet," he says. "We were at a stoplight in Murfreesboro when I noticed the fellow in the next car was counting the kids. I rolled down the window and yelled, 'And she's pregnant again.' You should have seen the look on his face."

Della and Nile's youngest child was born in Georgia where he went for work for a few years, but in 1972 his parents asked if his family could come back to the homeplace in Woodbury to help, and soon both families had returned to Tennessee.

Nile was a deputy for several years. First, he served eight years under Sheriff Robert Simpson, then four more as deputy for Bob Stoetzel. Now, at 82, he's still in law enforcement as a judicial commissioner.

Della, 80, has worked at both jails. She was a cook at the old jail, and then worked in the office at the new one.

Della and Nile still live at the home place, but not in the house where the senior Youngs spent their 64 years of married life. They bought a section of Nile and Virgil's parents' land and built their home on it.

Grace and Virgil lived at the farm for several years as well, but now have a house in Woodbury. "The house was too big and there was too much mowing," Grace explains.

Family traditions are still important in their family, too. "We always have a Thanksgiving homecoming," Della explains. "For 30 years we all went to Grace and Virgil's house, but now we have it here (at the Cannon County Senior Center)." About 85 or 90 family members show up each year, she adds.

All four of them enjoy spending time at the Senior Center, and often have lunch together there. Della and Grace also enjoy working jigsaw puzzles at the center. It's another family tradition that they learned from their mother when they still were the little Frazier girls.

Another important part of both couples' lives has been participation in their church. All four belong to United Methodist Church in Woodbury, where Virgil teaches the Friendship Class for seniors. He says he has to really study to keep up with the class.

"Most of them have been around so long you can't just make stuff up, they know what the Book says," he adds with a smile.

Both couples say the secret to their long, happy marriages lies partly in that tradition, but also in staying busy and having fun together.

Nile adds that they've never had any serious trouble: "No fist fights or nothing like that."

Virgil claims to agree with a preacher he met who said that while he and he wife sometimes had problems, he tried "never to let her find out."

Grace has another way of saying laugh at your troubles: "The first 20 years are for love. The second 20 are for money, and the next 20 are for pure spite." Then she adds, "It must be love, I reckon."

She also says Virgil's sister Willie Pearl said they wouldn't last six months. "But then when we came home three months later, she gave us two bed pillows, so I guess she decided we'd last."

And last they did. Apparently when two brothers marry two sisters, it's a recipe for successful marriages.