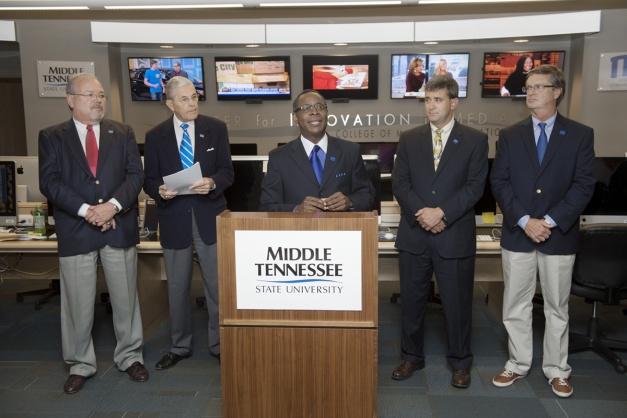 The Volunteer State’s impactful, sometimes tumultuous and colorful journalism profession will be honored forever in the annals of the new Tennessee Journalism Hall of Fame based at Middle Tennessee State University in Murfreesboro, MTSU officials announced Friday, Oct. 19.

“There could not be a more appropriate location than within the premises of MTSU’s internationally-recognized College of Mass Communications,” noted Murfreesboro Mayor Tommy Bragg, whose family has a rich, storied history of newspapering in Middle Tennessee.

“Plus, being the geographic ‘heart’ of Tennessee, we love the idea of the Hall of Fame being headquartered in Murfreesboro,” Bragg added.

“The College of Mass Communications is extremely pleased to have the unique opportunity to partner with the new Tennessee Journalism Hall of Fame to be located in the Bragg Mass Communications’ Building,” Dean Moore announced. “Tennessee has a rich heritage of producing so many outstanding, nationally and internationally-known journalists across the mass media.

“We are also proud that the annual awards/induction recognition will be part of our annual Wall of Fame and Student Awards in the spring of 2013,”Moore added.

The business community is supportive of the effort.

“The opportunity to house the Tennessee Journalism Hall of Fame at MTSU is a real privilege for our community,” Rutherford County Chamber of Commerce Chairman Peter Demos announced. “This is yet another chance for people to visitRutherfordCountyand see the amenities our community provides.”

The community, university and media came together as a result of the new Hall of Fame.

“We’re honored to be welcomed into the halls of MTSU’s Mass Com complex, home of one of the most prestigious journalism programs in the United States,” confirmed Ron Fryar, former president of the Tennessee Press Association and current publisher of the Cannon Courier and Murfreesboro Post newspapers.

“The Tennessee Journalism Hall of Fame is an ‘all-inclusive” hall that will include all major facets of media, including newspapering, television, radio, electronic and public relations,” described scribe Whittle.

“Our idea for an ‘all-inclusive’ Hall of Fame came from MTSU’s Mass Com program, that encompasses all aspects of modern day journalism education, including the electronic era of communications,” accounted Penuel, a former media spokesman for the National Guard who worked with media outlets and professionals throughout Tennessee.

“We’re in the process of forming the initial nomination committee with the responsibility of establishing criteria for consideration of (living and deceased) candidates from throughout the greatVolunteerState,” Penuel added.

Anyone needing more information about the Tennessee Journalism Hall of Fame can visit our web page at tnjournalismhof.org or contact Dan Whittle at danwhittle@comcast.net, Ron Fryar at  rfryar@cannoncourier.com,  Hooper Penuel at hhpvote@comcast.net or Larry Burriss at lburriss@mtsu.edu.