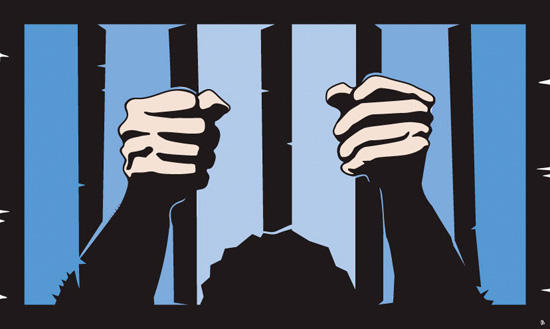 Crime prevention costs the taxpayers of Cannon County over $1.6 million per year.

Cannon Countians spend almost as much money each year housing, guarding, feeding and caring for county jail inmates as they do putting deputies on the streets to conduct patrols, respond to emergencies and investigate crimes.

According to Cannon County Jail Administrator Ed Brown there are, on average, 65 inmates at the jail every day of the year. About a third of those are female.

Based on the current fiscal year's budget of $759,783 to operate the facility, inmates as a total cost taxpayers nearly $2,100 every day of the year.

The jail does receive some money for state prisoners it houses, on average about five per day, but the $35 per day falls short of the amount it costs, Sheriff Darrell Young said.

The bulk of the jail money is spent on corrections officers, or guards, of which the jail normally has 10. Brown said one guard quit on Tuesday of last week, which is a frequent occurrence.

"The pay is not very good, relatively speaking, so we have a lot of turnover in manpower," Brown said.

Brown said two guards are on duty on both the day and night shifts. There are also guards who work "power shifts" which are from 1 p.m. to 1 a.m.

Another large jail expense according to Brown is transporting prisoners. That involves transporting them from the jail to the courthouse for court, going to surrounding counties and bring them here for court, and taking them to doctor's offices for medical care.

"One week alone we might burn six or seven tanks of gas just getting them (inmates) places they have to go," Brown said.

Included in the yearly expenses of operation the jail are:

Print
Members Opinions:
[Delete]
Does it make any sense to force them to work somewhere, on a farm or road crews. Surely some of them could be considered for trustee positions?

What about coming up with a drug that is garanteed to take a certain number of years off their life, or just give them access to Meth, which would do the same thing?

No, but seriously it would be good if we could come up with a way to have them pay their way through it.
ftenpenny
[Delete]
Why are we spending 181.00 per day on food.Some one should see how much waste is here.Are we giving them coffee,sugar.salt an pepper,deserts??.I for one would like to see the daily menu posted in The Courier.I am told that Rutherford Co.charges for any extras.Someone should call Sheriff Joe in Az.he has his meals down to less than $1.00 per prisoner per day.Myself an alot of others have had to cut back.why should inmates eat better than a lot working people
[Delete]
I calculated $.2.41 I took the number of inmates, gaurds, and kitchen personnel (approx 75) x 365 days = 27,375 divided by the $66,100 and arrived at my number, two dollars and fourty one cents. Do I need correction?

[Delete]
Actually trustee is not the proper spelling for an inmate entrusted with some additional outside responsibilities. It should be spelled trusty.