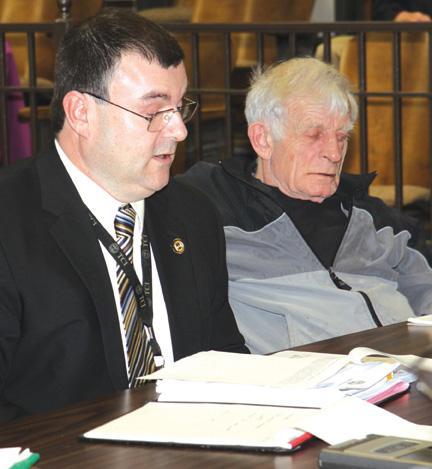 Jim Hart, a County Technical Assistance Service (CTAS) jail management expert, agreed to conduct the study, catching some county officials off guard due to the "very informal" nature of the meeting.

TCI's Bass urged county officials to "meet monthly, talk strategies and come up with a plan for the future."
County Executive Gannon agreed to appoint a committee to do exactly that.

The Cannon County Jail is chronically overcrowded.
On Oct. 3, TCI looked at the jail population, which was 73 inmates, Bass said. "That's 30 over" the approved population of 43.

Bass said 89 percent of the inmates were repeat offenders.

When the jail was inspected again Tuesday, the total of prisoners was 63, which breaks down to 48 male, 15 female and 10 state prisoners.
"One thing that stands out for you is the extended stay for prisoners in a pre-trial status. Your totals are a little eschewed," Hart said.

Deputy Director Howell urged the formation of a committee to specifically target overcrowding at the jail.
"You in a committee would be better off taking a look at it … take a serious look and just don't ignore it. "If you don't do it that's when the problems arise," Howell said.

"You need representatives from the courts, the sheriff's staff, county commissioners," Hart said.
Once formed that committee needs to closely examine all aspects of criminal justice in Cannon County, he said.
"I call it turning over every rock," Hart said.

Howell told the local officials one area they need to strongly consider are the prisoners being held prior to their trial.
If you take half of your pre-trial defendants, you could be below the recommended jail capacity, he said.

The first was "it is the duty of the county legislative body to erect a courthouse, jail, and other necessary county buildings."

The second was that county buildings "are to be erected and kept in order and repair at the expense of the county, under the direction of the county legislative body, and it may levy a special tax for that purpose."
"I know you don't want to do that," Howell said.

The third law dealt with jail specifications, saying the jail "shall be of sufficient size and strength to containing and keep the inmates security confined.

"A county jail isn't going to last a lifetime," he said. They undergo heavy use 24 hours a day, 365 days a year. "Inmates do have rights."

The three state officials said Cannon County wants to avoid getting federal courts involved in the issue.
"If a judge wants to order a new jail, they decide everything. It's not left up to you," Howell said. "Typically they will say you need this and you've got to open up your checkbook."

"I would rather us to have a say-so," said Commissioner Jim Bush.

"You are one violent inmate away … an inmate who kills someone or seriously injures them or rapes them," Hart answered.

"We are making you aware of this issue and you should act upon it," Bass said, citing the example of the Shelby County jail system. The U.S. Department of Justice has been in control of the Memphis jails for 11 years. "That is something that never goes away," he said.

Starting a CTAS study is a start, but "there's no crystal ball" due to the many outside factors, Bass said.