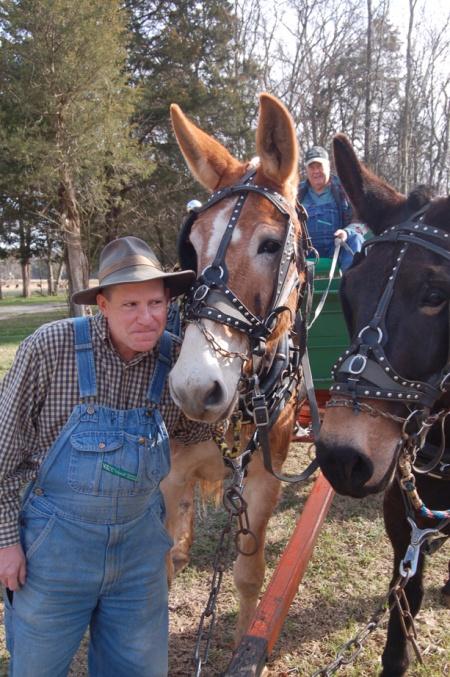 Did you know a donkey is smarter than a mule?

However, lifelong mule man Danny Fraley was carefully out-of-earshot of mules "Leroy" and "Lucky" when sharing this barnyard measurement of intelligence.

"And a good mule is more intelligent than your typical horse," added Fraley, whose love for mules goes back to the late 1940s.

"I can't remember not liking mules, been working them since 3 years old, back on the old family farm," noted Fraley, age 66. "When Great Uncle George Fraley would drive by our farm house with his team of gray mules named Dick and Kate, I'd slip out, catch on to the back of the wagon, and ride down to his farm.

"And when I got back home, Daddy (the late J.L. Fraley) would bust my butt," Fraley recalled.

But, did that cure him from hitching a ride with Uncle George and Dick and Kate?

"No, the next time Uncle George would come by, I'd slip out of the yard, latch on to the coupling pole on back of the wagon, and after we'd gone a little distance, I'd finally crawl up front and let my uncle know I was on board," Fraley noted. "And, sure as shoot' in, I'd get another whipping from my daddy…that'd last me until the next time Uncle George and his mules came down our farm lane."

Distillery Mule Demonstration Day (set this coming Spring) are two "show off" events that excites mule devotees such as Cannon countian Bill Smith and Rutherford countian Fraley, both of whom belong to the  Middle Tennessee Mule Skinner's Association based in Woodbury.

"We have a strong membership, with members in Lebanon, Franklin, Watertown … scattered throughout Middle Tennessee," Fraley itemized. "We realize that it was mules that brought America where it is today, especially in pre-engine days in harvesting timber and working in agriculture.

"Presently, I'm getting my main mules, Leroy and Lucky, ready for Mule Days, which kicks off each year with a mule ride from Henry Horton State Park to Columbia, a distance of 23 miles, which we cover, with police escort, in a day's time," Fraley noted as he stroked his prized mules with obvious affection.

"We plan to ride with Danny and the mules at this year's Mule Days," reserved Smyrna resident Randolph Salyers.

If circumstances work out right, Leroy and Lucky, may replace "Ed" as Hollywood movies stars with big ears.

You read it right: "RFD Network, the same network that features banjo man Leroy Troy each Saturday night on the Marty Stuart Show, has an interest in coming and filming when we disc and till some dirt this spring at the Short Mountain Distillery.

"Plus, there's a Hollywood movie man that has spoken with the Mule Skinners Association, interested in producing a film, featuring some of our prettiest and most intelligent Tennessee mules," Fraley shared.

"Leroy loves to have his picture made," Fraley shared as Leroy nuzzled up closer to the latest photographer making pictures on Fraley's 35-acre farm on Baker Road on the outskirts of Smyrna city limits.

A good mule can live into its forties. And they're very loyal to their team mates.

"Uncle George's grays lived into the forties," Fraley noted. "He worked them as a team until their early 40s.

"A friend sold one of his mules, but when he did, the mule that had been working as a team, hollered and brayed until the day he died," Fraley shared.

"I've heard it told that a mule up in Missouri committed suicide, after its pulling mate died while plowing out in a field," Fraley added. "The mule left behind, got out of its barn a few days later, walked to the nearby railroad tracks, and stood there until the train came and ran over it … with the farmer and friends trying to talk the mule off the tracks."

The "mule moments" that Fraley enjoys most?

"Taking Leroy and Lucky and the wagon out to remote roads, taking a nice and easy and quiet ride in the country, that's living mighty good," Fraley brayed while holding the reins on his prized team. "When you're out there, in a long wagon train, where there's no traffic, it doesn't get any better."

It's obvious that Fraley also enjoys tilling and disking his 2-acre garden each spring as his farm family of jennets, donkeys and mules look on from the nearby pasture.

Print
Members Opinions:
poplarbluff
[Delete]
Leroy Troy, with his likeness mule named Leroy, is the most popular entertainer to perform at the fabled Arts Center of Cannon County....