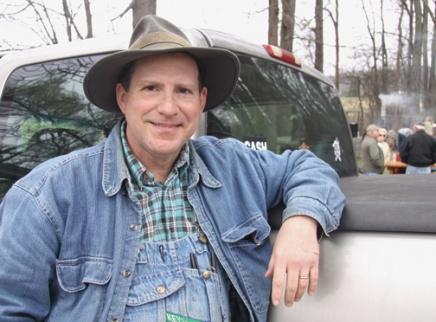 SHORT MOUNTAIN - Make the recipe, and "they" will come.

But in this new century, the manufacturing of clear whiskey on the mountain is legal.

(Click HERE to see more photos from the event.)

This past Saturday, between 1,500 and 2,000 visitors again flocked to the mountain top where Short Mountain Distillery professional moonshine makers celebrated their firm's one-year anniversary with a mountain-top Hootenanny celebration.

"We're no longer ashamed to be seen on the mountain for moonshine purposes," advised visitor Jeffery Lambert, of nearby DeKalb County. "Early last century, my folks made 'shine,' for economic survival purposes, and sold it in and around Gassaway, Liberty and Alexandria."

A colorful little rooster, belonging to musician Richard "Squirrel" McLain, proved to be one of the biggest fan attractions at the Short Mountain Hootenanny.

"I've only had my rooster a few days, so he has 'no name' as we speak, but you can see he's already a crowd pleaser," noted the musician as he measured his tiny fowl's huge fan appeal.

Amazingly, the little cock of the mountain seemed to strut more when his owner strummed and tuned his banjo as a member of "The Jimalong Josies," a Smyrna-based group that plays "'50's music."

High-priced, lop-eared mules were even gussied up for the day-long celebration.

"My mules hauled a man from Liberty, a lady from Wisconsin, a gent from Miami and a former moonshiner from the East Kentucky mountains," verified Rutherford County mule man Danny Fraley.

Cannon native son Ronald Lawson was at the Hootenanny wearing three hats, first, as a prized moonshine-making empl-oyee of the Distillery, a card-toting Mule Skinner, and being the grandson of the late Hershel Lawson, a legendary "'shine-man" from over in nearby DeKalb County back in the early part of last century.

"I never dreamed as a little boy, that one day, as an adult, that I would be making legal moonshine up here on this mountain," Lawson noted as blue smoke floated skyward from the Distillery's nearby model "moonshine still' on display for the tourists.

For the past year, Short Mountain Distillery has been an official legal manufacturer of white, clear whiskey known as "Moonshine," a slang term given the product back in the early 1900s when the then illegal product was made at night, by the light of moon.

"Here, have a legal snort on Short," invited Distillery Director of Hospitality John Whittemore to Allen Morse, a resident of nearby Gassaway, an unincorporated village that sits nestled down in a valley at the foot of majestic Short Mountain.

Jeff Shuler is the Distillery's recognized story-telling historian who volunteers regularly as a tour director.

"When the Distillery first opened, I developed a keen interest in the history of moonshine in Cannon County, but also the important history and heritage of Short Mountain," Shuler added. "As you can tell by the turn-out of visitors today, other folks like to experience colorful Short Mountain history, up close and personal."

Short Mountain whiskey-making has been known far-and-near for a long time, as evidenced last century when infamous gangster Al Capone marketed it as "City Rum" on the streets of Chicago.