In Cannon, We Trusty 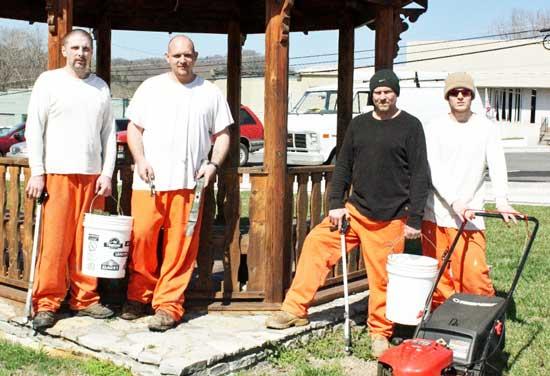 Cannon County Jail inmates, including from left Jason Brown, Dustin Alsup, Mithcell Orr and Andrew Asbury, perform work around the Cannon County Courthouse.
Everyone makes mistakes. It's part of being human. What's important, however, is what we learn from our mistakes and how we are changed in the process. Of course, different mistakes have different consequences, and some mistakes can even land you a stay at the county jail.

Maybe we've been watching too much TV, but somehow, we've come to believe that every correctional facility is filled with axe murderers and drug kingpins. In reality, most inmates are incarcerated for misdemeanors or violating the terms of their probation. These are our relatives, neighbors, and friends, not remorseless criminal masterminds. They messed up. They made some bad decisions, they know it, and they've got to live with it. Well, until the time machine comes along, living with our mistakes is just going to be a fact of life. We can't change the past, but we can hope for a second-chance, an opportunity to be better in the future.

I'm proud to live in a county that provides an opportunity for inmates to better themselves and contribute to the community. It's called the Trusty program. Trustys are nonviolent, low-risk inmates  who, through good behavior, qualify to participate in the program. They provide a variety of much-needed services to our community that, frankly, the county couldn't otherwise afford. I thought they were just the guys in orange who picked up trash on the side of the road every once in a while, but as it turns out, they do a whole lot more.

I spoke with Mike Gannon, County Executive, Daryl Fisher, Head of County Maintenance, Russell Paschal, Head of Litter Control, and some Trustys to get a better idea of the Trusty Program, what they do, and their place within our community.

The Trusty program is a cooperative effort between the county government and sheriff's department. Inmates who qualify may work as Trustys with County Maintenance, Litter Control, or Jail Maintenance. These programs are supervised by certified correctional officers and allow the Trustys to work off some of their sentence by performing services for the community. Each day worked counts as two days of jail-time. This is a huge incentive for them and promotes good behavior and positive rehabilitation, the skills they need to function in society. Social skills are not the only thing the program teaches, either.

Robert Orr, a Trusty, was an auto-body technician before he violated his probation. He says,"I've learned trades like wood-working and landscaping that I knew nothing about before." Dustin Alsup, another Trusty, says, "I was a commercial plumber before I violated, but through the program, I've picked up some new tricks of the trade and learned a lot about electrical work. I look at this as an opportunity to learn viable skills and repay my debt to society while also reducing my sentence."

I asked Daryl Fisher to name some past and current projects he and the County Maintenance Department had worked on. I had to cut him off before I ran out of ink. Here's the Cliff Notes version; Nearly all the new landscaping at the courthouse (including tree removal and laying all the sod), refinishing the courtroom chairs, building cabinets and bookcases for the schools, 2700 square-feet of ceramic tile at the Lions' Club, rebuilding a workshop, a new fence and preventative maintenance at the swimming pool, as well as mowing, weed-eating, and other landscaping at the horse arena, fairgrounds, and numerous other public places. So, how much does all this work cost the county? One man's salary, gas, and tools. Pretty good deal, huh?

Russell Paschal supervises Litter Control. This is way more than just occasional picking up trash on the roadside. The Trustys clean up illegal dump-sites, dispose of tires, and haul off fifteen truckloads of trash per week. This doesn't cost Cannon residents anything; Russell's department is funded by a state grant.     Last week, I took a walk down my road, and I was disgusted at the amount of random garbage building up in the ditches. I told myself that tomorrow I would get a trash bag and clean it all up. Well, when I woke up, Russell and his crew of Trustys were in front of my house doing just that. I thought to myself, "This is nice, but I'll still have to go get what they missed. They're just inmates killing time. They don't care if they've done a good job or not." So after they'd passed, I got my trash bag and went out to the road. I couldn't find a single speck of trash anywhere! I was impressed. Thanks, fellas.

Mike Gannon is a huge proponent of the Trusty program, and he'd like you to know about the benefits it has for our community. "If it weren't for the Trustys, this work simply wouldn't get done," he says. "They provide an invaluable service by maintaining our public buildings, parks, and roads. The program allows inmates an opportunity to get out  and function in the same community they'll soon return to."

"It's important to remember, Trustys aren't sex-offenders or violent criminals," he adds. "They're just folks, like you and me, who made a mistake. I knew a lot of these guys before they were inmates, and I'll know them when they get back out. In my eight years here, I haven't had any problems from these guys. They do good work and are appreciative of the opportunity." "In fact," he jokes, "they're often easier to get along with than 'normal' employees."

"This program exists in order to use available resources the best we can for the benefit of everyone. It's a win/win situation," he continues. "I'd like to raise awareness in the community about the program, and hopefully expand it." Currently, only male inmates are allowed to become Trustys, but Mike would like to create a female Trusty program as well.

There are two important things to remember regarding the Trusty program. First of all, just because someone has on orange pants doesn't mean they killed someone. The folks you see, outside the courthouse or on the roadside, working hard, made little mistakes. They're trying to get back on the right track, If it was you, wouldn't you want a second chance? The term "Trusty" means the same thing as "Trustworthy." They've proven to the sheriff and their supervisors that they can be trusted. Now it's our turn. Secondly, they're cleaning up our mess. They're making our county a nicer place to live. So, the next time you see the Trustys out working in the community, don't look away nervously like you're being stalked. Give them a friendly wave and let them know you appreciate what they do.