IDB debate gets heated at Commission 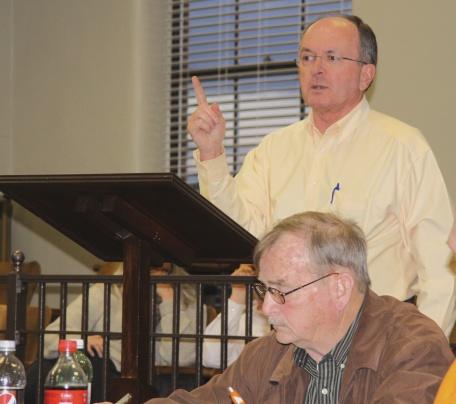 Mike Gannon makes a point during the discussion.
By MIKE WEST/Courier Editor

"Our request is this: Can we handle our own financial matters?" IDB chairman Randall Reid asked the Commission.

Reid and Doug Bodary, IDB vice-chairman, stood before the Commission for better than an hour and outlined problems faced since the reforming of the IDB last year.

"It's all speculation. All a bunch of bull," Gannon said.

Reid said the IDB members have spent the last several months trying to determine exactly where the panel stood.

The process began when Reid approached new County Commission Chairman Bob Stoetzel last summer. Stoetzel dissolved the old IDB board and appointed a new one with Reid as chairman.

Reid had served on the panel for seven or eight years but "we met for the first time with a quorum last June."

The IDB soon deter-mined that it was facing a net loss of $30,633 with the potential for a larger loss.

"I assume if the board had defaulted the county would have been responsible," said Commissioner Kevin George.

Some $900,000 was spent and it was not approved by the board or the county commission, he said. Two other loans weren't approved either, but "the county was pledged for these loans," Bodary said.

"That's why we were hustling to sell property," he said. A hillside next to the Cannon County Convenience Center was auctioned off as was a small building on Bryant Lane.

The situation was so confusing that the IDB bought equipment it already owned, Reid said.

Cumberland Molding had $200,000 worth of equipment and when it declared bankruptcy the IDB paid $18,000 to purchase it. When Reid and IDB member Dean More went to the building to inspect it "we found junk and one good air compressor."

When IDB paid the $18,000 the money went to a second creditor and not the bankruptcy court, Reid said.

"We purchased what we already owned," Reid said.

All of this confusion prompted the IDB to ask the financial dealings of the committee to be removed from the county executive's office, Bodary said. The panel intends to hire a CPA to handle IDB's finances for a cost of about $800 a year.Commission Chairman Stoetzel said a vote on that would have to be delayed until the County Commission's April meeting.

Bodary said the IDB had no objections to delaying the vote until April.

County Executive Gannon said, "I'm 100 percent in favor of what they want to do."

"I don't pay anything that Randall Reid doesn't give me a go-ahead for," he said. "I don't vote on anything."

Gannon said his function with the IDB was bookkeeping only.

"This is the first I've heard of any of this," Gannon said.

"My question is, are we sitting on this or is someone else going to investigate," asked Commissioner George.

Reid said the information collected by the new IDB committee has been submitted to the Tennessee State Comptroller's office.

Stoetzel called a five minute recess to let the situation calm down.

"This bickering back and forth has got to stop," Mooneyham said. "Whether he acts on it or not, it's his (Whitesell's) decision.

Print
Members Opinions:
celtvoc
[Delete]
I just want to commend the IDB for their service in trying to get this straighten out. The IDB has made a lot of progress in the right direction.