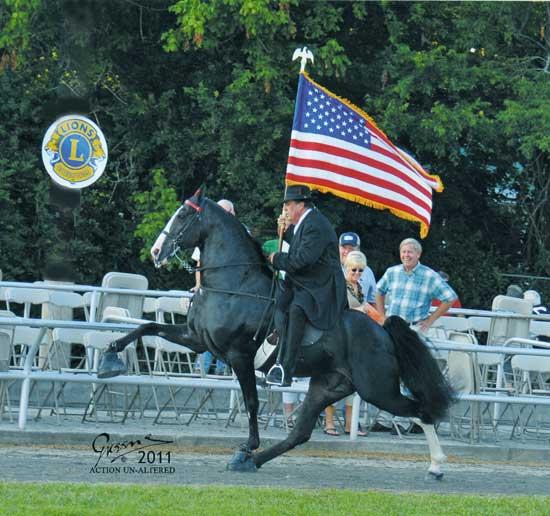 Hundreds of patrons braved the scorching heat to enjoy the 73rd annual Woodbury Lions Club Horse Show at Clayton Glenn Champions Arena Saturday (July 2) but this has become the norm through more than seven decades of one of the greatest one-night events in the industry.

The Woodbury Lions Club Horse Show has withstood the test of time and competition within its industry by providing a first-class event that attracts hundreds of outstanding entries and some of the top trainers and riders in surrounding regions.

"We always look forward to this event," said Isaiah Gossett, a Georgia native who says he plans his Fourth of July Weekend around the Woodbury Lions Club Horse Show. "The show is always great and the hospitality is even better."

"It is not that we do the same thing every year but we are consistent, and I believe people like that," Patrick said. "We had another outstanding show this year and it's always important because this is one of our major fund-raisers for the Lions Club."

More than 200 horses competed in 40 classes during the 2011 Lions Club Horse Show, which has been voted the nation's best one-night show nationally through the years.

Some of the World's best horses have shown in Woodbury, whose Lions Club is the only one in the world that has had two International Presidents - Dr. Walter H. Campbell and Austin P. Jennings. These world-class competitors provide a sneak peek of what could lie ahead. Riders from 4-to-70-plus years of age competed in 40 classes this year.

"We were pleased overall with the number of entries and the quality of the show," said Horse Show Chairman Bruce Steelman. "A great deal of work goes into this event and many people put it a lot of hours to make it go but when you see how much people enjoy the show it makes it all worth it."

When the Woodbury Lions Club Horse Show began announcer Bobby Sands announced, "This is legendary ground we are showing on tonight."

Many spectacular horses have shown at the Woodbury Lions Club Horse Show and go on to secure stardom.

This year's outstanding event may produce the next great one.