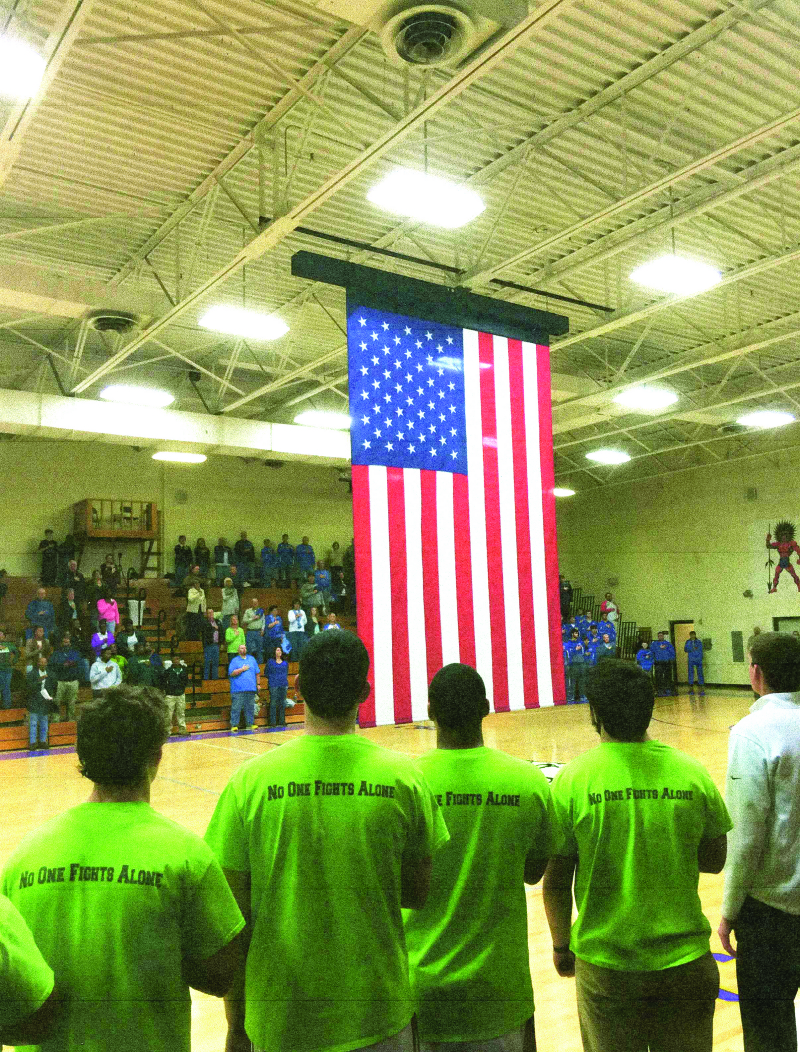 Once erected, this is how the new flag will appear.

Cannon County High School was the recipient of a special gift Thursday night.

Huff & Puff Trucking Co. is presenting a huge American Flag to hang from the ceiling of Robert A. Harris Gymnasium.
Cannon County Board of Education members accepted the offer quickly and enthusiastically.

"I move to accept the gift from Huff & Puff and that we get it mounted as soon as possible," said board member Frank Walkup. His motion passed by acclamation.

The flag display is more than a large flag.

Once erected, the big American Flag will descend nearly to the gym floor electronically from a receptacle mounted on the ceiling. The flag will also be illuminated by flood lights.

"For Veterans Day, it will be great," said Chairman Randy Gannon.

Turning to another topic, the board discussed continuing its current indemnity agreement for home school students which to participate in football, basketball and other athletic endeavors.

"The issue is null and void for this year, so we have some time to consider alternatives," Director of Schools Barbara Parker told the board.

Frank Walkup suggested that the county maintain its current policy which requires parents of home school students not in high school to provide their own liability insurance,

Parker said high school students are covered by a TSSAA insurance policy that is already in place. However, there is no policy for grammar school students.

"We would have to be really, really sure that anything that could happen wasn't our fault," Parker said, adding that the board's attorney recommends keeping the current policy.

Parker's contact with the school system was also a topic of conversation during the meeting.

"She just asked me to extend her agreement for one year," Gannon said. That means Parker's contract still has three years left.

Board member Bruce Daniel moved not to extend Parker's contract. Board member Shelley Walkup seconded his motion. Frank Walkup, along with Shelley Walkup and Daniel, voted against continuing it. Voting in favor of the extension were Gannon and Nathan Sanders.

"We didn't spend all of our capital outlay," she explained, which added to the $173,000 balance left at the end of the school year.

The system also received some tax funds in July, which can be added to some reeimbursements and insurance recoveries which totalled $15,000.

Parker also suggested a new way of gaining more public input about the operation of the school system.

"For the lack of a better term, I'm calling it a Board Forum where the public can come in and talk to us in a casual way," she said. "It will be a good public relations tool. There will be no agenda just a meet and greet with the public."

The Public Forum will be a topic of discussion at the September Board of Education meeting.

Print
Members Opinions:
wbrysoldier
[Delete]
Thank you Huff & Puff for the gift of the American Flag!