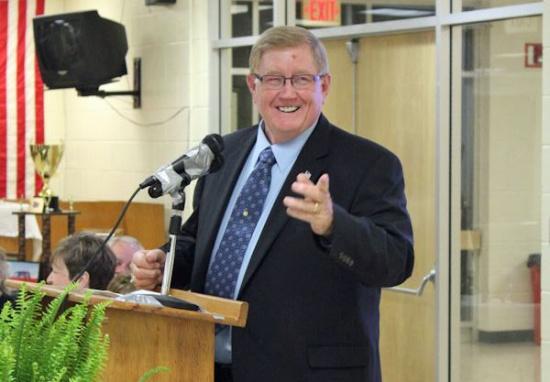 Emcee for this year was local Church of Christ minister Herb Alsup. After Brother Herb opened the gala get-together with a prayer he called upon Rita Allen to come to the podium.

Mrs. Allen is the head librarian for the Adams Memorial Library. Rita has done a splendid job of leading the library staff and is responsible for the direction the library has taken recently. She came to give an update to the audience which was very impressive.

Austin Jennings followed Mrs. Allen with more accomplishments for this last year. An amazing 50,000 persons used the library located on College Street in Woodbury. I don’t know how other small town/county libraries fare, but for a county with a population of 13,000 people that seems to me to be a big accomplishments. Austin told of the ground breaking which recently took place on the expansion project.

Steve Smith also took the podium and this time he was honoring the man who is also known for the cars that he has built and driven over the years. Arna was honored to have had won the title of National Champion for the best car in America. I remember seeing the magazine that highlighted his 1977 Corvette (reddish color if I am not mistaken) some 30 years ago. From that time on I don’t believe Arna had any other vehicle that wasn’t painted red.

Steve also talked about how Arna and Tina had won the most prestigious award that Piggly Wiggly offered to anyone in their business, being named the Operator of the Year in the United States with the Clarence Saunders Award. Mr. Saunders started the Piggly Wiggly.

Tim Spry of the First National Bank here in Woodbury was next and he reminded the audience on how much Arna and Tina were sports lovers and sponsors of the Cannon County School system’s sports programs. Tim said that when it came to advertising Arna played rough. Arna made sure he was the man on top when the fighting was over, a challenge that Tim happily welcomed because Tim is also that way when it comes to sports. He tells of the games where Arna came every time the doors opened and he sat on the first row, usually center court. Tim and Arna helped in getting an electronic advertising banner which sat in front of the score keeper’s desk. One at a time the banner will advertise Smithson Piggly Wiggly and then the next time the First National Bank of Manchester.  At one particular game the electronic banner seemed to be stuck on the Piggly Wiggly name and would not move. Tim confronted Arna about it and it was found that the person in charge of the sign liked country ham a lot, indicating that Arna knew how it got stopped on his logo. Not wanting to be outdone the next game Tim made sure the sign was stuck on his logo and claimed to Arna not only did that man like country ham, but he liked steak even better. There were always some practical jokes going on between these two sports fans.

Mayor Harold Patrick also talked of Arna with great admiration and not only for his accomplishments with his National Champion Corvette but of his friendship with the community and the schools’ programs.

Greg Rogers was the last of the roasters to come up before the audience. Greg, as you might know, is the nephew of Arna. Myrna Rogers is the sister of Arna and the mother of both Greg and Jackie Pitts. Now there is one thing you need to know about Greg and it is how smart he is and how acute his sense of humor is. Before the roast started,  I walked by him and said, “Oh I feel sorry for Arna if you are going to roast him” and Greg said, “I am not going to do anything that will keep me out of his will.” When Greg started his speech and named all of these wonderful attributes I was kind of stunned and disappointed,  I thought for sure he was going to eat Arna alive. This is not what I had anticipated from Greg Rogers.  After a few minutes of these kind words Greg admitted he was actually talking about himself which got a huge laugh and said, “now I am going to talk about Arna”.

Greg talked about how when Arna was young he was a skinny kid who looked like a cartoon character and also how he had also enjoyed having a fast car. He talked about all the stories he had heard of Arna at the River Bridge up on Highway 53 north. Arna always had to have the best car. Greg told Arna how lucky he was to have Tina for his wife. When Greg ended his roast of Arna he ended it as someone who not only did not want to be left out of the will, but as one who had nothing but love and admiration for the man.

It was now time for the rebuttal from the guest of honor, Arna Smithson. Arna to my surprise did not deny any of those accusations which we had been told could be true or not so true by the other roasters. In fact he added to them and clarified them and talked about meeting some local State Troopers. He thanked God on how his life had been great being in the business that he and his brother Adron from his father and mother (Coy and Annie Smithson) retired after being in the grocery business since the 1940’s. He was thankful to his father for the way he was brought up.

Arna was thankful for his wife Tina who was with him through thick and thin. He was also thankful for his loyal employees who had worked for him over the years’, a few he recognized from the audience who had been with him for over 20 years.

Arna and his wife are due their retirement having worked from dawn to dusk at the store and I know that the people who attended the roast wish them the best.  I wish them the best and Woodbury along with Cannon County will always remember them for their faithful service to this community.