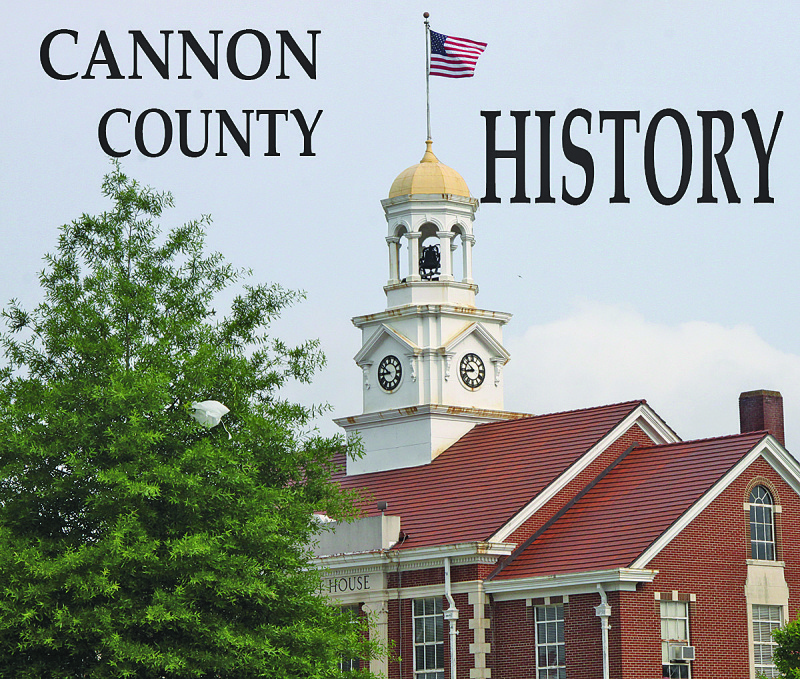 Editor's Note: This is the first in an ongoing series by Cannon County Historian Robert D. Bush.

A "Legislative Act", authorizing a new county to be formed along the east fork of the Stones River also included a portion of the upper waters of the Clear Fork, a branch of the Smith Fork that flowed into the Caney Fork River. [The 'Sander's Fork', drainage area (today's Auburn town areas) as well as nearby streams then part of Wilson County that flowed into this Smith Fork would not be added to the county of Cannon until 1838.]

This same 'Act' of 1836 also named the first commissioners for the new county called Cannon in honor of the newly elected governor of the state, Newton Cannon.

As in the past, procedures for establishing new counties were largely regulated by Tennessee's constitution and its legislature. The new Tennessee constitution, ratified by a state convention in 1835, stipulated all counties to be subdivided into civil districts - counties that were formed in Tennessee prior to 1835 had only designated 'militia districts'.

These new commissioners were Daniel Stewart, James Taylor, William Bates, Henry Trott, Abraham Overall and Leonard Lamberson. According to the late Woodbury judge and historian Sterling S. Brown these commissioners that were appointed by the Tennessee legislature represented sections to be incorporated into this new county of Cannon.

James Taylor was the father of the well-known physician, Dr. Edmond Taylor who practiced medicine at Bradyville after the Civil War. Also, William Bates, who operated 'Bates Tavern' along the Stagecoach Road some distance from the town of McMinnville - he later oversaw the building of Cannon County's first courthouse.

Henry Trott II, the son of Benjamin Trott, (Benjamin is believed to be buried at the Danville town site) an early settler, merchant and lawyer at a small hamlet called Danville. He had been that town's first surveyor. The Trott family, along with the McBroom 's settled early in the vicinity and started a town that became known as Danville. By 1836 Trott was overseeing the surveys for a new county to be formed. He became Cannon County's first Clerk and Master. (the land for the 'Brown-Spurlock Park' was once owned by this Henry Trott.)

Abraham Overall and Leonard Lamberson were believed to have lived in that section of Smith County that included the Clear Fork branch of the Smith Fork. The area was sometimes referred too at the time by legislators as 'surplus lands'.

These commissioners held the county's first court meeting in Henry D. McBroom's house. There has been some debate since then suggesting this first court meeting was not held in McBroom's Tavern, claiming it was not built at the time. Instead, this first court meeting was held in McBroom 's home. It was later on that he built an Inn and storehouse at Danville? It still could, however, be debated either way? Some early merchants about the area in 1836 were Henry Trott Jr., James T. Trott, Joseph Ramsey, Parker F. Stone, Nathan Neely, and later Henry D. McBroom - not more than a hundred inhabitants lived about the town site.

The first sessions of the circuit courts were believed to have been held in Henry D. McBroom's home also. The early Cannon county court did meet in McBroom's Tavern later on, since there was no courthouse for two years. Early Cannon County court minutes also state various court trials and sessions were held from time to time in 'Fisher's Tavern.'

The commissioners, during this first court session proceeded to vote on this 'stage stop' called Danville as the new seat of Justice. The motion carried. There arose opposition on this move almost immediately. One group, described by the late Dr. Robert Mason as the 'Liberty faction'- settlers living in the so-called 'surplus lands' around the Clear Fork area- raised concerns about not having much of a say at this meeting. They also reaffirmed their support for the county seat to be placed near the Adam Dale settlement at Liberty. The quick action taken by these first commissioners haunted the politics of the new county of Cannon for many years following its creation. (continued)