Highway 70S plan to be put to vote 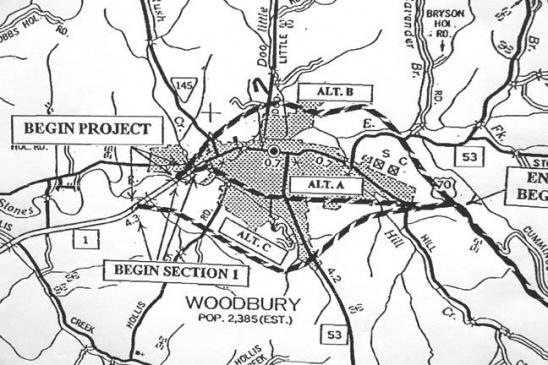 Debate over completion of state Route 70S is going to be put to a public vote this August.

That was the conclusion of a public forum on the highway project held Thursday (Jan. 23) at the Cannon County Courthouse.

Woodbury Mayor Harold Patrick and Cannon County Executive Mike Gannon agreed that a public vote is the best way of resolving the issue. Election Commission Chairman Corey Davenport said the August election would probably be the best time for the referendum.

Wes Hughen, TDOT director of development, along with two other TDOT officials were present at the meeting to offer information about the road project.

"You really need to consider your town and the effects of a bypass," Hughen said, suggesting that the two mayors really need to talk to the mayor of Pikeville which was bypassed by a TDOT project.

Pikeville, according to U.S. Census records, has suffered a drop in population since completion of the roadway. In 1980, Pikeville had a population of 2,085. The estimated 2012 figure was 1,601.

Following the session, one Cannon County Commissioner suggested that Auburntown should be considered too. The only other incorporated community in Cannon County, Auburntown lost nearly all of its businesses when the bypass was completed.

County Executive Gannon told the 80-plus in attendance "the purpose of this meeting is to hear what the public has to say.

"No decision has been made, no money appropriated," Gannon said. "It's going to affect the citizens of Woodbury more.

"I live five miles out of town and the citizens of Woodbury's voices need to be heard and should be weighed a little heavier," he said.

Hughen said the state does have completion of 70S on the books, but no way of funding the project.

"Back in the early 90s, it was said there were only two proposals in the project. Is that still so?" Mayor Patrick asked.
Actually there are four or more routes being considered, Hughen said.

Two of the routes go south of Woodbury, one to the north, one through Woodbury and one transforming Main Street and Water Street into one-way streets in and out of town. Another option is not to build the road at all.

"You make the recom-mendation and it goes to the RPO," Hughen said. RPO stands for Rural Planning Office. Cannon County is included in the Center Hill RPO which also includes Cumberland, DeKalb, Putnam, Van Buren, Warren and White counties.

"Do we actually have a choice is what I'm asking," asked Dean More, a member of the Cannon County Industrial Development Board.

From the RPO, the final decision is made by the Commissioner of Tenn-essee Department of Transportation.
"I don't make the decision the commissioner does," Hughen said.

"The best dollar buy would be going through town," he added.

Both mayors Gannon and Patrick are members of the RPO, Hughen said.

"Who's benefiting from this project? Why are we even discussing it? Who benefits from putting a road through our town?" asked Woodbury resident Elizabeth Pease.

"TDOT doesn't have a dog in this fight," pointed out Corey Davenport.

Several citizens said they would prefer a bypass around Woodbury.

"My point is we could have a four-lane all the way to Cookeville," one woman said, pointing out that would provide much quicker access to Interstate 40.

Donna Williams, who lives on a family farm out the McMinnville Highway, said "I really feel that Woodbury is a destination already." A bypass won't hurt the town.

"I've already given up eight acres of the family farm, that's why I'm willing to see the project completed," she said.
"My question is … is this going to bring more jobs to Cannon County. That is what we need to focus on," said Lisa Shoate.
"We don't need a four lane highway. That's going disrupt Woodbury and Cannon County," said Faye Northcutt-Knox, a member of the Woodbury Board of Mayor and Aldermen.

"Doing nothing is not an option," said Randall Reid, IDB chairman. "We've got to get in line to get the money. It will be 15 or more years before we have a finished road.''

"The gentleman said we have a dilemma," said citizen Fred Fann, who recalled stories of his grandfather driving hogs on foot to Nashville. "He had to negotiate will all the landowners."

Cannon Countians must look to the future, 50 years from now, to make a decision, Fann said, "to do what's best and what fits."

Print
Members Opinions:
[Delete]
Mike, excellent coverage. Thanks!
[Delete]
It is premature about the headline “Highway 70S plan to be put to vote” because it is not confirmed that this will actually be put to a vote yet.
Currently as it stands, it CAN NOT be put on a referendum because the county does not have the authority to do that per Beth Henry Robertson with the State Election Commission.

In order for it to be placed on the ballot a special act would be needed from either State Senator Mae Beavers or State Representative Mark Pody and approved.
I have sent that information to County Executive Mike Gannon via email and I have talked directly with Woodbury Mayor Harold Patrick.

My suggestion to both was if they want this put on a referendum then they should present that to the County Commissioners at the next meeting to discuss and approve and then a resolution be passed to ask Senator Beavers or Representative Pody to ask for a private act allowing us to vote on the road issue in August. Otherwise, this will NOT come up for a public vote.

All I was asked to do was contact the State of Tennessee Election Commission and see if it could be placed on the ballot. At this time the answer to that is NO.