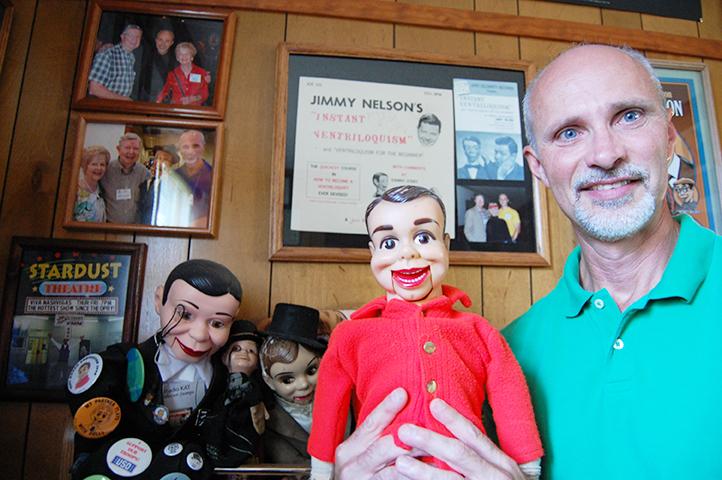 David Turner holds Danny O’Day, his first dummy, a Christmas gift from his parents when he was in the fifth grade. The album and photo on the wall in the background show ventriloquist Jimmy Nelson, one of Turner’s mentors,

David Turner not only makes his own friends, he speaks for them every chance he gets.

Turner, 54, who has been “throwing his voice” since he was about 10, proves a rare talent for a ventriloquist. He builds most of his dummies from scratch before he adds them to his stage act.

“I never did think that playing with dolls would carry me this far,” joked the man who counts wood models of Johnny Cash and Willie Nelson among his bosom companions.

“How I got interested was when I was in the fifth grade,” began Turner. “One of my best friends came to school with a Sears & Roebuck catalog. He flipped to a page and said, ‘Right here’s what I’m getting for Christmas.’ And I said, ‘A doll?’

“So that evening I went home and got our Sears & Roebuck catalog and told my parents, ‘This is what I want for my Christmas present.’”

Turner, who claims Alexandria as his home, got his wish, a dummy named Danny O’Day, a copy of the one made famous by ventriloquist Jimmy Nelson. (Nelson and his talking dog Farfel were seen on TV by millions of baby boomers back in the day in Nestles Chocolate commercials.)

Along with the dummy came an instructional album to help Turner learn the basics of ventriloquism.

“It taught you how to say your ABCs [with your mouth closed]. I sat in front of the mirror and practiced talking like that dummy,” recalled Turner, who soon was taking Danny to school and performing skits.

“In junior high, the kids made fun of me, so I put him down and never picked him up until after high school. When I was about 18 a friend at church asked me to do a show for the kids,” Turner said, happy he got back into the act.

Nowadays, he keeps approximately 45 dummies or puppets in the “dummy room” that he converted from his garage. He created about a third of these including Cash, Nelson, Jimmy Durante, biker Harley, bum Otis and the Short family: Tad Short, Ima Short and Electric Short.

One wall of the room is plastered with about 60 photographs of famed professional ventriloquists, most of whom he has met, such as Willie Tyler (and Lester) and Jeff Dunham.

After returning to ventriloquism, Turner bought some professional dummies and made the acquaintance of Shannon Schrum, the resident ventriloquist at Opryland. Schrum told him about an old pro, Col. Bill Boley of Hopkinsville, Ky.

“I was interested in buying some of his dummies. He made them and sold them. I called him and Col. Bill said, ‘Come on up.’ He showed me all of his dummies, and I brought two from him,” Turner said.

“Later, when the string broke on Doc, I took off the back of the head and looked at all the mechanics inside. I said, ‘I believe I can make these.’ The first one I made was Willie Nelson because I could do a high voice.”

Turner’s dummies perform a full range of animatronics with their faces. They blink and cross their eyes, wiggle their ears and eyebrows, open their mouths, stick out their tongues and snarl.

“I’ll show you my downfall: sewing,” says the woodworker of one of his skills when it comes to the finishing touches. He holds up his dummy Tater Head and says, “I think I sewed his ears on upside down.”

A bench machinist at Textron for 35 years, he constructs his dummies from planks of bass wood by gluing the boards together. He carves the head, cuts it in half and hollows it out. Then he cuts holes for the eyes and mouth. After he puts in the springs, pulley and brass tubes, he hopes it works.

“Then I bring it to life,” said Turner. “What’s great, here is something you’ve created from start to finish and then you create its character. On stage you play two parts: Your part and its part.

“For each character I try to give a different voice,” said Turner, whose repertoire features more than two dozen voices.

“I think anybody can do this,” he said modestly. “Throwing your voice is just an optical illusion.”

The ventriloquist pens most of his scripts but admits he borrows heavily from classic corny jokes from yesteryear. What sets him apart, besides building his own co-stars, is that most of his dummies sing.

His Johnny Cash warbles “Folsom Prison Blues” and “Ring of Fire,” while Nelson Willie croons “Mama Don’t Let Your Babies Grow Up To Be Cowboys” and “Always on My Mind,” among other hits.

“I do more senior shows than for kids. My target group is age 50 and older. They get all my old jokes and don’t get up and run around during my show,” said Turner. “I just really enjoy making people laugh. I have more older people say, ‘I needed that. I haven’t laughed that much in years.’”

Since 1995 Turner has attended the annual Vent Haven Convention in Fort Mitchell, Ky., an event that draws 600 of America’s top ventriloquists. Not only has he met many of his ventriloquist heroes there, like Jimmy Nelson, but he has performed for them at the convention.

He has also performed in more than a dozen countries on four tours for the Department of Defense, entertaining American military members and their families in Turkey, Italy, Greece, Spain, Norway and Cuba.

But his biggest fans are closer to home, his grandchildren Raegan and Jaxson.

“My two grandchildren love it. This is their favorite room,” he says of this room overflowing with dummies.

“My wife Roenia has always been a part of this. She’s my secretary, runs the music, and hooks up the sound and is my roadie. It’s just me and her and the dummies,” he says about his act, David Turner and Friends.

“My philosophy is if you can make ’em laugh, they’ll listen,” said the ventriloquist. “What makes me feel good is when after I’m finished, someone comes up and says, ‘Hey, ya’ll done good.’”