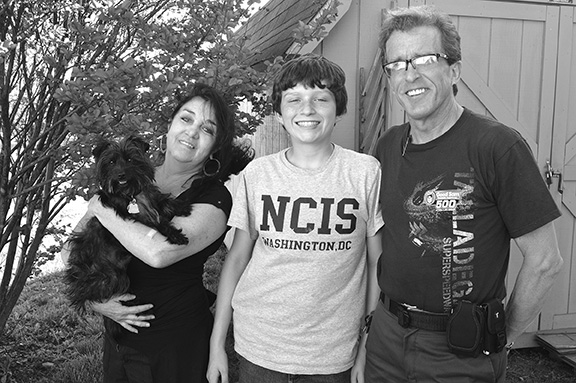 It started as a paid gig.

Twenty-four years later, his job had evolved into a ministry, as security man Clancy Fraser helped protect the life and private business affairs of Glen Campbell as Alzheimer's snuffed out the famous entertainer's performing light.

During that time, Clancy evolved into Glen's and wife Kim's inner-circle of trust, as Alzheimer's dimmed the super star's ability to care for himself and eventually ended the entertainers' professional performances.

During the entertainer's last performing years, Clancy confirmed the hardest part was protecting the performing icon from the media, especially the paparazzi.

"The paparazzi are vultures, ruthless and heartless," Clancy accounted. "We didn't trust a lot of news media, but it's the paparazzi who can be most brutal. We had to be on constant vigil to keep Glen from wandering and becoming a helpless victim of the paparazzi-types."

As the disease took away more abilities from the internationally-acclaimed singer, song-writer, musician and sometime actor, dangers and drama were constant.

"It became a 24-hour vigil, with dangers lurking everywhere potentially, including protecting Glen from himself," Clancy described. "Sometimes, Glen would fall ... both of his eyes would be bruised with dark rings. Danger was always present, for example, like the day Glen stuck a knife into an electrical outlet. It was one catastrophe after another ... waiting to happen!

"And the vultures never seemed to let up, always snooping for something to put in the media ... sometimes, they'd actually steal out of our travel duffel bags, hunting items to put on eBay," Clancy added.

Initially, there were subtle symptoms: "Unusual things happened at first, such as Glen placing his car keys in the refrigerator for safe keeping. Eventually, we all, including loyal staff people, became caretakers for Glen around the clock."

Clancy described the sadness of experiencing the star's diminishing years of public performances.
"It was an evolution of sadness, as we witnessed Glen's super sharp, bear-trap- quick mind begin to fade away," Clancy accounted. "You've got to understand, this was a brilliant, gifted man, so gifted that he helped careers of other super stars, including Frank Sinatra and Elvis Presley."
The performer was described as a delight to work with, especially the years before the Alzheimer disease began robbing Campbell of his talents and memory.

"Other entertainers enjoyed working with Glen, because he was always gracious and understanding when mistakes happened, whether it was on stage or in private," Clancy described. "But, it was magic when Glen stepped on stage ... the relationship he had with audiences."
Magic was especially evident on the super star's "Goodbye Tour" in 2011 which was extended multiple dates because of sold out venues and fans clamoring for more.

"The fans were forgiving on that last historic tour and seemed to understand why Glen might make a mistake or forget a lyric," Clancy noted. "In 2011, Glen was still functioning at a high personal and professional level."

However, there was concern about the tour: "We didn't know if people would want to come and see someone with Alzheimer. We knew there was going to be some mistakes. But from the first steps out on stage opening the tour, the fans responded with repeated standing ovations all across the nation. And we were sold out, everywhere we went ... due to that, the Goodbye Tour was extended, for Glen was obviously enjoying and benefiting from the fans' affection."

Clancy credits Kim Woollen, Campbell's wife of 32 years, with heroically standing by her man.
"When Glen's children made the move from Malibu, to Nashville, in pursuit of their own music careers, Kim made the brave decision that it would be best for Glen that they also move to Tennessee," Clancy shared.

Clancy's described the exhaustion he felt when his full-time professional and personal relationship ended after Mr. Campbell was put in a care facility.
"It ended for me in December 2012," Clancy detailed. "I was exhausted ... completely drained. I went home to Florida ... and mostly slept for three whole months. I love Kim and Glen, but the continuous dangers and drama completely drained my soul. We were locked in one crisis after another."
How did a boy from Paducah, Ky., end up knowing and working with stars and near-stars throughout America?

Music didn't lead to the 56-year-old's career in security, although Clancy's father performed in multiple, famous gospel music groups in the 1950s and 1960s.

"While in the military as a young man, I became involved in security as a medic in Washington D.C., including the Presidential detail," Clancy stepped back in time. "Later, I was in charge of security for newspaper legend Al Neuharth," the founder of USA Today, the Freedom Forum and its Newseum."

"At that time, I helped protect the security of Mr. Neuharth's three adopted children," Clancy confirmed.
When Mr. Neuharth died in 2013 at age 89, he had adopted eight children.

After Washington and other security duties in the northeast, Clancy moved his security talents to Tennessee and Mississippi where he developed a bus service for entertainers and celebrities. He currently drives and helps with security of country singer Marty Stuart.