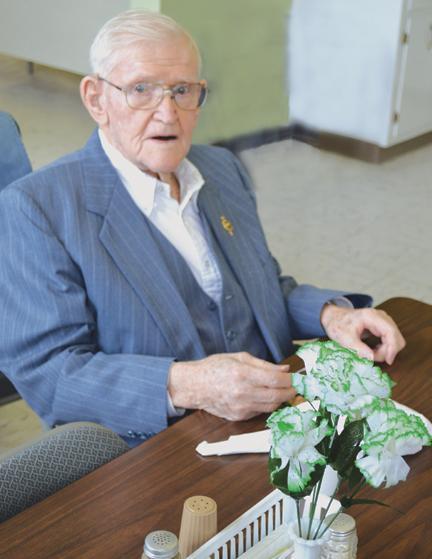 March 20, 2014, is going down as a historic date in Middle Tennessee history.

That's the date a former mayor of Woodbury will turn 100 years old.

"As far as it can be determined, Nolan 'Dude' Northcutt is the only former Woodbury mayor to celebrate 100 years of life, and most of it has been as a public servant to our community," noted present-day Woodbury Mayor Harold Patrick.

"No other former county executive, except Mr. Dude Northcutt, has lived to be 100 years old, that we know of," confirmed present-day Cannon County Executive Mike Gannon. "He's the best example of a public servant that I can find…our young people would do well to look at this gentleman who has served his community residents most of his days."

And it's the date the community's oldest living former businessman, former school board member and former chief of the Woodbury Volunteer Fire Department marks his 100th birthday.

Meet versatile Nolan "Dude" Northcutt, a historic public figure and unique community leader who will likely drive himself to the Arts Center of Cannon County on March 22, the date and place his daughters, Ann McBride, Woodbury City Councilwoman Faye Northcutt Knox and son, attorney Richard A. Northcutt, have planned a community-wide celebration of the state's newest 100-year-old celebrant.

The writer of this account had to chase Mr. Northcutt down in his vintage Honda vehicle, the car he drives weekdays from his Woodbury residence for lunch at the Cannon County Senior Citizen Center where his neighbors are sharing celebrity "Dude Facts" throughout the month of March.

"We're celebrating 'Dude Facts' of the day, by long-time friends who meet and eat daily with our celebrity," verified Senior Center Director Connie Rigsby. "Today's 'Dude Fact' involves my husband, Greg, who served as one of Mr. Dude's campaign managers when he first ran for Cannon County Executive in 1982. If you remember seeing Mr. Northcutt's political signs in some weird and out-of-the-way scary places, it's because my husband was only 16 years old at the time."

State political leaders down through the decades have come to Woodbury to pay respect to Mr. Northcutt, including current Tennessee Gov. Bill Haslam.

"I've known several governors, but Gov. Haslam will probably be the last governor I know personally. I served as a campaign leader for Frank Clement, back when our community's legendary (the late) Jim Cummings served as Cannon County's state representative, and ultimately as secretary of state," Mr. Northcutt recalled. "And we delivered the county for Governor Clement too, by a solid margin."

He noted that former governors Phil Bredesen and Lamar Alexander also paid "respect calls" to him as the county's former executive and Woodbury's mayor.

The birthday celebrant could hardly eat his recent Senior Center meal due to the friends, mostly ladies, coming by to "show respect" and/or "hug him up real good."

"I've known Dude since 1973, one of the best men of our community," added "Amazing" Grace Young.

"I'll think a while for something positive to say about Dude," added Grace's husband, Nile Young, a county judicial commissioner. "Oh, it took me a while, but here it is: Dude Northcutt is one of the best friends and examples of good neighbor and citizenship our community has to offer."

"Dude is one of my best buddies," confirmed Forrest Pitcock at age 83.

"I've known Mr. Dude Northcutt since 1966, we've gone to the Woodbury Church of Christ all these years," added Betty Melton.

One senior woman recalled Mr. Northcutt's era as a businessman when he operated the Sudden Service Station for many years prior to becoming an elected official.

"I recall walking from 'The Bottoms' to get kerosene from Mr. Dude Northcutt there at his service station," chronicled lifetime resident Brenda Odom. "It was located where the big drug store sits today."

From candles, to kerosene lamps to first flickering electric lights to another century has been Mr. Northcutt's journey from 1914 to 2014.

"Being 2014, it's been almost a century now since electricity was brought into Woodbury," noted Mr. Northcutt.

He chronicled other milestone moments of his storied life:

"I've seen a lot, but the biggest change that touched virtually every citizen, and every business, was the arrival of electricity back in 1925," shared the man as his memory flickered agilely back to another century. "The electricity came from a generator down at Frank Hoover's Mill, located about two miles southeast of Woodbury city limits.

"There was no bigger step of progress for our town than the arrival of electricity," Mr. Northcutt noted. "I recall seeing the first power lines and poles being erected up and down the town's streets."

"I also recall that at 9 o'clock sharp each night, when our new electric lights would blink off and on three times, you best be prepared to go to bed, for that was when the electrical power was cut off from the generator down at Hoover's Mill," Mr. Northcutt said.

The "telephone" was another huge progressive step for mankind, Mr. Northcutt noted.

"Our first phones were on party lines with four or more families, and that was before we had telephone 'numbers'," Mr. Northcutt added. "We would pick up the phone, crank for the operator, and she would tell us whether or not the party we were calling was at a home or not."

He and Mayor Patrick recall thousands of jobs at the now dormant garment industry when Woodbury was jokingly known as a "go get her" community.

"That's when the men folk would pull up to the garment factories, to pick up their wives after a day's work," confirmed Mayor Patrick. "Since many of the ladies didn't drive, the men would pick them up, and became known as 'go get hers'."

Mr. Northcutt is noted "as a self-made successful man," rising from being an orphan, after losing his father, Lee Northcutt, to "lint lung disease" from working in cotton gins down in Alabama.

"And when Mother (Angie Jennings Northcutt) died in the 1918 influenza outbreak, I was brought to live in Woodbury at age 12," he shared. "I grew up in the home of S.M. Jennings, who had the Jennings Motor Company dealership. They helped raise me in a good home after I lost both parents."

S.M. Jennings was a brother to Mr. Northcutt's mother.

"My mother was the one who gave me the nickname of 'Dude'," he recalls. "She'd refer to me as 'my Little Dude.'"
A slick-looking vintage automobile also helped confirm the nickname in his adopted town of Woodbury, Mr. Northcutt recalled.

"I drove a 1925 Ford coupe for a long time as a boy around Woodbury, that had a spare tire mounted on the back," Mr. Northcutt's memory motored nimbly back through time. "I also got the nickname "Dude" in that era, when on the back tire, I had 'the Mayflower" painted on as a sign. I guess that helped get me the nickname of 'Dude' too."

In his early twenties, he became one of Woodbury's youngest business owners.

"I was trying to buy the 'Sudden Service Station' formerly owned by Sam Blanks and Jimmy Roberts," Mr. Northcutt detailed. "Because I was so young, the owner wanted someone older to go on the $1,000 note (purchase price) with me. I'll never forget Mr. John Boyle Gribble, who signed for half of the note.

"We opened Northcutt & Gribble Service Station in January, 1937, where Rite Aid Drugs now stands … by May, I paid the $500 off to John Boyle Gribble," he accounted. "Within a year, I was able to pay Hoyt Bryson off for the loan he'd made to me for my part of the $500."
Mr. Northcutt married "childhood sweetheart" Annie Lefever in 1934.
"I only got a fifth grade education. But Annie and I had been sweet hearts since we were about 14 or 15…she was a good basketball player at old Central High School, and I went to all her games.

"We eloped when we were both age 20," Mr. Northcutt recalled. "We slipped off to Franklin, Ky., where we tied the knot. We drove our 1929 Chevrolet to get married across the state line, where we had a mint julep in celebration of our marriage."

At age 100, Mr. Northcutt still mows his own lawn and drives himself to Woodbury Lions Club meetings.
"I've been in the Lion's Club for 68 years," the civic-minded man verified.

From being orphaned as a boy, Mr. Northcutt ascended to his community's loftiest elected offices.

"Dude Northcutt is a true community servant, having served so long in the Lions Club," noted Patrick. "He was also elected as the mayor of Woodbury, to the Cannon County School Board and was elected Cannon County Executive. He's the consummate community-spirited man, dedicated to his family, his church, his Lions Club. No man has been more important to Woodbury than Dude Northcutt."

Ironically, it was Patrick who defeated Mr. Northcutt as county executive in 1986.

"Harold Patrick retired me from public office," he shared with a wry smile.

"We were friends then, but are the closest of friends now," Mayor Patrick noted. "We go have breakfast each Sunday morning down at Hardee's where we all catch up on what's going on in our community."

Mayor Patrick also praised Mr. Northcutt for his "volunteer" work with young baseball players in the 1940s-50s.
"Dude Northcutt voluntarily managed Woodbury's town team when I recall hotly-contested games between communities, such as Readyville, Lascassas and Auburntown," Patrick noted. "He put in a lot of hours, taking time away from his own family."

Mr. Northcutt was honored with the Century Award, being the oldest in attendance at last year's Rutherford County Old Timers' Baseball Hall of Fame gathering at Cannonsburgh in Murfreesboro.