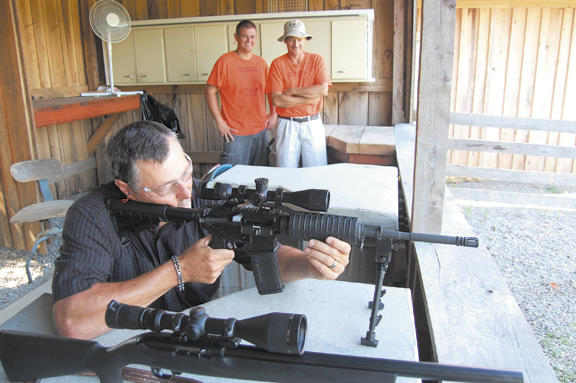 KEN BECK photos At the OK Corral rifle range Nick and Grady Parker observe Murfrees-boro's Steve Agostino as he squeezes off his Buckmaster AR-15. Agostino enjoys practicing his marksmanship at the OK Corral Shooting Range because of the atmosphere.

By KEN BECK The Cannon Courier

Up along Pleasant Ridge, gunfire echoes daily across the hills and hollows making sweet music to the ears of Grady and Nick Parker.

The father and son are partners in the OK Corral Shooting Range, a business that began in 2009 and now draws 300 to 400 shooters a week.

Their clients range from competitive marksmen and those certifying for concealed-carry handgun permits to recreational shooters and trap shooters.

"At a lot of shooting ranges you can shoot a pistol but not a shotgun. A lot of places you can shoot shotguns but no rifles. This place allows you to do it all and makes us more attractive for shooters," says Grady, 57.

"For 20 years I rode the tractor on these hills sliding to the bottom. I'd go back up and slide back to the bottom. I had to figure a way to make a living rather than riding the slippery hills. I just knew the interest in shooting was here and the places to shoot were very limited."

It seems as if his idea was right on the target as folks motor in from miles around.

"I think it must be the price of $5 for the whole day," he says as a key reason for its success.

"I didn't really know how it would take," said Nick, 29. "I didn't think people would come out here but I got to eat my words."

Grady and Nick, whose main business is Home Sweet Home Improvements, created the five-acre shooting range themselves, carving out seven pistol ranges from hillside embankments with a bulldozer. In 2010 they added a rifle range, followed in 2011 with a trap-shooting range (featuring five station trap machines that can be voice activated or activated manually) and an assault rifle and shotgun pit.

The facades of the rifle and pistol ranges wear an old-Western look as they and the clubhouse behind the trap range were built from timber that the Parkers' cleared from their 300-acre property.

The facility took its name one day when Grady told Nick, "Let's go shoot at the OK Corral," and the name stuck. They have since named their dog Doc Holliday.

A recent weekday morning found Steve Agostino of Murfreesboro practicing at the rifle range with his Buckmaster AR-15. There were plenty of targets in front of him at the 50-, 100- and 200-yard marks.

"I usually come with my son two to three times a month," said Agostino. "I like this place because of the atmosphere, being out here in the country and the Parkers. And as a gun owner, we have a responsibility to be proficient."

Meanwhile, over at the pistol range, Carl Berlin and Julie Dyer of Murfreesboro stand back 20 yards and take turns shooting a Smith & Wesson M&P45 at targets as well as a pumpkin and watermelon.

"I like the quietness and, the variety of ranges and you don't have someone hovering over your back," said Berlin, who generally brings something biodegradable to shoot at for fun.

At the one of the pistol ranges, Justin Cooper of Murfreesboro, a member of the International Defense Pistol Association (I.D.P.A.), hones his skills.

"The I.D.P.A. is shoot-what-you-carry competition. I come here almost every weekend when I'm not in a tournament," said Cooper. "It's what keeps me broke, but I can shoot all day for five bucks."

"The bulk of our business is concealed-carry permit students," said Grady. "We have 14 instructors who use the range for classes. I knew we were going to do well when I built the classrooms to accommodate 10 to 15 students, and the classes were enrolling 50 [students] before I had finished."

The Parkers have had clientele ranging in age from 10 to 78 and from such countries as Ireland, Sweden, Germany, Canada and Australia, and after a regular customer died in a vehicle accident two years ago, he was cremated and his ashes were sprinkled here on the rifle range.

For the first two years of the shooting range, the place ran itself on the honor system as customers paid by putting their money in a little black box. Since 2010, there have been personnel on the property. Today Grady's sister and brother-in-law Wanda and Richard Smith manage the facility.

No stranger to hard labor, Grady was born in Murfreesboro, the eleventh of 15 children. His family farmed there until his father sold the place to the city in 1962, which has since become the site of Old Fort Parkway.

The family moved to a farm in the Kittrell community where they milked 250 dairy cattle and butchered a couple of cows, 10 hogs and 500 chickens a year. After Kittrell High School was closed, Grady went on to graduate at Riverdale High in 1974, which also became Nick's alma mater.

Grady moved to the Woodbury area in 1993 when he wed Barbara Nichols, director of Cannon County schools. Their daughter Ashley is a senior at Cannon County High. Nick has three children: Braxton, 9, Brennon, 7, and Brooklyn, 5, who attend Woodland Elementary.

The Parkers also operate a facility called The Corner, which is available for weddings, anniversaries and other festive events. On the second Saturday night of each month, they host a birthday bash with a potluck dinner and homegrown music, and everybody is welcome.

As for their likes on the range, Nick says, "I love shooting traps. It's you against the bird. There's not a lot of outside variables;" whereas Grady confesses that he doesn't shoot a lot, but says, "I like to see people shoot."

"One day I'm hoping Cannon County High School will have a trap team. Most surrounding counties schools have a trap team," said Grady, who may have a lead on the perfect place for a Lions squad to practice as well as compete.

Directions: From Highway 70 (Main Street) a block west of the Woodbury town square, turn north on Doolittle Road and go about 3 miles to three-way stop sign; turn right and go about one-quarter of a mile.