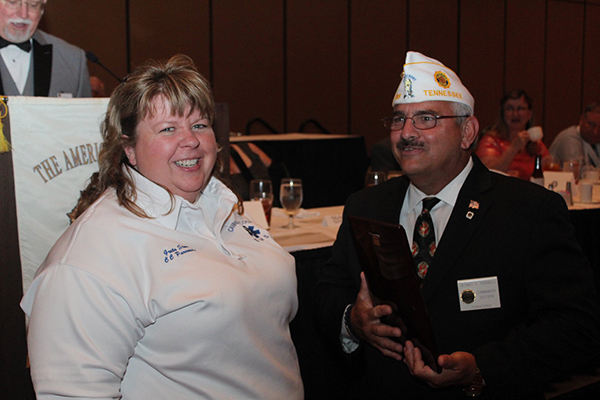 The Hilton Stone, American Legion Post 279 is proud to announce that their candidate, Greta K. Parsley Stone, has received the State of Tennessee American Legion Emergency Medical Technician (EMT) award of the year 2017-2018. Greta was nominated by Vice Commander, Christine Williams Barrett. It is noteworthy, that this is the first time the Department of Tennessee EMT of the Year award has been presented. Greta is a Critical Care Paramedic for Cannon County. She is the daughter of Jerry and Julie Parsley of Short Mountain Community and a devoted wife to her husband of 26 years, Butch Stone, and mother to their five children, Tyler, Sean, Tabitha, Jacob, and Will Stone.

Greta became a full-time employee at Cannon County EMS in April of 2013 as an EMT-IV, continuing her education in 2014 to the Paramedic level advancing in Critical Care Paramedic level in December 2016. Since completing the paramedic program at Tennessee Tech in 2014, Greta has continued her education and graduated from Motlow College with a degree in Business Administration. She has also completed the steps in becoming Paramedic Instructor Coordinator for Cannon County, DeKalb County, and with the State of Tennessee.

Greta received the 2016 for EMS Call of the Year by the Upper Cumberland Directors Association and in 2017 the recipient of the Pediatric Call of the Year awarded by Life Force Air Medical Erlanger. She has also been awarded the Outstanding EMT of the Year for Cannon County in 2017 by the Hilton Stone American Legion Post 279.

As a Critical Care Paramedic, Greta has the desire to continue learning daily to provide the best possible pre-hospital care for every person of Cannon County.

American Legion, Hilton Stone Post 279, Woodbury TN is honored to endorse the recommendation of Critical Care Paramedic, Greta K. Stone for the Department of Tennessee's Emergency Medical Technician of the Year. Mrs. Stone's service to two communities, in Cannon County and DeKalb County, is truly amazing. Her willingness to go above and beyond the position requirements, is indicated by her thirst for knowledge and above all, her love of and care for her communities.

Furthering her knowledge, in an ever-changing career field, exemplifies the qualities it takes to be a true professional. Mrs. Stone became a full-time employee with the Cannon County Emergency Medical Services in April 2012. She performed her duties as an EMT-IV, and continued furthering her education as follows:

• Going back to Tennessee Technical University she took the Tennessee Paramedic courses, completing in August of 2014.

• By December of 2016 she completed her studies from Cookeville Regional Hospital, becoming a Critical Care Paramedic.

Mrs. Stone became a Vanderbilt Life Flight Ambassador for Cannon County for 2015. She also serves as a Medical Investigator for Cannon and DeKalb Counties.

As a Critical Care Paramedic Mrs. Stone has the desire to continue learning daily to provide the best possible pre-hospital care for every person of Cannon County. As one supervisor stated, "Need's to be more like Greta in the medical field of her profession."

Mrs. Stone goes out on many calls during her duty shift. day or night, as the case may be. She tends to the emergency medical needs of all who require her assistance. Whether it be a vehicle accident, farming or ranching incident, medical emergencies at home, or the transport of patients from nursing home or long-term health care facilities, to medical facilities for treatment or other incidents, she is always prepared.

"Fire investigators are working to figure out why a mobile home caught fire in Smithville on Sunday afternoon (December 4, 2016). According to the grandmother of the victims, her grandson, and his fiancée, were killed in the fire. Her great-grandson, who was four years old, later passed away at Vanderbilt University Medical Center. The grandmother stated that a driver pulled over to help, pulling a two-year old boy from the burning trailer. Her granddaughter, mother of the four-year old was also saved from the burning trailer. Firemen from both Smithville and DeKalb County responded to the call. They had to tear out the siding of the mobile home to get to the fire. According to firefighters, the mobile home, located on Short Mountain Highway, caught fire around 1 pm. Emergency personnel, on the scene, treated and transported survivors to Vanderbilt University Medical Center. The grandmother stated that it was heartbreaking to learn, from hospital personnel, that that they had lost their four-year old, great-grandson also. Mrs. Stone was instrumental in treating the burn victims, ensuring prompt transport to Vanderbilt."

Another instance of calls Mrs. Stone was involved in, happened shortly after the above incident. Starting off the new year, she and her partner encountered a totally different scenario. Here is her story:

"Dispatched in January 2017 to male patient sitting in vehicle and a female patient in bed and is bleeding. Responding, not knowing what exactly we were responding to, Mrs. Stone and her partner Jason stage a safe distance from residence and requested for Law Enforcement to come to scene to make sure of scene safety before entering the area. After scene cleared by law enforcement, we find a male patient sitting in vehicle with multiple gunshots wounds. Patient pronounce dead by CCEMT-P Stone, who is one of Cannon County's medical investigators. Entering the home, unsure of the condition of the female patient, we witness bloody foot prints through the house, and blood on the doors. Pushing the bedroom door open, we find a female patient covered in blood, lying on bed. Patient with multiple deep lacerations to arms, hands, feet and legs, an approximate 10-inch deep laceration to the back of the neck, stab wound to the eye, and gunshot wound to lower abdomen. Patient still responsive and becomes combative trying to fight for her life. Blood led to another door in the bedroom, when Stone pushed door open she found another female patient lying in a pool of blood on the floor, still breathing with gunshot wound to the head. Both females were packaged, with EMS trying to contain any further blood loss and were moved to the ambulance. In fear of their safety, unknowing where the perpetrator was located, Mrs. Stone and her partner worked quickly to save both female lives. Extra EMS crew requested due to the severity of the injuries. The patient with the gunshot wound to the head was released to the extra paramedic crew that arrived on the scene. All medical efforts were given within my scope of practice as a paramedic, to save our patient's life and was transported emergency traffic to the closest facility to handle such trauma victims. Glad to say the patient was eventually released from a Level 1 trauma center after a total of 31 surgeries and is able to continue life with her family."

For our small community, instances such as this are a rarity. Needless to say, Mrs. Stone was able to perform her duties in a totally outstanding manner. See attached Nashville, Tennessee WKRN, Channel 2 news release/interview with the survivor's story.

Mrs. Stone has received numerous regional and state awards or recognition, besides being elected to the Who's Who Among Students in American Universities and Colleges. She was recognized as a Phi Theta Kappa Graduate. Both these awards are through her studies at Motlow State Community College.

Mrs. Stone received the EMS Call of the Year for 2016 by the Upper Cumberland Directors Association for outstanding performance and service to her community.

In 2017 Mrs. Stone received the Erlanger Call of the Year, awarded by Life Force Air Medical Erlanger, part of the Erlanger Health System in Chattanooga, Tennessee for her outstanding care of her young patients.

During the Annual Patriot Day Memorial Ceremony, September 11, 2017, at Cannon County High School, Mrs. Stone was presented the Cannon County Outstanding Paramedic of 2017 from American Legion, Hilton Stone Post 279. We found that Mrs. Stone is highly respected by her community and her peers.

Mrs. Stone is the daughter of Jerry and Julie Parsley of the Short Mountain Community of Cannon County. She is the devoted wife of 26 years to her husband Butch Stone. They have 5 children, Tyler, Sean, Jacob, Tabitha and Will. Her oldest son, Tyler, is following in his mother's footsteps. He has become a certified EMT/ Paramedic, with the goal of becoming a qualified Emergency Room Surgeon. She is definitely a role model for all.

In her spare time, she supports her husband and son Tyler, in their duties with the Sons of the American Legion, Squadron 279.