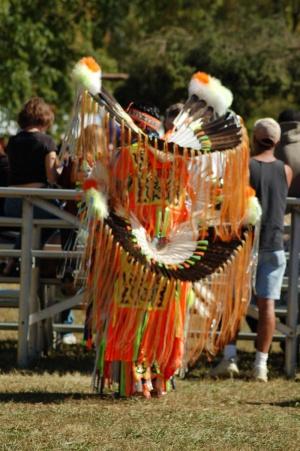 Has the “Great Spirit” led Native Americans to hold their Pow Wow along the “sacred Trail of Tears” that winds through Long Hunter State Park and straddles the border of Davidson and Rutherford counties?

There are those Native Americans who feel “on holy ground” when the Nashville-based Native American Indian Association stage this, their (32nd annual) Pow Wow (Oct. 18, 19, 20) along the infamous “Trail of Tears” where thousands of mostly Cherokee and Choctaw people perished on a forced march in the cold winter of 1838-39 as part of President Andrew Jackson’s Indian removal policy from Tennessee and other Southeast states.

The route of the Trail of Tears goes through Long Hunter State Park.

“We certainly feel the presence of the Holy Spirit each October,” confirmed 70-year-old Sally Wells, a Choctaw tribal leader who lives in Smyrna. “And yes, the Trail of Tears where so many of our people died is considered very sacred grounds here at Long Hunter State Park. We feel the Holy Spirit leads us to have our Pow Wow here each year when more than 50 tribes come from throughout the U.S. and Canada. It’s grown into the largest Pow Wow in the Southeast, and serves as a fund-raiser to help us build a Native American cultural worship center and headquarters in Nashville.”

Is it coincidence that President Jackson’s old home is located less than 20 miles, by way the crows fly, from Long Hunter State Park?

Some Native Americans feel strong emotions against Jackson, to the point they refuse to deal in $20-dollar bills that has his likeness!

Internationally-acclaimed flutist/violinist Arvel Bird acknowledged the Great Spirit and other spirits’ presence at last year’s Pow Wow that attracted more than 12,000 tourists to the park.

“America’s last free Indian, Geronimo, is here, floating in the wind, over Middle Tennessee that was pierced and stained with the blood of thousands on the Trail of Tears,” noted the Nashville-based song-Bird, a member of the Paiute tribe located in the western U.S.

“We sing to the warriors of our past, and to their mothers’ cries, saddened by their loss,” Bird acknowledged. “And we sing to the loss of 500 Native American tribes/nations in the U.S.”

“Arvel is paid big money to perform around the globe, but he comes each year, an unpaid volunteer to perform on the holy grounds here at Long Hunter State Park,” clarified Wells.

Wells was asked about other “spirits” that Native Americans experience.

“We don’t often speak of them, but we are very spiritual people, and we pay attention to when our ancestors reach out to us,” Wells added. “We don’t encourage others to seek out the spirits … we let the spirits come to us.”

“She saw a white vapor, but her fiance’ saw the spirits’ form and face,” the mother noted. “In the past, when a member of our family saw a spirit, we had two cousins die within days of one another.”

Christy described her recent paranormal encounter that occurred near the Stones River National Battlefield’s Cemetery and infamous “Hells Acre” where one of the Civil War’s bloodiest battles was fought.

“Our mother and grandmother are very spiritual, and have reared us to never seek out a spirit,” Christy began. “But, on a recent Sunday night, when my fiance’ was at his automotive business across the tracks from the Battlefield (in Murfreesboro), I initially saw a white form, like a vapor in the RV while I was waiting on my fiance’ to finish his rounds checking on his stored vehicles.

“I heard a noise, outside the RV, like something rattling the door latch, when I looked up and witnessed the white vapor inside the RV,” Christy continued. “In the meantime, my fiance’ went to check on his vehicles, in case someone was trying to steal a radio or another part of one of his stored vehicles. When he came back in the RV, I could see he was very upset and nervous … finally, I said, ‘You’ve seen a ghost, haven’t you?’

“His visual was clear, as in an actual form, where mine was a white vapor shadow,” Christy described. “But my vapor disappeared, having said nothing. However, he saw a little boy, wearing a night gown that was the fashion back in the Civil War-era. He said the child was acting playful, darting in and out of the cars, as if to be mischievous. He noted that he actually saw the face of the little boy.”

“Earlier, we’d walked across the railroad tracks, to the Battlefield,” Christy added. “It was a hot sunny summer day, when suddenly, I felt very cold air … so cold, it made me shiver, freezing my butt off, that’s how cold it felt to us. That’s in the part of the park where they found more than 100 soldiers’ bodies who fell during the Battle of Stones River.”

What do Native Americans believe regarding “spirits”?

“There’s times when a spirit is telling us goodbye,” Christy advised.

“We checked with leaders of our tribe,” Christy added. “Wondering what we saw meant … they didn’t think it too relevant since I never looked the spirit eye-to-eye.”