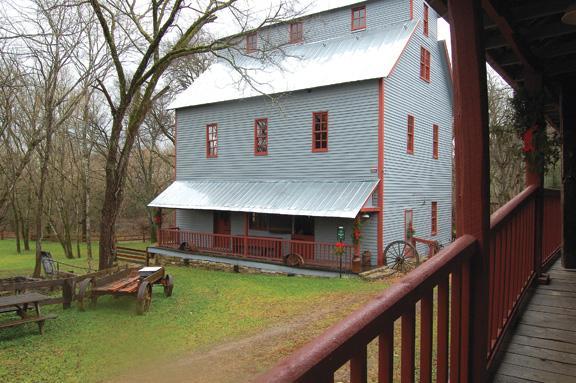 The Fords, who live in the historic 1829 Readyville brick mansion known as The Corners, operate Good Gracious Café and Catering in Murfreesboro, which they will move to the mill.

They plan to open in the mill March 13 and increase the hours of operation.

"We're leaving Murfreesboro. We're heading to Readyville," said Karen. We will be Goodness Gracious at the Mill.

"We're planning to carry on the Saturday morning pancake breakfast tradition. We are expanding breakfast and lunch to Thursdays and Fridays and will have breakfast, lunch and dinner on Saturdays. As we grow we'll increase our hours, but it will still be the venue for private parties and weddings."

Brady, who purchased the mill in March 2006, spent thousands of hours restoring the four-story mill and its outlying buildings on the East Fork of Stone River. He opened it for Saturday morning pancake breakfasts and for weddings and private parties three years ago.

Of his decision to sell, Brady said, "I think more than anything I just wasn't cut out for the restaurant business and was ready for somebody else to take the reins. It outgrew me.

"I feel really good about it. They're gonna be open three days a week so it will good for the community and good for the mill."

The Fords moved into their house, also on the bank of the Stone River, in March 2012, and have already been operating The Corners on the River from their home and grounds for weddings, receptions, outdoor events and private parties.

"Tomm has told me several times he wanted to sell it. We were busy doing what we do in Murfreesboro. Finally this last time he said, 'I'm selling it.' We fell in love with Readyville and decided that is what we needed to do," Karen said of relocating their restaurant and catering business to the mill.

The Fords' three grown children are also part of the business.

"My oldest daughter Danielle Worrell manages the house operation and organizes things and does the bookkeeping. Our son Eric Ford is the chef and also the miller. Tomm has taught him quite a bit. And my daughter Natalie Hughes also will be helping," said Karen.

Tentative hours of Goodness Gracious at the Mill will be 8 a.m.-2 p.m. Thursdays and 8 a.m.-8 p.m. Fridays and Saturdays.

"This can be a family tradition and can be handed down, and we are excited about being a part of it," Karen said. "Tomm has really done some amazing things and we have big shoes to fill."
Noted Brady of his mission in preserving the mill, "I had a great time, and if well-taken care of, it will be there for m