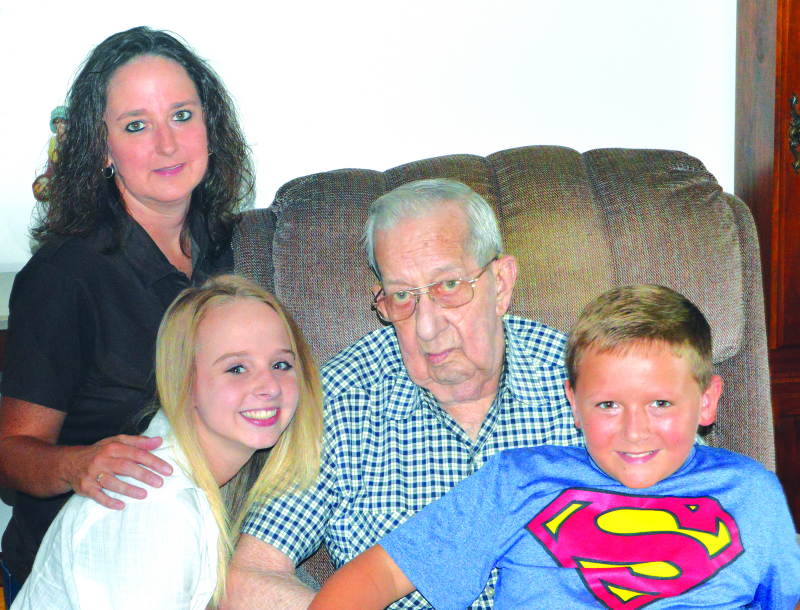 Roger Whitlock, owner of Hi-Way 53 Market, is surrounded by daughter Denise Whitlock Duke, now a co-owner and store manager, and her daughter, Konner, 16, and son Kolby, 11.

Well-crafted Cannon County rocking chairs helped motivate a Florida man to move his family and start a new business near Tennessee's Cumberland Mountain foothills back in 1978.

Roger Whitlock credits that 850-mile move to "friendship" with (the late) Mayne Mooneyham and wife, Dorothy, who prior to moving to the Iconium Road area of Cannon County themselves, lived near Mr. Whitlock and his wife, Janet, in Ft. Lauderdale, Florida. It was the Mooneyhams who introduced Mr. & Mrs. Whitlock to Cannon County and local wood-crafting artisans who live here. Long-time Woodbury residents may remember Mr. Mooneyham as a barber at the former "Billy Womack Barber Shop", which was known as much for music back then, as it was for shaves and haircuts.

Ultimately though, it was those local wood-crafting artisans and their sturdy-built rocking chairs and swings that influenced Roger and Janet Whitlock to begin making regularly scheduled trips all the way from Ft. Lauderdale to rural Cannon County, where they would purchase loads and loads of them to merchandise back in Florida during the mid- and early-1970s. "We made semi-annual trips to Woodbury, hauling back just as many rocking chairs and swings as we could, in order to sell them at our local weekend flea market back home" Mr. Whitlock said, as he unlocked details of his family's past.

Over time, the idea of rearing their young daughter (Denise, born in 1974 in Ft. Lauderdale) in a more rural setting began to develop, ultimately becoming the deciding factor in Roger & Janet's decision to move to Cannon County permanently. "Having been born in a small town near Roanoke back in Virginia, I wanted to transition my family back to small town life," Mr. Whitlock says.

But, don't let the "rocking chairs and swings" fool you, for once the decision was made, this former Ft. Lauderdale construction engineer and flea market vendor suddenly transformed from a familiar and comfortable way of life to a multi-tasking country store owner and service station operator following his and Janet's purchase of the "Hi-Way 53 Market" (then called "Estes & Jones") from Ricky and Bonnie Estes, and Lynn and Wanda Jones. And, by the way, a tidbit and little-known fact is that when Mr. & Mrs. Whitlock re-located and purchased the store way back then, neither of them had any experience in the convenience store business whatsoever! They had just realized where they wanted to be, how they wanted to raise their young daughter, and were hard-working, determined, and faithful enough to make it happen.

"We initially lived in a single-wide mobile home behind the store here," Roger says. Then, as the years passed and their new business began to grow, he and Janet also acquired adjacent property where a service station had formerly been operated by Les Bush. "We needed to increase parking convenience for customers, and provide future expansion options for the store and the community," he added.

In the 1980s, Mr. Whitlock became even more visible locally after contracting to become a Cannon County school bus driver. He had been operating the service station next door to the market (which he had re-built) in that era as well, up until his wife Janet had a stroke in the fall of 1989. "Not long after, we decided to close the service station," accounted Mr. Whitlock, who, at the same time, was also busy constructing a new home for the family not far from the market. Ultimately, the following circumstances surrounding Mrs. Whitlock's health were what led to that decision. They just felt it best for the family, and for their primary market operations at the time.

In recent years, Mr. Whitlock has gradually started passing daily store operations to his daughter, Denise Whitlock Duke, now a co-owner and store manager. In addition to managing the store 365 days of the year, Denise took over her father's school bus route in the late 1990s. She's also the busy mother of daughter, Konner, 16, and son Kolby, 11, both of whom help in the family store just as Denise did when she was growing up.

How devoted to the store are Whitlock family members? "The day of my Mother's funeral in January, 2004, has been the only day the store has been closed during the past 20 years," recounted Denise. Having grown up in the market undoubtedly brings about a lot of warm memories for her.

"At age 10, I stood on a wooden soft-drink crate to operate the cash register," Denise recalled, thinking back across the decades. "Dad didn't think it was particularly good for business for customers to see a small girl making change for them. But, when Dad was out of the store, my mom would let me...Sorry dad!!!... I guess that secret's out now isn't it?!?!" She smiles and laughs quietly, thinking about that special "secret"; a memory that has been shared only between her and her Mother for a very long time.

During her younger years, Denise attended nearby Woodland Elementary School before graduating in 1992 from Cannon County High School where she was active in softball and basketball. Furthering her education, she graduated from MTSU in 1996 with a degree in business management.
The Whitlock family presence has not just been in running a business. They always have been, and remain devoted to many area community events to this day; largely due to the relationships Denise developed while growing up here. "We're involved in sponsoring community sporting events," says Denise. "I also coach area youth sports teams and, I've served as the PTW treasurer at Woodland School for the past 10-plus years."

Like father, like daughter, like grandchildren ... Konner, the oldest, has been physically "raised" in the store and has become a great employee. Son Kolby, has since surfaced as a 'store rat' as well, helping with mowing and other tasks around the premises. Roger and Denise are both extremely proud of both children.

Store hours are 6 a.m. to 8 p.m. Monday through Friday. Employees get to sleep in a bit on Saturdays and Sundays, when the store is opened an hour later at 7 a.m.

"Six a.m. weekdays, and that is EVERY weekday, is when local retired builder Jerry Smithson places his breakfast order of chicken and biscuit, with a slice of tomato," confirmed a store employee. Many other local residents, just too many to mention, are also loyal customers relying on the market for its numerous services on a daily basis.

To say the store's business has expanded through the decades would be an understatement. It has grown from 3-4 employees in the early years, to 11 employees presently, counting Kolby and Konner. "When I took over the store back in 1978, we sold from 10 to 15 copies of the Cannon Courier each week," Mr. Whitlock itemized. "And today, we average selling from 125 to 150 copies of the Courier," Denise added.

Food
The market's deli/food operation offers many numerous options for breakfast, lunch and dinner, with some customers eating all three daily meals there. Originally, selections were limited to cold sandwiches, hamburgers, hot dogs and chili dogs, but over the years that has changed dramatically.
"We expanded the kitchen area in 1998, which included larger conveyor ovens for our popular pizza business that had quickly out-grown its space. We also added a deep-fryer that tripled our previous menu variety to include appetizers and side items ranging from hot wings to cheddar/pepper munchers and fries and onion rings all the way to full chicken strip and catfish dinners. Plus we now offer Whitt's barbeque as well. For dessert, or just a treat, there's soft serve ice cream and what's been known for years to be the best shake in town!" noted Denise.

It was during this same expansion that the store's office space was also significantly increased, being as "future Whitlock family members" were on the way. And, with added security in mind, they also enclosed a private parking area for the children and store owners.

Hardware
Seven years ago, the addition of a completely new and separate hardware department significantly increased the store's all-around service to the community. "Many people may not even be aware of how extensive the selections are, but we stock a broad range of plumbing, electrical, lawn and garden, fencing, and building products, not to mention, an entire wall of nuts and bolts, plus specialty items," Denise explained.

Besides all the physical goods and services 53 Market has to offer, it's also known as the community's "unofficial" retirement and social center. Buddy Davenport went so far as to say it's an "institution" within the area. Certainly without it, things just wouldn't be the same, and it's definitely the place to go if you want to be in the know!!

When asked, "off the record per se", about the possibility of permanent retirement, Mr. Whitlock responded after so many years of being intertwined with the local community on a daily basis, he just really couldn't imagine such a thing. But, he did add, if he knew of some local family that would like to come in, take it over, and continue the legacy of running it as a "family business" for which it's been known all these years, he would love nothing more.

Print
Members Opinions:
edwina
[Delete]
Love this family! They have always been there for the entire county!