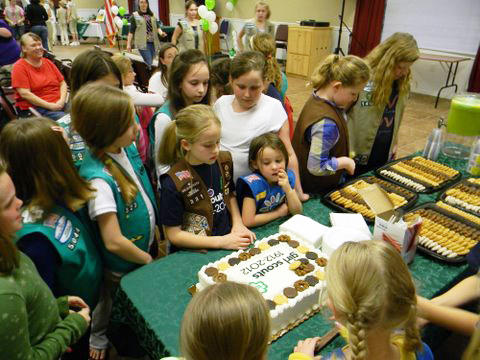 Girl Scouts in uniform gather around the refreshment table after the 100 year celebration of Girl Scouts at the Cannon County Senior Center Community Room. Every variety of cookie was available with Samoa being the crowd favorite.
On Monday, March 12 the Cannon County Girl Scouts Celebrated 100 Years at Senior Center. Emily Tate, our Service Unit Leader opened the program with welcoming the approximately 80 in attendance.  A formal flag ceremony was performed then all of the Daisy Girl Scouts in the audience came to the stage to lead the American pledge followed by all of the Brownie Girl Scouts reciting the Girl Scout Promise.  Then the Juniors recited the Girl Scout Law.

Katie Marrisa Pack, Junior Girl Scout from Troop 5044, shared with the audience about Juliette Gordon Low, founder, and how Girl Scouts was formed in Savannah, Georgia with the mission of building girls of courage, confidence, and character, who make the world a better place.

World Thinking Day was just completed for 2012.  Jade Barrett, Caddette Troop 1407 told the audience how each troop selects and learns about a country and presents a booth for all of the members to visit.  With a World Thinking Day passport individuals see how girl scouts from that country live, what they wear, what they eat, and play.

Megan Alviar, Cadette Troop 1407 had bad news for the audience about the time capsule buried in Auburntown 20-30 years ago.  Cookie Ganoe was a troop leader for a junior troop then and they buried it “just to remember what had gone on in our lives at that time.” With the cooperation of Roger Turney, Mayor of Auburntown, they buried their capsule at the front of the sign at C.S. Hawkins Park in Auburntown.  With the permission of Mrs. Ganoe and Mr. Turney, we attempted to exhume their capsule and share its contents.

Unfortunately, after two hours of digging a good Samaritan arrived on the scene to report that the area had been landscaped at least twice in that amount of time and that their time capsule was likely disposed of.  Rebecca Bryan Tate, was one of the members who remembered burying it and she recalled that they included a M.C. Hammer doll, a cassette tape, and newspaper from that time.

We have learned from this experience and have made plans for our commemorative time capsule to have bit more permanence.  Sam Newman, Senior Troop 1407 explained our plan for a 6 inch PVC pipe that is 12 inches long with caps that will be sealed.  Included in our capsule will be the centennial patch, a cookie order form, the sign-in sheet and a CD of pictures from the celebration event.  We will also be including an envelope from each troop in the county that will include letters and drawings from the girls, and whatever their troop deems significant to their group, as long as it fits.

We thank Mr. Mike Gannon, County Executive, for allowing the Girl Scouts of Service Unit 158 to place this on the courthouse lawn and being very generous by offering to place a stone over the location so that it will be marked to be opened in 25 years.

There were two gentlemen receiving very special awards from our Service Unit, the Green Knight Award recognizes excellence as a male Girl Scout volunteer.  This honor went to Mr. Mike Gannon, County Executive and Estel Parker, Community Center Director.  At this time Mr. Gannon presented a proclamation regarding Girl Scouts celebrating 100 years.  Our service unit also presented Emily Tate with a Green Angel patch for all of efforts as our service unit leader who keeps things going in our county.

The closing ceremony consisted of retiring the colors, singing Taps as the all of the current and former Girl Scout members joined hands in the Friendship Squeeze.  We then adjourned to enjoy lots of Girl Scout cookies and a Girl Scout cookie cake provided by Hibdon’s Body Shop.