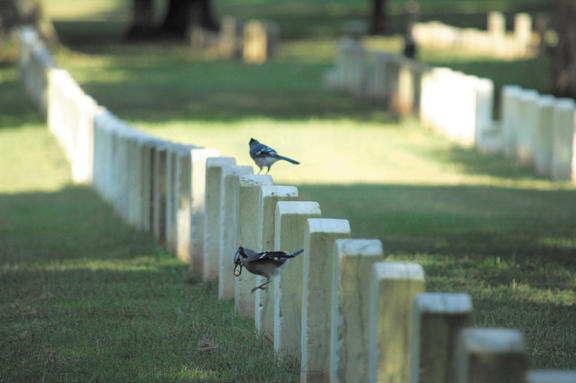 There are numerous paranormal events reported at Stones River National Battlefield, but the "Headless Horseman" heads the list of inquiries at the park.

"Garesche is the 'star' among all our reported sightings," veteran park employee Bill Reese confirmed. "We have a dramatic increase in tourists and inquiries each year as Halloween approaches."

Reese is speaking of Union Lt. Col. Julius Garesche, who had a premonition of his death before mounting his steed for the Battle of Stones River … Garesche's first and last combat of the Civil War.

His premonition held true, when a cannon ball ripped his head off while riding into battle at the southeast corner of the present-day Stones River Cemetery near the railroad, toward the Round Forest.

That cemetery, built initially by former slaves who served with the Union army, is one of the oldest Civil War cemeteries in the nation.

But his ghost has been spotted back at Stones River Battlefield multiple times by nearby railroad workers and Civil War-period re-enactors.

Devout Catholic Garesche had numerous premonitions of his death in battle, something he discussed with his brother, Father Frederick, a priest, who also felt his brother would be killed in battle.

"Despite being convinced he was destined to die a martyr for the Union cause, Garesche applied for field duty with his old friend Rosecrans, who appointed him his chief-of-staff," history records confirm.

On Dec. 31, 1862, Garesche took Holy Communion in preparation for the day's activities, which soon became a battle as Confederate Gen. William Hardee launched a sudden attack.

"Fearing his friend Rosecrans was exposing himself to great danger by riding ahead and gathering his troops, Garesche dismounted his horse in order to read from his prayer book," Watson shared from historic annals.

"Remounting, Garesche galloped into battle, only to be met with a blast from a cannon," Watson detailed. "His white stallion continued on with the headless body for approximately 20 yards, before the corpse tumbled to the ground."

Part of the battlefield is  known historically as the "Slaughter Pen," an apt description since thousands were wounded and died there

Noted Civil War historian Jim Lewis, who has worked as a park ranger at Stones River National Battlefield for more than a decade, says the Slaughter Pen (Stop No. 4 on tours) was given its' gruesome name because a third of Union Gen. Phil Sheridan's division and three brigade commanders were killed in the cedar forest after Confederate soldiers took them by surprise.

A local "ghost hunter" has been quoted as saying there are "thousands of spirits" in the battlefield park, making it perhaps Murfreesboro's most ghost-inhabited site.

But, there's more "ghost sightings" than the "Headless Horseman."

As a youthful Middle Tennessee State University student, Jeffrey T. Leathers was camping near Tour Stop 3 with fellow re-enactors in 1978 when he noted his canteen was empty.

Leathers, who later became a Stone's River Battlefield National Park employee, headed to the park's main office with his canteen in hand.

"Heading to the administration building to refill it, he came around a bend in the path only to see a man dressed in a period uniform, standing behind some bushes," Watson described. "Thinking his young reenactment friends were playing a joke, Jeff called for the man to come out in the open.

"As the man approached, he raised first one hand and then the other, as if to surrender," Watson shared. "Fearing for this safety at this point, Jeff called out to the man that he had a gun and would shoot.

"But, just as Jeff uttered the last word and raised his rifle, the man fell to ground, disappearing into the darkness. No evidence was ever found of the man … no footprints, not a single broken twig."

Where did the "man figure" go?

"Abby would stop, stand still, but then she'd start shaking when we neared the flag pole area," said Ranger Stresemann, now assigned to the Gateway Arch National Park in St. Louis. "She wasn't acting like she was seeing a rabbit … Abby would shake uncontrollably.

She cited other unusual phenomena.

"I don't know how to explain this, but in walking across park grounds, I oftentimes recall walking into a 'cool spot' … sometimes maybe 10-degrees cooler on a hot summer day," Stresemann added.

"I'm sure there are," Stresemann stressed in conclusion.