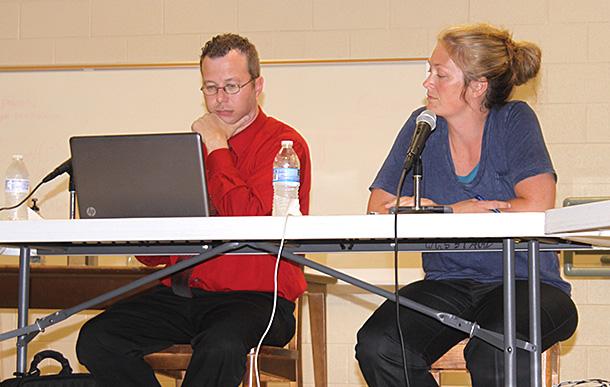 Newly elected board member Shelley Walkup listens to the discussion along with Nathan Sanders.

Randy Gannon was re-elected Cannon County Board of Education chairman during Thursday's (Sept. 11) meeting.
Gannon was nominated by board member Nathan Sanders and seconded by Bruce Daniel. Sanders, in turn, was nominated for vice chairman following a delay among board members as they pondered the responsibilities of the post.

It was the first meeting for newly elected board member, Shelley Walkup.

"Mrs. Walkup would you like to do that?" asked Gannon, referring to the vice chairmanship.

"Nominate someone?" she quipped to the laughter of those attending.

Sanders was then nominated and elected by acclamation.

While much of the meeting was merely business as usual, the board heard again from Tony Stinnett, Courier Sports Editor, concerning his ongoing ban from school property.

"I represent the Cannon Courier newspaper, let them be accountable for my actions," Stinnett said, pointing out that that he had been allowed on school campuses eight times since being dismissed from his post at Cannon County High School some nine months ago.

During each of those visits "for work purposes" he was accompanied by school staff members.

Stinnett attempted to present documentation concerning a similar faculty ban that was enacted during the previous administration of Dr. Edd Diden that was overturned by current Director Barbara Parker. Stinnett was overruled by Chairman Gannon.

"The agenda is your ban," Gannon said. "We're talking with you and about your ban. That's another issue. It's your ban that we are dealing with."

Sanders asked what are the options in this case. "I would like to move forward, but not sure what options we should take."

No action was taken by the board.

"You can keep your ban and all I can say is best of luck to the kids in the halls of those schools. I find it totally deniable that I have ever done anything to harm them. Instead I have tried to promote them to the fullest," Stinnett concluded.

In other action, the board:

* Approved male and female complaint managers for each school.

* OK'd coaches and practice schedules for elementary and high schools.

*Approved Rachel Guffey as a volunteer band assistant for after school training purposes.