From Short Mt. to NY Times 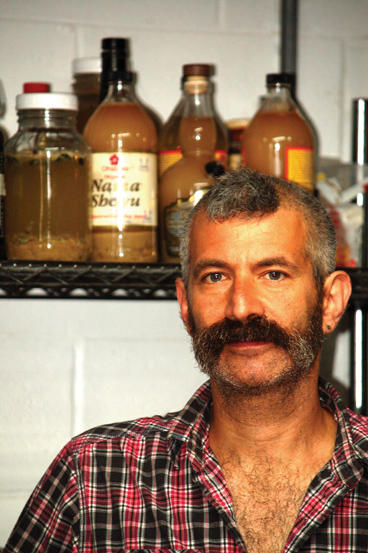 Sandor Katz's book, 'The Art of Fermentation' has carried him across the world.

SHORT MOUNTAIN: What does yogurt, kraut, dill pickles, country ham and moonshine have in common?

The shared commonality before human consumption of the above is "fermentation."

Next question: How does fermentation transport an unknown author from the backwoods of Middle Tennessee to an extended stay on the New York Times' best-seller book list?

Katz and his latest book - "The Art of Fermentation" - have remained on the Times' best seller list since April 2012. He published two other books on nutrition prior to his current hard-bound best-seller available on Amazon for a suggested price of $24.06.

Plus Katz and his fermentation workshops have spread from atop Cannon County's Short Mountain to multiple foreign counties and a majority of America's 50 states.

The day after this interview, Katz made one of his frequent trips off the mountain to board a plane at Nashville International Airport, bound for New York, the city where he grew up after immigrant grandparents came as children from Lithuania and Russia in the early 1900s.

"I'm scheduled (Wednesday, April 24) for a work shop at New York's Museum of Natural History, where I'll share with them practical information about fermenting vegetables, fruits, grains, milk, beans, meats, and more," Katz shared. "And yes, I keep Nashville Airport pretty busy...to get to my workshops around the globe."

When asked for a job description, Katz calls himself a "fermentation revivalist" as his explorations in fermentation evolved from overlapping interests in cooking, nutrition and gardening, dating back to his youth.

History is the foundation of Katz and his fermentation movement.

"Since the beginnings of human culture, we've been nourished by fermented foods...bread, coffee, chocolate, beer, wine, cheese, sauerkraut are a few of the most familiar," Katz lists.

The beer he noted goes back to earliest recorded Egyptian history.

The grain used in producing moonshine doesn't have as far back to go at the nearby Short Mountain Distillery?

"Moonshine is fermented, too," Katz confirms.

At this juncture of the interview, Katz shared about his longtime friendship with Short Mountain Distillery founder/owner Billy Kaufman.

"I rent space here near the Distillery, where I conduct workshops and conduct experiments with various foods and grains," Katz noted as he examined multiple jugs, crocks and jars containing various nutrients at different phases of fermentation.

Kaufman acknowledges being a "Katz fan."

"My family has Sandy's best-selling book on our living room coffee table...we refer to it so frequently, the book is well-worn," Kaufman credited. "His book is found in homes kitchens around the world.

"Like a cookbook, we frequently take Sandy's to the kitchen, to teach ourselves how to process food, perhaps like the ways our grandparents used," Kaufman added.

California-based author Michael Pollan, one of America's most recognized authorities on food and culture, wrote the forward in Katz latest book.

"An inspiring book, and I mean that literally," Pollan penned. "The book has inspired me to do things I've never done before and probably never would have done if I hadn't read it. Sandor Katz writes about the transformative power of fermentation with such infectious enthusiasm that he makes you want to try things just to see what happens."

College professor Pollan was listed in 2010 as one of Time magazines' 100 most influential people in America.

"Katz's book is the main reason that my kitchen counters and basement floor have lately sprouted an assortment of mason jars, ceramic crocks, jelly jars and bottles," Pollan added. "Since falling under the spell of Katz's fermentation evangelism, I have launched big crocks of sauerkraut, mason jars of pickled cucumbers, carrots, beets, onions and five-gallon carboys of beer and mead. All of them, I'm reminded, are 'alive.'"

In "The Art of Fermentation," Katz offers a comprehensive guide to do-it-yourself home fermentation, plus the history of mankind's fermentation and food preservation processes.

His home-based workshop atop Short Mountain, is alive with fermentation.

Just outside Katz home workshop door on the date of this interview, a proud-strutting bright-colored red rooster crowed loudly the arrival of a spectacular new dawn atop Cannon County's highest elevation point of geography.

And just beyond the rooster, stood a plate filled with sliced cabbage, as it sat quietly fermenting as part of a sunshine-filled research day for author Katz.