Friends 'sock it to' Bro. Herb 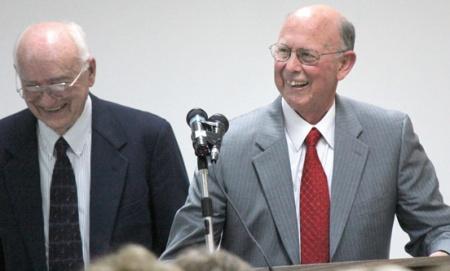 Herb Alsup, right, roars with laughter after his introduction by Charlie Harrell.

"Friends of the Library" honored retired Church of Christ Minister Herb Alsup on Thursday the 25th of April. This event, the 7th of its kind was appropriately held in the Fellowship Hall of the Church of Christ on the hill. Charlie Harrell emceed this event and it was a complete success.

Herb was born in Rutherford County to Herbert Alsup Sr. and Naomi Lewis Alsup. He attended Central High School in Murfreesboro. After graduating from Central High he attended David Lipscomb majoring in Bible and Math, he also excelled in Tennis. After college he went to Florida for his first ministerial position in Graceville Florida. He helped the church grow doubling its size. He then moved to Winter Garden Florida where the church grew from 125 to 175 in six years. After a brief time in Panama City, at the Palo Alto Church of Christ, Herb moved to Woodbury and the Woodbury Church of Christ. This was in 1979 and he spent the next 34 years tending to his flock. The community of Cannon County came to know Herb for the work he did in the county with the various organization such as the Library, the food bank and the Short Mountain Bible Camp where he served on the camp's board of directors for 18 years.

Herb has served on the board of directors of the Stones River Hospital for several terms, and presently serves as chairman of the board.

The guest speakers or "roasters" were all friends of Herbs' who has known him over his life. Fred Goodwin, from Rutherford County told tales of both he and Herb when they were growing up in Murf-reesboro. Of course there was nothing very spicy being said because Fred told the crowd that Herb always had it on his mind to go into the ministry.

Ron Harper from the Minerva Drive Church of Christ talked of the mission trips that he and Herb would go on, places like Jamaica. Ron said that Herb had a great ability to inspire young men to enter the ministry such as Herbs nephew Tim Alsup. Ron closed his session by saying that anyone that knows Herb is better off for it.

Next on the agenda was local attorney Mike Corley. Mike asked the question if anyone had heard of a retired minister of the Church of Christ? Mike says that Herb was really good with numbers and used to always know how many people were at church and even remembered that he had officiated at over 1300 funerals in his time in the pulpit.

Billy Smith, Dean of the Bible College at Freed Hardman University. Billy gave some humorous anecdotes about Herb and preachers in general. He said that Herb had a way with welcoming the new babies that were born in the church when he saw them for the first time. He would say "Oh what a beautiful baby". If they weren't pretty babies he would say "they look just like you."

You could tell that all the roasters had a lot of love and admiration for Herb Billy described Herb like this; he is a servant, a preacher and teacher, a friend, a visitor to everyone, a counselor and comforter, a promoter , an administrator, a church builder and faithful.

When Herb got up he did not talk about himself that much as usual. He talked about how in 1954 Dr. and Mrs. Adams gave the land on Short Mountain to start the Bible Camp, and on how fortunate he was to be able to be involved with projects with the Adams Memorial Library.

In closing Herb told his friends that even with all it took throughout the years to be a minister that "preaching is a calling and he would do it all over again."