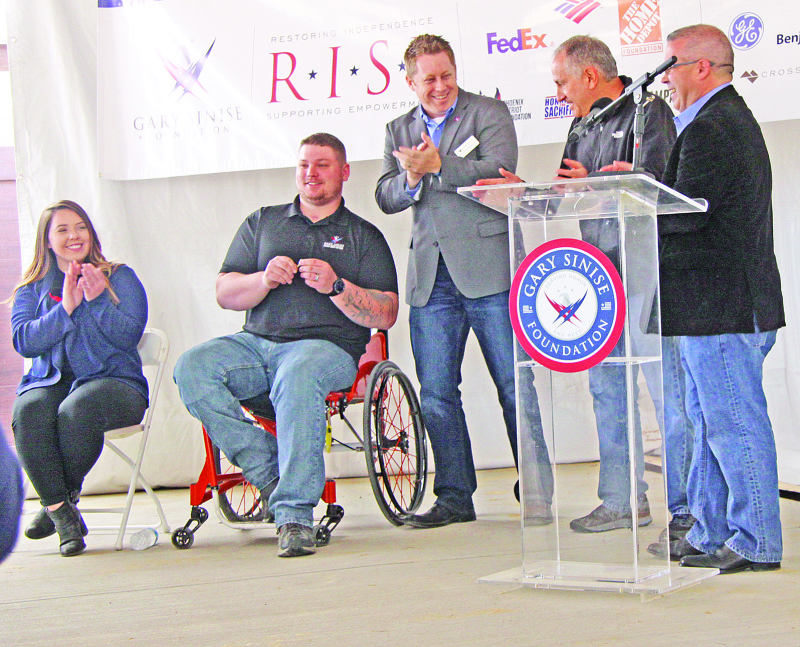 It was a special moment when Franz and Shannon Walkup received the keys to their new home.

Some 250 people from across the nation, welcomed Sgt. Franz Walkup and his wife Shannon to their new "forever" home near Woodbury.

Construction of the custom specially adapted home was made possible by the Gary Sinise Foundation working in conjunction with a number of other groups like the R.I.S.E. Team.

Long months of work paid off Thursday, December 22 with the dedication of the home.

"This is the start of a new beginning for Franz and Shannon. Welcome to your new forever home," said Scott Schaeperkoetter of the R.I.S.E. Team.
The story's beginning was on September 29, 2012 in Wardak Province, Afghanistan, where Franz sustained five gunshot wounds from Afghan National Army soldiers.

Franz was flown to a military hospital in Germany and on October 12, 2012, he arrived at Walter Reed National Military Medical Center. His wife Shannon has stayed by Franz's side throughout recovery.

"Shannon's been here with me through thick and thin. I think I would label our first three months of our marriage one of the toughest parts ... and we've finally come to the end of it and still be in love with

each other, still supporting each other. It's been a rough road but we finally got on some smooth pavement," he smiled.

It has been a long recovery for Franz with three long years spent at Walter Reed only to discover there was little help available for soldiers who didn't lose a limb in combat. Walkup endured 75 surgeries and still has a complete loss of function in his lower right leg.

Actor Gary Sinise first heard of Franz' plight on the Internet two years ago. Sinise, best known for his role as Lt. Dan in the movie "Forrest Gump." works to ensure the sacrifices of America's defenders and their families are never forgotten.

"Gary is a real, genuine person and he's gonna come out later on and tour the beautiful house he built for us and we can't wait to see him," Walkup said.

Schaeperkoetter, from Jefferson City, Mo., works with R.I.S.E., a division of the Gary Sinise Foundation, which currently has some 52 homes either built or undergoing planning or construction.

"Our goal is to deliver a home that meets the needs of veterans. Thanks to our donors. When we build these homes we depend on all our national partners," Schaeperkoetter said.

"It's been a long road and we were so excited when he got the news about being able to move into this beautiful home before Christmas. That just went over the top with emotions and we are super excited. This house is more than we could ever dream of, so being in this house before Christmas adds another special piece to it," Franz said.

"We had some hurdles in the beginning but once we got the call from the Gary Sinise Foundation. We trusted them from the get-go and they made it so much easier to get the house and everything situated. They had done it several times before so it's not their first rodeo. They knew what we needed. We are so blessed," he continued.

Walkup described the Gary Sinise Foundation as a big umbrella. Beneath them there are so many small and large donors. None of this would be possible without them. It's a big team. It's not just one person.

The process of getting the new home was surreal to the Walkups.

"This doesn't happen to everybody. It's such a unique experience and we are truly thankful for it," he said.

The new home was designed to be specially adapted to Franz' needs.

"The house is set up to be run on an iPad or an electronic device in the home, and it will control the heat, lights, the security system, the garage doors, everything that I might forget when I get into bed and I think, man I should have shut that garage door. I don't have to get out of the bed, get in the wheelchair and roll across the house. I can do everything on an iPad. It's not a daunting task anymore," he explained.

Standard houses have narrow door ways that aren't really accessible to wheelchairs. This whole house had that in mind. Everything is set up to be accessible from Franz' wheelchair.

Shubert got involved with the Sinise Foundation when he heard a news story at an airport in Missouri about what the organization was trying to do. A Vietnam veteran, Shubert served as a medic with the 101st Airborne. He had pushed his wartime experiences out of his mind, but the news story brought them back.

"I was having a panic attack at the airport and my wife said 'call him up,'" Shubert said. He did and the first veteran the Schubert helped was a quadruple amputee.

The Sinise Foundation and its related "helpers" include "a lot ot smart people who are really buttoned up. It's an efficient non-profit where every penny is closely watched," he said.