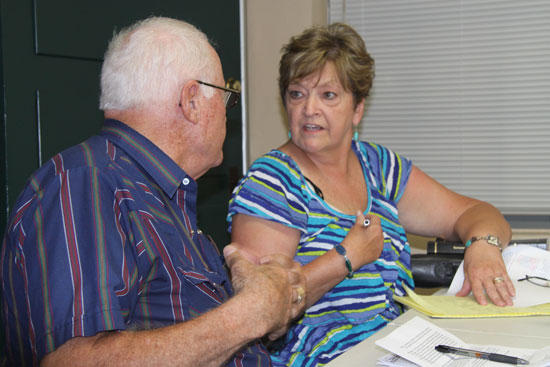 Bush, who was not reappointed as AOE in favor of Stan Dobson in 2009, has nine years of experience in the Election Office and is certified as an administrator. The Election Commission voted 3-2 to terminate Dobson at its July meeting last week.

Bush has a lawsuit pending against the Cannon County Election Commission for the manner in which she was not reappointed in 2009. The issue was brought to the attention of the commissioners.

Bush was in the audience and explained that her attorney said there would be nothing legal keeping her from serving as the interim AOE.

The position will be advertised and a permanent AOE will be hired following the August and November elections.

Studd had provided Deputy Administrator Dorinda Mankin's name for consideration for the interim AOE position, saying she was experienced, was currently in the office and was up to date on current laws. There was never a motion submitted in favor of Mankin.

Once the Election Commission appointed Bush as the interim AOE, Mankin told the commissioners she didn't believe they had given her an equal opportunity. She submitted her hours to Chairman Dennis, turned in her keys and left the meeting.

The meeting began with Dennis, the Election Commission Chairman, telling the group he wasn't sure the termination of Dobson was done properly and may not be legal. He asked the commission to reinstate Dobson for two weeks while another special meeting was properly advertised.

Dennis told the commissioners they would fire Dobson by the same 3-2 count at that meeting but at least proper protocol would be followed. Gannon strongly disagreed and after much discussion the motion to table the current meeting and reinstate Dobson failed 3-2 with Gannon, Mayo and Patrick voting against.

Print
Members Opinions:
Denver01
[Delete]
This make me wonder even if they will be able to have everything in place come voting time in November. The way things are going I seriously doubt these any will get done until all of these unprofessional election commissioners are replace. Are there even any requirement or qualifications for be a commissioners or can just anybody be one? Because it seems we let any person have a elected position, especially unqualified ones , this being a good case in point in my opinion.
dsherron26
[Delete]
In this case, one qualification or disqualification is having a case against the very commission that is hiring you.
dsherron26
[Delete]
Oh and don't make any of the other commissioners mad by voting against them.
ftenpenny
[Delete]
So if Bush don;t get the job full time will she sue the county again.Ms Mankin I suggest you file a complaint against all involved.Contact the A.C.L.U sounds like a case they would like.Good luck
dsherron26
[Delete]
Does this mean her lawsuit is thrown out or dismissed? I am under the impression she is working for the commission WHILE suing them. What a mess this has become.
mkeller
[Delete]
I think the mess has only started, and that we the people of Cannon County will be seeing many more lawsuits in the near future. But fear not I was told by one commissioner that we have insurance! I hope it is enough.
Jack
dsherron26
[Delete]
It just looks bad, and could've all been avoided.