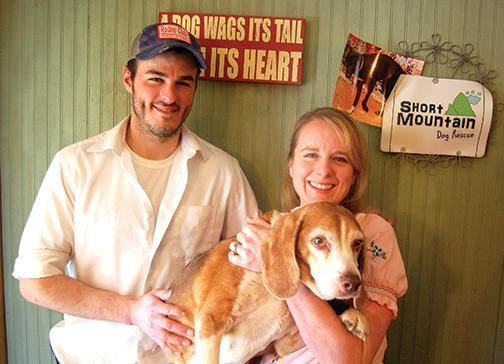 Upon entering the living room of Miranda Caffey-Vogeler and Neil Vogeler, a visitor is liable to be sniffed or licked to death.

The husband and wife duo provide a haven to seven dogs, while that number sometimes gets as high as 12, at their Short Mountain Dog Rescue, a nonprofit they began in 2008. To date they have placed 120 neglected or abandoned canines in good homes.

“You’d have a car pull over and suddenly four dogs are there. At first we were like, ‘We should do something,’” Neil recalled.

“We’re gonna do it.” Miranda exclaimed as she shared that their mission “is to rescue, provide sanctuary and ultimately to re-home abandoned, abused and neglected dogs. We started taking them in. Most of them are females, and most of them had puppies. That’s what we learned.”

The pair gets a lot of help from their friends, and their dogs, which are continually coming and going, receive professional attention from Dr. Gayle Tate of the Cannon County Animal Clinic.

“He’s our vet. He really helps us out a lot,” said Neil. “We love him and take all our dogs to him,” Miranda echoed.
Responds veterinarian Tate when asked about the couple’s passion of caring for unwanted dogs, “The number of stray dogs is a huge problem in Cannon County, and there is no public answer to the problem whatsoever. They provide the best they can for what dogs they deal with. What they provide is a great service.

“They’re probably overwhelmed because they can’t keep up with the number. They can’t service every dog in Cannon County, but they sure try on their scale. It’s a great hardship they put themselves through,” Tate said.

Miranda has worked in the restaurant business for the past six years for Karen and Bob Ford, who recently relocated their Good Gracious Café and Catering from the Boro to the Readyville Mill.

Married nearly six years, the couple lived in a shack on Short Mountain for five years, but a few months ago they moved into a hollow above Dry Creek near Dowelltown, about three miles outside of Cannon County as the crow flies.

“I went to Short Mountain a lot as a youth,” said Miranda. “I love the beauty, the nature, the way the streams coming off the mountain carved these little hollows. I told myself, ‘One day I’m gonna live there.’ It was like the land spoke to me.

“I brought my Yankee husband here and said, ‘You want to go live in a holler?’” she laughed.

So now the pair with two pet dogs, five rescue dogs and three rescue cats live in an old farmhouse where they heat by firewood and drink from piped in spring water. A sign on their living room wall reads: A dog wags its tail with its heart. An American flag ripples in the breeze that whips across their porch that stands five feet above the front yard.

“Usually it is a barkfest,” she says of the rare occasion when a stranger knocks on their door. “We found that this dead end road is perfect [for the dogs].”

The lucky canine citizens here include Millie, Neil’s 11-year-old pet Labrador; Jack, Miranda’s pet beagle; Lucy, a coon hound and hit-and-run victim found in a pool of blood; Birdie, a half coon hound, one of 12 left by the roadside; Beau, a mixed shepherd, dumped by the side of the road and pregnant with 12 pups (“I named her Beau because of the bow left around her neck,” says Miranda); Diego, a terrier that was a skeletal mess when they found her; and Sadie, a German shepherd that was dumped and pregnant with four puppies when they rescued her.

“We get calls constantly. We both work full time. We try to take the worst of the worst,” said Neil.

“We try to be a force for good. What I realized, most people around here are doing what we’ve been doing. Everybody in Cannon County seemed to be feeding three or four stray dogs. People from the city were coming out and dropping dogs off, and Cannon County gets a bad rap.”

“We didn’t want to go public, so we just take them in and re-home them,” Miranda said. “I used social media to promote our efforts and tried to do fundraising. We’ve put flyers in gas stations. It takes a lot to feed these dogs and we also give dog food to others who are taking care of dogs.”

She keeps a bowl out at Good Gracious at the Mill where diners can drop donations if they wish.

“I’ve got a waiting list of 30 dogs that people want us to take them in and find a home,” she noted.

“We get calls every day,” said Neil.

“We have to say, ‘No, we can’t. Please give us a picture of the dog and we’ll try to help find a home,” Neil said.

Miranda said, “I’d love to have 50 dogs, but we have to live here, too. I want to have a dog sanctuary. Here they can live a real good life and we can re-home them, too. I’d like to take in more, but I can only feed 8 or 10 at a time. We have re-homed 120 dogs off of Short Mountain.”

Why do the dog devotees do what they do?

“We wanted to help the animals of Cannon County and really it was so needed. Somebody needed to do something. Well, Neil and I will be that somebody,” said the woman whose home has gone to the dogs in a good way.