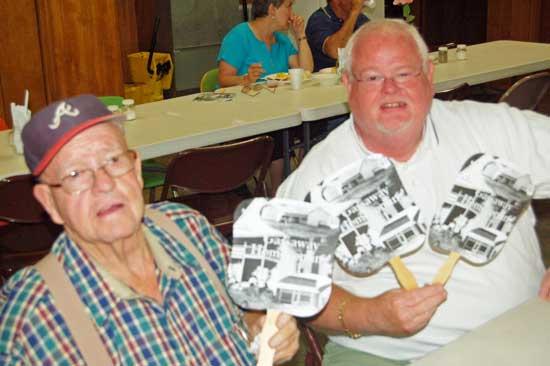 But Hoyt Carter Sr., of Nashville, brought the first automobile to the unincorporated village

Mr. Carter shared his “delivery” of a T-model Ford.

“I delivered the car to a place way up in the Cumberland Mountains, a place called Gassaway,” Mr. Carter shared in an interview in the mid-1980s. “I recall trying to ford (cross) a creek, and the car drowned out.

“A farmer with a mule came along and pulled us out of the creek, and after finally getting the car cranked again and up and running, I drove the car on into Gassaway,” Mr. Carter noted. “I can’t remember the date or the gentleman’s name who took delivery of the car, but I think he ran a bank there in Gassaway. I delivered the car for the Hippodrome Motor Co. in Nashville  in the mid-1920s.”

Mr. Carter lived to within 3 days of age 99. His son, Hoyt Jr., and I are former associates at WNAH Radio in Nashville.

This and other remembrances came to mind at the recent 2011 Gassaway Homecoming, an annual event that draws hundreds to the unincorporated village that sits serenely in the rolling hills between Woodbury and Liberty on Highway 53.

Being unincorporated, Gassaway doesn’t have a “mayor.” However, lifelong Gassaway resident James Hancock is recognized as the quaint village’s honorary “mayor.”

If not an official mayor, he’s recognized as a walking and talking encyclopedia of all things Gassaway, past and present.

Mr. Hancock took time away from his country ham and thickening gravy as he fellowshipped with Billy and Sue Willoughby, of nearby Alexandria, and Jenelle Pugh, of Doweltown.

Gassaway Homecoming volunteers Karen Ashford and Mike Gann generated the most homecoming smiles as they served up heaping portions of goodwill and scrambled eggs and fried “taters” in the food line of the old Gassaway Fire Department building.

It was a good time for catching up among neighbors, as evidenced by Realtor Dwight Vinson who moseyed over to Gassaway from neighboring Rutherford County.

“I’ve known Wayne and Rosemary Reed for a number of years,” Vinson noted from behind a piping hot cup of coffee. “Good people…”

Jennie Rose was in charge of the Gassaway Fan Club, as she handed out beautiful old-timey hand fans to longtime friends James and Sue Maxwell, of Doolittle Road domain.

“My uncle cut hair here in Gassaway, and I attended Gassaway School,” bragged Rose, whose “fan club” was obviously growing.

“We try not to miss Gassaway Homecoming,” echoed James Maxwell.

“Same for us,” noted Murfreesboro resident Josephus Arnold. “We come each June for the Homecoming.”

“Ain’t nothing to cuss or fuss about in good and gracious Gassaway,” Salyers praised as his son, Randolph Salyers, parked their car. “This breakfast is delicious.”

“Ain’t no parking meters in Gassaway,” Randolph noted between bites of country vittles. “You just pick a spot and stop…”

The Salyers are part of the travelling “Smyrna Saturday Breakfast Bunch.”

“We journey miles and miles for a good breakfast,” echoed Randolph. “We’ve been to Joe’s Place in Woodbury, to the Readyville Mill in downtown Readyville, plus the Mid-way Cafe, where you can always get a decent cup of coffee in Deason…”

“We had a Cannon County Sheriff’s deputy out, who noted you had to catch the vandals first hand in vandalizing the tomb stones,” Judy noted. “They seem to be toppling the older stones…”

“It’s a disgrace,” agreed secretary Francis as she relieved Judy in order for her to consume some mighty tasty morsels.

As dozens of folk fellowshipped in the Gassaway Fellowship Hall, Harry Vedder and his son Trixi of nearby Turkey Branch were setting up their crafts booth on one of the beautiful rolling hills that Gassaway is known for.

Harry likely sported the longest grey beard at the Homecoming.

But “beards” seemed to be in Gassaway fashion as evidenced by Mitchell Thomason.

“I can’t remember my husband not having a full-growth beard,” confirmed Mary Thomason from their family’s crafts booth.

The Thomasons were being assisted by daughter Faith Bass and children Rachel and Destiny.

No one knows where Gassaway officially begins or ends…it’s a feeling of being amongst real good folks who live in the shadow of majestic Short Mountain, the highest elevation point of Middle Tennessee.