Down on the EXOTIC farm 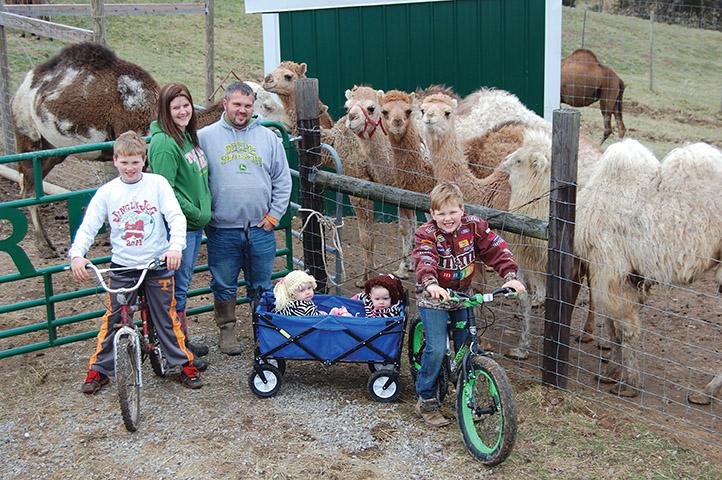 Jason and Allison Greer and their children, from left, Bryson, twins Jessi and Jayci, and Mason, enjoy life on the family farm, 171 Rolling Hills in Brush Creek, where, besides cattle, donkeys, poultry and fainting goats, they raise zebras, kangaroos and

As you veer into the driveway and pull up to the red brick house, visitors likely notice the dog, chickens, ducks and geese and a neighborly pot-bellied pig patrolling the big back yard.

Off to the side two dozen goats huddle in a small clump, and beef cattle can be seen grazing on a distant hill.
At first glance the Greer farm in the Smith County community of Brush Creek appears to be just another family farm.
But then you look to your right and spot a congregation of a dozen or so camels and to the far left you observe five ponies in black-and-white pajamas, causing you to think "are those zebras?"

And finally, if you stretch your neck and look yonder way behind some sheds, you shake your head in disbelief and ask yourself "those can't be kangaroos, can they?"

Your eyes are not deceiving you. Welcome to Allison and Jason Greer's exotic animal farm where every day is hump day. Here they raise cattle, poultry, goats and a few hogs, but their big concern is leasing and selling camels, zebras and kangaroos to petting zoos, private breeders and an occasional circus.

"I just always liked something different than a cow," says Jason, who grew up on a farm in Lebanon and showed sheep and cattle while in 4-H.

By the age of 14 he was raising emus and cattle, and after selling off part of his herd, he talked his dad into letting him plunk down $1,500 for a camel. A year later, with funds from selling his emus, he purchased his first truck.

"I guess that started the dream," reflected the 1994 graduate of Lebanon High who operated Jason's Produce, a roadside market on South Cumberland from 1993 until 2002.

While peddling tomatoes and other fresh vegetables to Depot Junction Restaurant in Watertown, he met the cook, Allison Bane, who grew up in Watertown and Woodbury. The two have been married for 13 years and have five children, sons Ethan, Bryson and Mason and daughters Jayci and Jessi. The family worships at Highland Heights Church of Christ in Lebanon.

"This farm is living my dream. I always wanted to have a big farm," said Jason, whose other day job is delivering mail on the west side of Lebanon. "I enjoy my family being with me."

The Greer's turned exotic creature entrepreneurs after Jason sold his roadside stand. In 2001 he took Allison with him to an exotic animal show in Cape Girardeau, Mo., and bought a pair of camels. Soon afterward, they purchased four female Damara zebra in Kentucky and then a pair of kangaroos from New York.

"We kind of jumped in with both feet and just kept adding a number of each of these. We finally graduated and went from 12 acres to 45 to 171," she says of their move to Brush Creek from the Lebanon area two years ago," said Allison.

"It started as a hobby, and this hobby has turned into a business, and the boys don't know any other way. This is what we've always done before they were born.

"The boys play every sport, but they realize they have chores and responsibilities every day, regardless of what time it is. There are times when they get home and may be milking the cow while wearing their football pads."

Indeed, there are chores aplenty for everyone except for 15-month-old twins Jessi and Jayci.

For all the critter diversity surrounding them, Bryson, 10, and Mason, 8, who attend New Middleton Elementary School, have taken up most with the poultry.

"I want you to see my 'big-dog chicken'," says Bryson leading the way to the barn. "Our dad owns some, but the majority of them are ours."

He and Mason grab their plump chickens and hold them up for close inspection. Bryson estimates he spends 30 to 45 minutes a day attending to his birds, and he and Mason plan to enter their big and little cochins in the county fair come summer.

While observing a camel, a zebra named Sugar and two donkeys named Liz and Blackie chewing on a round bale of hay, Bryson shares, "That zebra thinks she's them donkey's mama."

Jason takes pride in all these creatures, great and small, but may be partial to Solomon, Tilda and Baby Girl, his three Bactrian camels, the ones with two humps. Camels with one hump are dromedaries.

"The first question people ask about our camels is, 'Do they spit?' They don't unless you make 'em mad. They are calm and nosy, very curious," he said.

As for kangaroos, the famous Australian marsupials, they are fed Happy Hopper (a cooked food supplement with a special blend of whole cereal grains, protein, minerals and vitamins for kangaroos and wallabies), and their nature proves to be curious and laidback.

"They're not jumping off the walls unless you're trying to corner them and catch them," Allison reported.

The zebras, she says, are "stubborn like an ass and worse than a donkey."

The daughter of Tony and Janet Bane, who live in Woodbury, Allison graduated from Cannon County High School in 2000 and earned a degree in business management from Middle Tennessee State University in 2006.

"I left Wilson Bank & Trust to come home and do this and to raise my babies. So I'm the bottle feeder and the puller of the baby camels. This is a 365½-day-a-year job. It takes us all. We are a family-oriented unit," she said.

"I like that we are seeing the plan of a life cycle from birth to death, watching all stages of growth. The birthing season with the camels is exciting. You're trying to get the baby on the ground alive. It's a new adrenalin rush every time. I've learned what to do, just sit and watch and watch, but we still carry on a normal life outside of this life."

Normal, well, maybe 11 months of the year, because come each December the Greer's rent their camels, sheep and donkeys for church Nativity scenes across the state. That means Jason and Allison may be loading their creatures into trailers and heading in different directions, and the in-laws pitch in as well.

Last month their animals were seen in manger scenes in Memphis, McEwen, Portland, Dickson and Nashville. And if the churches don't want the camels held in a pen, Jason garbs himself as a wise man to stick close by and merge with the backdrop.

The Greer's own six of the approximate 60 "pied camels" in the country. These rare creatures are spotted and have blue eyes.

"Our breeding bull has blue eyes, and one of the main goals in the breeding program for our one-hump [dromedary] camels is to become a pied herd," said Allison.

"Also, with the dromedary camels, up north the Amish are milking them because the milk has been researched and tested to be beneficial for health reasons. We have leased and sold some of our grown cows to be milked."

(A 2014 article in the "L.A. Times" reported that camel's milk has no appreciable difference in taste from cow's milk and that it has 50 percent less fat and about 40 fewer calories per cup compared to cow's milk. Camel's milk, however, is more costly as a pint costs $16 to $18.)

A hard-working man, like all who choose the farming life, Jason says he gets the most pleasure from seeing a baby animal enter the world.

"It makes all the work you've done during the year seem like it was worth it," he said.

In the meantime, he keeps one more critter on his wish list.

"My dream animal is a giraffe. I haven't been able to talk my wife into letting me having one because they cost so much, and you've got to build a barn to put them in," said the menagerie man of Brush Creek.