Did Al Capone dial her death? 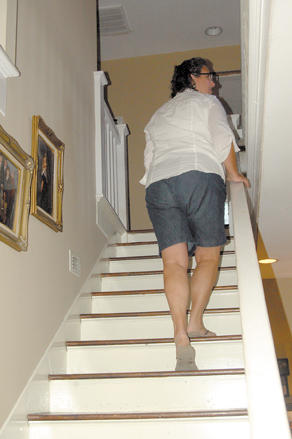 Part I of a series.

According to one paranormal spirit study expert, there are basically two types of ghosts … "residual" and "intellectual."

"Residual" spirits are defined as those who died natural deaths, but go about normal activities such as shutting doors or opening cabinets, while not accepting death.

"Intellectual" ghosts are described as spirits who often died in painful ways, and want to communicate back to the living.

There are theologians who believe some spirits hang in purgatory.

This journey into the spirit world involves a house reportedly filled with intellectual spirits, sometimes referred to as ghosts, spooks and "haints."

This particular family refers to them as "Shadow People."

So, sit back, relax (if you can) and prepare to read a ghost's tale that might make your hair stand up on the back of your neck.

There's a house by railroad tracks in Middle Tennessee that presently has six living breathing humans and two dogs residing there.

All living present-day inhabitants, including the canines, share the belief of active shadow people.

Research has confirmed Capone was frequently in the Wartrace, Tenn., area, where he had a mid-way house approximately at the halfway point between Chicago and Miami. This family's home is situated beside railroad tracks reportedly used to ship bootlegged whiskey to Chicago, Capone's base of operation.

This spirit tale's trail leads back to the 1930s, when Capone's people were in Middle Tennessee seeking product to ship by rail back up north.

"The old rural telephone company's switchboard was located here in the 1930s. Legend has it that one of the gangsters suspected that a telephone operator named Emma Smith had overheard some illicit plans the gangsters were putting together while boarding in this house here by the tracks where we live today," shared Candy Barnett, a mother, house wife and retired educator with a degree in education from nearby Middle Tennessee State University. "This house was built in 1923."

Mrs. Barnett and her husband are natives of Rutherford County, but for the past five years, have resided in the Wartrace area of Bedford County.

"We didn't know the house was haunted, when we purchased it five years ago," shared Mrs. Barnett, who at this point of an interview produced a copy of a newspaper story dated Sept. 29, 1936.

"Mrs. Emma Smith, 42, wife of Newt Smith, was found by a member of the family early Monday morning at her home stricken with symptoms of drug poisoning. A physician was called, but it was too late to administer the usual antidotes as she passed away soon after his arrival. She had been an operator and contract agent for the Southern Bell Telephone Company for several years."

Are those old gangsters hanging around today?

"We've had sightings of six men sitting around the kitchen table, in black suits and hats," Mrs. Barnett noted. "Plus, there have been multiple sightings of one gentleman in a dark suit that constantly stands guard around a little girl."

"Who in the family has had the most sightings, or experiences," I asked.

"Our daughter has had the most experiences … she was first to declare she was seeing 'shadow people' on a regular basis."

Now, the story gets even more compelling.

As Mrs. Barnett was sharing, a member of my investigative team stood up suddenly in the home's living room as the homemaker was describing shadow people sightings: "As I entered the house, I confirmed to myself, I don't believe in ghosts. But as Mrs. Barnett spoke, I noticed a shadow beside her face that wasn't there when she began talking. Then, the shadow moved from the side to the back of her, then stopped at the other side."

"That's happened before … we have one very clear picture of that type of phenomena," Mrs. Barnett confirmed before sharing the family dwelling was investigated in 2011 by a psychic lady with a doctorate who does field work for the FBI.

"When she contacted us, she instructed us to tell her no details of the shadow people we've encountered, or anything about the noises and screams we've heard down through the years," Mrs. Barnett continued. "Upon arrival, she instructed there are two types of ghosts, 'residual' and 'intellectual.' After her in-depth exploration, she shared that our spirits are the 'intellectual' types, meaning they are still here wanting to communicate with us.

"There was a paranormal study group that came and made overnight tapes with very sensitive professional recording equipment," the professional educator (now retired) offered. "Would you like to hear the tape recordings?"

The first recorded sound was a distinctive "ping" that repeated with another "ping".

During the next tape segment, one of the investigators asked a "girl" spirit's age. The number "12" was clearly audible, followed by the words: "I'm not dead."

On the next section of tape, was a very clear and loud scream.

The scream was followed with whispery words: "We're in purgatory."

At this juncture of the interview, Mrs. Barnett stopped the tape: "This next sound is a man's name with instructions: 'Call me Harry.'"

"This tells me our shadow people want to communicate, want to be recognized," Mrs. Barnett shared with obvious sincere emotions.

My investigative team member made her final report: "When Mrs. Barnett turned on the tape player, and they mentioned shadow people, I realized that's what I saw casting the shadow … a shadow person! I believe it now. I saw it."

The family regularly prays and declares: "This is a house of the Lord. We're Christians and we hope our shadow people clearly understand that."

Are there any rooms in the house most frequently visited by the shadow people?

"It's our daughter's room, but the most activity is upstairs on the second floor," Mrs. Barnett responded. "But, there is one place I won't go, refuse to go, will not go after dark. I won't go to the basement after dark.

"One night, not long after buying our home, I was headed down the basement stairs, when I felt something like a bug bite," she detailed. "But when getting back up in the light, I had small scratches that bled on my leg … this is the only incident that could be described as a physical injury.

"Plus, at night, we frequently view orbs floating around, not only in the house, but floating in the trees located between our house and the railroad tracks the old gangsters reportedly used to ship Tennessee moonshine up to Chicago," Mrs. Barnett added.

There was one other physical encounter.

"One of our daughters was sleeping late one night, when she awakened with a scream, feeling someone having a hold of and squeezing her leg with a lot of pressure," Mrs. Barnett responded when asked about any other physical manifestations. "When we got to her, there were clear hand imprints where someone had been grasping our child's leg … with no one else in the room or on the second floor that night. Thankfully, there was no permanent injury, but the hand prints and finger prints were clearly visible that night.

"Making it even more eerie, there was an indention on the mattress and covers where the spirit had been sitting while squeezing our daughter's leg."

How do the spirits manifest themselves to the family pets?

"Bailey is nine, our very smart and beautiful little dog," Mrs. Barnett shared. "Not much upsets Bailey, but a few times a month, when Bailey starts to enter the kitchen, he'll stop dead in his tracks, and slowly back out of the kitchen.

"That kitchen is where we've had multiple sightings of men visions, dressed in old timey business suits like from the 1930s, sitting around the kitchen table," she explained. "The only time Bailey backs up is when he backs out of our kitchen."

How long does the family intend to continue living in this house by the railroad tracks?

"We're doing some remodeling, before putting the house on the market later this year," she began.

"That brings up another point," concluded Mrs. Barnett. "Sometimes, when we start tearing out a wall … doing something major to change the inside appearance of the house, the shadow people let us know they're not happy. Their manifestations increase dramatically when we begin changing the appearance of this house."

(First of a series about ghosts as Halloween 2013 approaches.)