Debate lights up on poles 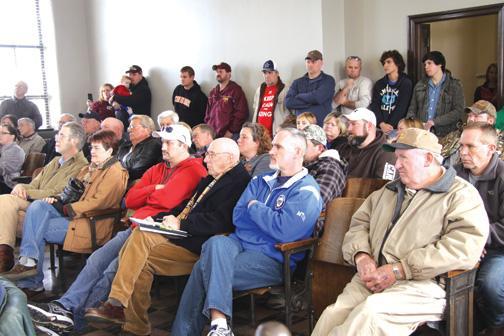 It was a full house at Saturday's County Commission meeting.

The vote meant that repairs will be done before the start of spring baseball practice at Cannon County High School.
However, the vote was preceded by considerable debate with Commissioner Kevin George reminding officials repeatedly about the impending start of the season.

But Commissioner Jim Bush expressed concern about the wiring and lights on the poles.

“Wouldn’t it be more energy efficient to put up less poles and better lights,” Bush asked, pointing out that federal grants could cover the costs.

County Executive Mike Gannon said checking into the grants would needlessly postpone the project. He also expressed doubt that the energy efficiency grants could be applied to lighting issues at the park and ball fields.
“Even if the grant isn’t available for this, it would be worth checking it out,” Bush said.

Bush questioned the delay in making the repairs which was triggered by the falling of a light pole last Halloween night and repeated questions about the condition of the wiring and the existing lights.

“S&W (lighting contractors) told me the lights are fine. There’s nothing wrong with the lights,” Gannon said.
Moving back to the question of grants, Bush cited instances where the City of Knoxville, Hardin County, Oak Ridge and Cleveland, Tenn. Had obtained funding for lighting projects.

“This clean energy grant program takes in roofs, energy efficiency and lighting,” Bush said. “I don’t understand why these other counties had the option of getting these grants. They got the money.”

Commissioner George then moved to replace nine poles on county property, beginning at the baseball field.
“First things come first. We’ve got to get the poles up and then go after the wiring,” Commission Chairman Mark Barker said.

When these nine poles are done they will be done correctly, Gannon said. The bid is for poles, crossbars and wiring.
“If it’s not in the bid, its not going to happen,” Bush said.

However, the Commission did approve George’s motion unanimously with the funding to come from the county’s debt service account.

In other action, the Commission approved Edward Sissom to replace the late Jerry Pelham as Zone 1 Road Commissioner.

Registered Nurse Emily Elrod was nominated and approved to serve on the county’s Homeland Security Committee as recommended by Tim Bell, committee chairman.

The problem with that statement is that a member of the audience who volunteers for the Dixie Youth program stood up and explained that he was currently employed at an electrical company in Murfreesboro and he had actually worked on every single pole at the fields and stated they were in fact in very bad disrepair and he even expressed that it was a wonder a child had not been electrocuted. He stated (and gave the Commission a copy) that his company had agreed to sell the needed parts at cost and no response was given to him other than “thank you”.

Jim Bush presented County Executive Gannon with a grant in December and he chose to ignore it completely.
Even if it could not pay for the ball field lights then why not apply and use the money somewhere else?
It should really make people wonder why Mr. Gannon chose to not apply!

EllyMae
[Delete]
He didnt say he wouldnt apply.. He just stated it wouldnt get funded for this project. My thought process is it will be applied for to take care of the never ending courthouse renovation. Granted its needs some work but look at the money that was poured into the exterior already and it still leaks..
[Delete]
The time ran out for him to apply so it is impossible for him to apply for something that you can't apply for. He just flopped on helping the taxpayers just like he has for years.

And if the courthouse is leaking after again spending thousands of taxpayer dollars then HE should be contacting the contractor that did the work and demanding they come fix what they were paid to fix to start with.

Inept managment in every sense of the word!