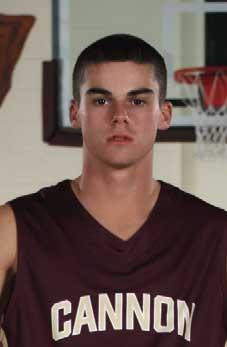 JUSTIN DAVENPORT
Justin Davenport poured in a game-high 25 points, including 11 in the game's final nine minutes, to lead Cannon County to a 75-57 win and the season sweep against Coffee County at Robert A. Harris Gymnasium Friday.

Davenport was dazzling from an offensive standpoint, knocking down 8-of-11 shots, including 4-of-5 3-pointers and he was 5-of-5 at the free-throw line. Throw in five assists, five rebounds and five assists and you have a pretty complete night.

Despite turning in a dynamic offensive effort, Davenport was talking about defense after the Lions (8-3) ended an abrupt two-game skid with a sound victory.

"We have lacked the defensive intensity that last couple of games and that has killed us," Davenport said. "Our intensity on defense was better and our communication was much better. It made a difference."

Leading by 10 entering the fourth quarter, Cannon County turned the defensive pressure up even higher and Coffee County wilted under the intense heat, connecting for just four field goals and just one in the first three-plus minutes of the fourth quarter.

"We challenge our guys every day in practice," Cannon County Head Coach Matt Rigsby said. "I'm very proud of our guys. You could just tell in how they played and their actions, the way they were taking pride in what they were supposed to be doing defensively. They really buckled down and played great team defense in that fourth quarter."

Even though sound defense and limiting second-chance opportunities was paramount, offensive superlatives were not lacking.

Senior Jared Nave turned in another stupendous performance. The strong-willed player was nearly perfect from the field, operating within the offense, and nailing 7-of-8 field goals for 19 points. He collected his fifth double double with 10 rebounds and also dished out three assists.

Cannon County shot 55 percent (24-of-44) and 39 percent (7-of-18) from beyond the 3-point line. The Lions enjoyed one of their better shooting games of late and used a barrage of 3-point bombs to distance themselves in the third quarter.

Coffee County had cut a 12-point deficit to 2, 46-44, on Lance Crismond's 3-pointer with 3:24 remaining in the third quarter. Just when Coffee County seemed to have momentum on its side, Jones yanked it away with back-to-back 3-pointers from the corner in a 60-second span to push the lead back to eight, 52-44, and Davenport stuck the dagger with a long 3-pointer with 1:27 remaining to extend the lead back to double figures.

"I feel real confident in my shot right now and hitting those 3s was good but it only happened because my teammates penetrated and got me open for the shot," Jones said.

The Lions maintained their advantage throughout the fourth quarter to remain undefeated in six home games this season. They look to keep the steak alive against La Vergne at Robert A. Harris Gymnasium tonight (Saturday, Dec. 18) at 7:15 p.m.