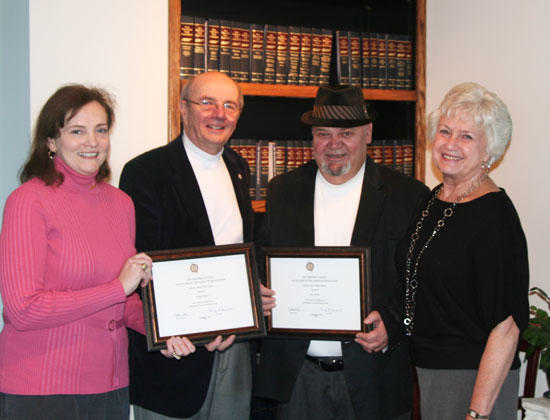 These gentlemen were honored for their continued support of the Tennessee Fisher House by writing numerous newspaper articles, speaking at various organizations, as well as public service announcements and interviews on numerous Middle Tennessee radio stations.

In addition to their media accomplishments, these gentlemen also combined their talents to produce a stage show in Crossville TN, “Country Salutes Veterans,” to benefit TN Fisher House, which brought Jeannie C. Riley from retirement to perform in support of today’s veterans and active duty military along with her uncle, Johnny Moore, and the Peter Miller and the Country Classics Band.

Mr. Whittle is a semi-retired newspaper columnist, with current columns in Murfreesboro Post, Cannon Courier in Woodbury TN, and the Dexter Statesman, in Missouri.  He is know in the LaVergne, Smyrna and Murfreesboro area in the 1990’s-early2000’s for “Whttlemainia” fundraiser which resulted in 17 Habitat homes being constructed in that area.  In addition to being a foreign war correspondent, he is the author of two books, and an amateur wildlife photographer, having received state, national and international writing awards in his 45-year journalism career.

During his 28-year military career, Penuel  also crafted his writing skills.  While in the National Guard, he worked as a journalist covering Rutherford County for the Nashville Banner, and several TV station affiliates around the state.  He was the principal spokesman for the Tennessee National Guard during “Operation Desert Shield and Desert Storm”.  He escorted Middle Tennessee media to war-torn Bosnia under combat conditions to cover the air and ground delivery of relief supplies to civilians in Sarajevo.

A poem Penuel wrote for presentation at the inaugural ceremonies of Gov. Ned Ray McWherter in 1987 was declared the official State Declamation.  The piece entitled “I Am Tennessee” is a published work and appeared for the first time in the 2006 edition of the Tennessee Blue Book.  After his retirement from the USAF, Penuel served as Administrator of Elections in Rutherford County from 2000 until his retirement in 2010.  He has served in many volunteer capacities in his retirement.

The support these gentlemen have given to the Tennessee Fisher House Foundation and it’s fundraising campaign using their journalistic talents is certainly worthy of award.  A long-term stay in a military hospital, sometimes hundreds of miles from home, can easily mean expensive lodging and food costs.  In recognition of the special sacrifices of our Nation’s wounded warriors, veterans and their families, Fisher House Foundation, through the kindness of donations received, provides ‘comfort homes’ on the grounds of major military and VA medical centers here and abroad.

Patients are referred to these two facilities from all over Tennessee and the surrounding states for the specialized care offered, especially by the Nashville VA Hospital.  Not all VA facilities are major surgical and trauma centers as is the Nashville VA Hospital which performs open heart surgery, organ transplants, brain surgery, limb replacements, chemo therapy, and many other serious treatments.

So many have forgotten that we are still at war, a war that has left thousands of our nation’s heroes with life-altering injuries that require lengthy hospital visits and continuing care for many years in the future.

Fisher House Foundation is a nationally recognized highly rated not-for-profit 501 © (3) organization.  They have held a four star Charity Navigator rating for the past seven years, and one of only four military charities receiving an A+ rating from the American Institute of Philanthropy.