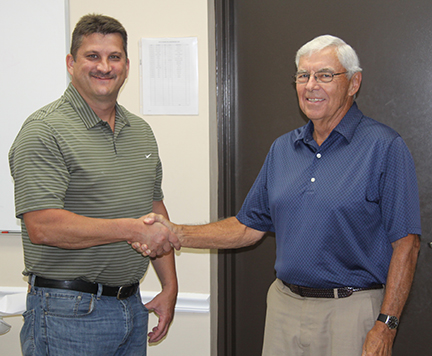 "We're glad to be still here in Cannon County," Anderson said. Plans are in the near future to expand the operation which makes boat interiors, if Crane can land sufficient employees that is. Currently, the plant has 180 wokers.

Crane Interiors came close to moving its entire operation to Warren County after negotiations stalled with the Cannon IDB.
"We were far, far away on reaching an agreement until (County Executive) Mike Gannon got involved," Anderson said.

In fact the IDB had listed the property for sale on LoopNet.com, a website that lists commercial property.

Concerned about losing Cannon County's second largest employer, Gannon got involved and began to help negotiations. "Commissioner Glenn Steakley, who had retired from Crane, got involved as well," Anderson said.

"If it wasn't for Mike Gannon, this would not have been done," the plant manager explained.

Crane had been leasing the structure at 200 Alexander Drive in Woodbury for 20 years.

The purchase by Crane will now put the factory on Woodbury and Cannon County's tax rolls.

It would have been tragic if the plant had to move. "We have a history of longevity in Woodbury," he said.

One Crane employee has worked with the company 44 years. "That's longer than I've been alive," Anderson laughed.

Still it is difficult to find good employees, he said. "We've upped our play rate to attract more people, but a lot of people drive out of the county to work."

Crane does have benefits comparable to those offered by larger manufacturers. "We offer 401K, medical insurance, short-term disability and dental," he said.