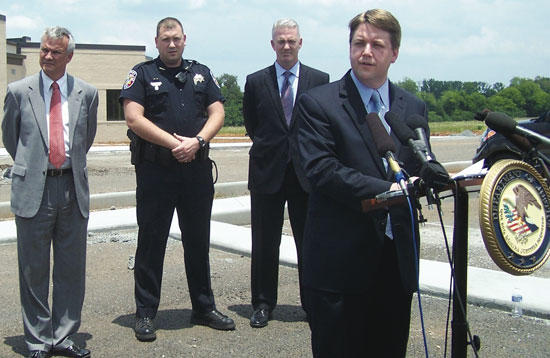 “The county has filed its notice of appeal and a motion for stay asking the court to maintain the status quo while the matter is reviewed by the Tennessee Court of Appeals,” County Attorney Josh McCreary said, adding a hearing before Chancellor Robert Corlew III on the latter filing is scheduled for 9 a.m. Monday, July 2  in the Rutherford County Judicial Building.

Only a few hours after county attorneys filed the appeal, U.S. Attorney Jerry E. Martin, who is with the Justice Department, confirmed federal officials are keeping a close eye on the civil lawsuit.

“We will continue to monitor the progress of construction and legal proceedings at the local level to insure these citizens are able to enjoy all basic liberties guaranteed by the U.S. Constitution,” Martin said, during a press conference on the indictment of a 24-year-old man accused of threatening to blow up the Islamic Center.

Javier Alan Correa of Corpus Christi, Texas, was indicted Thursday by a Nashville grand jury and is accused of violating the civil rights of members of the Islamic Center.

Correa has been charged in the Middle District of Tennessee with one count of intentionally obstructing by threat of force the free exercise of religious beliefs, as well as using an instrument of interstate commerce to communicate a threat to destroy a building by means of an explosive device.

“Today’s indictment should send a message loud and clear that the Justice Department will not tolerate violence or threat of any violence against the Muslim community in Murfreesboro,” Martin said.

In a somewhat stern manner, Martin said the controversy surrounding construction of the Islamic Center “has impeded the ability of people to exercise that most basic right.”

For more than two years, opponents of the Islamic Center have fought to stop construction of the new mosque, located on Veals Road off Bradyville Pike.

In May, Corlew ruled the Rutherford County Planning Commission failed to provide adequate public notice prior to approving a site plan proposal to build the Islamic Center, which subsequently led to opponents filing an injunction request to stop construction.

Although he stopped short of halting construction during a June 13 hearing, Corlew said an occupancy certificate could not be issued based on his previous decision regarding the issue of adequate public notice.

“Nothing in the previous ruling prevents the Planning Commission from properly giving notice and holding another meeting to reconsider the site plan approval – but that still has not occurred,” Corlew said. “There has to be an approved site plan before an occupancy certificate can be issued to the Islamic Center.”

A day later, the Rutherford County Commission voted to appeal the ruling, which Joe Brandon Jr., who represents opponents of the Islamic Center, has characterized as inconsiderate to taxpayers.

“The fact they are appealing and wasting more tax dollars is not a surprise,” Brandon said. “It would be too simple and make too much common sense for them to go through the proceedings in a correct manner.”

In the appeal, county attorneys questioned whether requiring the Planning Commission to treat the Islamic Center differently than other religious organizations violates the U.S. Constitution and Tennessee Constitution.

Rutherford County officials are also concerned about the possibility the Planning Commission could face further litigation under federal and state laws in the Religious Freedom Restoration Acts.

“A failure to grant a stay also risks actions being taken that are later deemed improper, depending on the Court of Appeals,” County Attorney Jim Cope said in the motion filed Thursday in Chancery Court.

Given the situation, Martin said the Civil Rights Division, an arm of the Justice Department, is now considering its options.

“We intend to protect the rights afforded under the Constitution to all individuals, including the most basic right to exercise freedom of religious beliefs,” he said.

Martin said the Justice Department would take “whatever steps are necessary” to protect the Muslim community.

“We will not sit idly by and allow the fundamental rights of these citizens to be violated,” he said, as Islamic Center opponents and members of the Muslim community stood next to the media throughout the press conference.

“What about our rights? Our rights are being violated because construction continues without a permit,” said Millie Evans, who was among the opponents in attendance.

Although she opposes the Islamic Center, Evans said she does not approve of any violence or threats against the Muslim community.

“This is not a community that is known for hate speech or violence,” Coker said. “The people who oppose the mosque have done so through a legal process, the courts, and that is what we will continue to do.”

Meanwhile, members of the Islamic Center said they were pleased to learn about the indictment, in addition to the fact that the Justice Department is monitoring the on-going legal battle.

“I am very proud to see Muslims’ civil rights are being defended,” said Drost Kokoye, a senior at Middle Tennessee State University, who is a community organizer with the Tennessee Immigrant and Refugee Rights Coalition.

“This indictment proves the Justice Department remains committed to standing up for what is right – our right to freedom of religion,” she said.

Even so, Kokoye said she still worries about the safety of the Muslim community because no one has been arrested or charged in connection with the August 2010 arson at the construction site.

“It is unfair that the Muslim community in Murfreesboro has faced so many problems,” Kokoye said, “especially given the fact that the Islamic Center has been here for decades without any opposition until recently.”

Martin said a $20,000 reward is still being offered for information leading to the arrest of those involved in the arson. He added the investigation into vandalisms at the construction site also remains unsolved.

Local law enforcement officials and federal authorities are committed to solving the cases, as well as protecting the Muslim community from further harm, he said.

Rutherford County Sheriff Robert Arnold said his department would continue to assist investigators with the Federal Bureau of Investigation and reiterated Martin’s comments.

“My job is to defend everyone’s rights,” Arnold said, “and that is what we are going to do.”