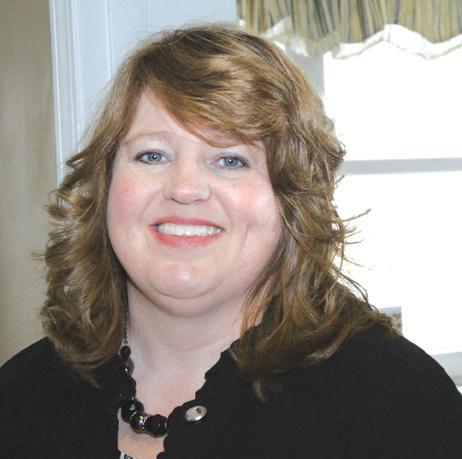 "It's a huge loss for us," said Juanita Farless, "but you have to go forward."

Farless, who mans the reception desk at Woodbury's center, said she was initially angry with Rigsby for taking the job in Murfreesboro, but can't blame her for "bettering herself."

March 14 is the last day for the personable Rigsby. Board member Ellen Eggleston will be handling administrative duties on a temporary basis. The Cannon Center's board hopes to have a new director in place by July 1.
"It will be hard leaving, I have lots of memories here," she said.

Rigsby's 12 years at the Cannon Center "have been like raising a child. Hopefully, it will thrive on its own.
"We have an excellent board and we've got a great staff that we are leaving behind," she smiled.

The Cannon Center has grown immensely during her tenure.

"We had only 50 members or so when I first came here. It was like a small social club," Rigsby said. Now, the center has 1,500 members with 800 of that number participating on a regular basis.

"We had to start from scratch. I have enjoyed it. It's really been a learning experience," she said.

News of Rigsby's new job brought a variety of responses from Cannon members.

"Most people say we're not happy for you, but we are proud," she laughed.

Rigsby hopes to bring new ideas to the Murfreesboro center. The St. Clair Center is one of the top four senior centers in the state, but it is in competition with a number of similar programs in Murfreesboro like the Patterson Park Community Center.

"My challenge will be making our program in Murfreesboro the focus of senior services," she explained.

Rigsby, a native of the Woodland community, is used to accepting challenges.

One of the most significant challenges of her life came some dozen years ago. She was working in Coffee County as a special education para-professional when couple of her students died unexpectedly.

"I was looking for a change and I happened to see in the Cannon Courier an ad looking for a director of the senior citizen program," she said. "It called to me."

"I put in for it and low and behold I got the job," Rigsby said. Her decision was complicated by the fact that school officials in Coffee County offered her a different position that same day.

"It was for the same pay and the same basic hours," she laughed.

"I weighed the two offers and took this one (in Woodbury) and it was one of the best decisions I ever made."

The secrets behind Rigsby's success are being outgoing and friendly and offering the best quality programs the center could afford.

"We worked hard on funding from multiple partners. That's a big part of my job," she said.

While the bulk of the center's funding comes from the United Way of Rutherford and Cannon Counties, other operating money comes from the Jim Cummings Fund, as well as various state and federal programs.

Another "secret" was selecting a diverse board of directors from all parts of Cannon County and not just from Woodbury.

"People would be surprised at all of the services that come out of this center," she said.

Hailing from Woodland, her husband, Greg Rigsby, is a native of East Side community. They have two children, Candice and Trevor. Candice is an advanced English teacher in Springfield, while Trevor managed to land his dream job. He's a technician at I-MAG Video, a worldwide industry leader in live video production and equipment rental to the music industry.

"He's worked with performers ranging from Charlie Daniels to Kanye West," she said.

As for her job in Woodbury … "It has been a pleasure. I love what I do," she smiled.