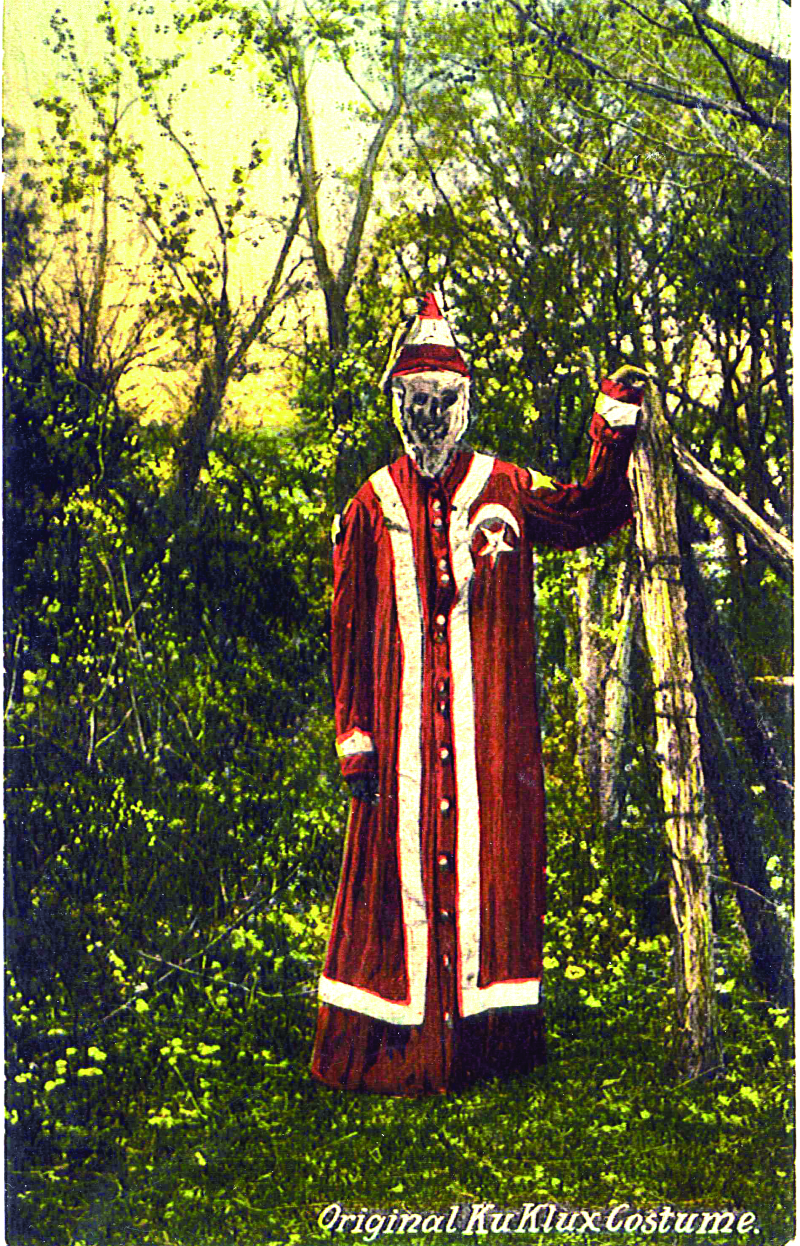 This is reported to be one of the original Ku Klux Klan costumes as designed by a Pulaski seamstress shortly after the conclusion of the War Between the States.

Fact: America's original Ku Klux Klan started in Pulaski, Tenn., shortly after the conclusion of the War Between the States.
Fact: Six Confederate Army veterans founded the KKK, but Forrest was not among them.
Fact: It is important that present-day researchers know Pulaski Citizen newspaper editor Frank O. McCord, brother to Citizen Publisher Luther W. McCord, was one of the founders.
Research indicates the McCord brothers evolved into publicists for the KKK, and helped spread the word, mainly in the South, while claiming publicly and privately to have no knowledge of the Klan's existence. Other founders were Pulaski citizens Richard R. Reed, John B. Kennedy, John C. Lester, Calvin Jones and James. R. Crowe.
Fact: In 1869, approximately two years after the KKK was started, Forrest ordered the group disbanded. This came after Forrest was installed, in absentia, as the KKK's Grand Dragon.
It has never been documented Forrest ever attended a raid, or wore regalia of the KKK.
Rutherford County Historian Gregory Tucker shared research about this: "There is no evidence that Forrest ever wore any Klan costume or ever 'rode' on any Klan activity. He did, however, on Oct. 20, 1869, order that all costumes and other regalia be destroyed and that Klan activity be ended.
"This was confirmed by the U.S. Congress in 1871. The natural tendency of all such organizations is to violence and crime, hence it was that General Forrest and other men of influence by the exercise of their moral power, induced them to disband." (See U.S. Congressional Committee Report of June 27, 1871).
Fact: As the KKK disbanded, President Grant ordered severe Republican "Reconstruction" of the South to end.
In a history booklet published in 1924 by the Pulaski Citizen, and later revised in 1934, there is a description what the six founding KKK members found on the home front: "Ex-Confederate soldiers returning to their homes, overpowered, disenfranchised and unrepresented, found on every side, wrecked homes, broken fortunes, desolate fields. Businesses, professions and money, all gone!
" ... but that was now a land which had known sorrows, a land which had broken the ashen crust and moistened it with their tears, a land scarred and riven by the plow-share of war, and billowed with the graves of her dead."
Historians Mr. and Mrs. W.B. Romine, who authored this version of history, attempted to describe the group's original intent: "The Ku Klux Klan which was organized following the War Between the States, was not organized for the purpose, as some have believed, of oppressing and punishing the negroes who had recently been freed, and were as yet unaccustomed to their new circumstances and conditions of life, and was 'children crying in the night, children crying for the light and with no language but to cry."
That historic booklet remains available today at the Pulaski Citizen newspaper.
The most publicized date for the KKK's founding, was Christmas Eve, 1865, which metered out to the present, would have made the original KKK 150 years old, this past Christmas Eve, 2015. However, that founding date has been questioned by more than one researcher.
A present-day historian noted by 1871, "thugs" from various Southern communities had started committing terrorist acts, primarily against newly-freed slaves and the appointed government regulators of Reconstruction.
How did the group spread, and did that trigger the change in course of the KKK into a brutal racist organization, partly justified because of the Republican Party's confirmed brutal Reconstruction tactics in the South?
Three years after being founded in Pulaski, why was controversial Forrest called in to ultimately disband the secret KKK?
"The thought was that since Forrest was a recognized military man in the South, he could bring military order back to the KKK," one historian notes back in time.
Disbanding the KKK was not the first time Forrest was in Pulaski.
In the waning battles of the War Between the States, Forrest was called upon to wrest control of the railroads in southern Middle Tennessee from the advancing Union Army.
He did that, causing confusion and dismay to his army's enemy, including the Southern Raid he staged on Union Forces at Tarpley Shop, a rural unincorporated community of Giles County.
By this time, there was no turning back of Union General Wm. T. Sherman's march to torch Atlanta and drive retreating Rebel forces into the sea.