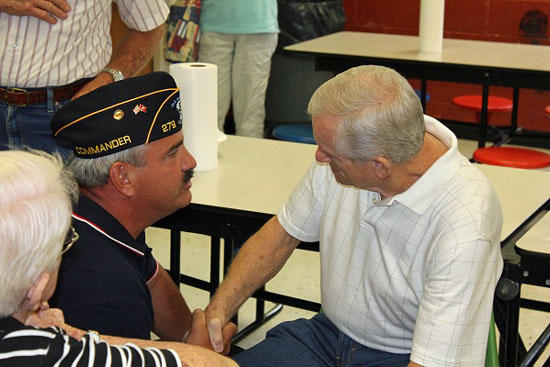 Commander of the Hilton Stone American Legion Post 279 Bobby E. Ferrell, left, chats with Milan Tucker during Saturday's benefit.
“When a man dies does he just fade away?” That is the first line to a gospel song written by Ray Beeler of Jacksboro, Campbell County, Tennessee. That is something I am sure has been on everyone’s mind at some time or another. What happens when we die? For those who practice a spiritual relationship with the Creator we know the answer, we will be with Him, God Almighty.

That is something to be happy about, but what about those left behind?  It is a time of sorrow and loneliness and hurt. But, if the person knows that someday they will be with their loved one who has passed it becomes a time that they can bare, with the help of God.

A man is a funny thing, he has been given a built in mechanism that makes him feel like he has to be the provider and protector to his loved ones. He has to be a hero to them and guide them in a world where there are so many dangers along the way and he is to be strong.

Unless you are born into money, the kind of money that sets you apart from most of the other people on this planet you will work from the day that you are big enough to carry something in your hands to the day that you die. This is the story of Milan Tucker of the Midway Community of Cannon County.

Milan is in his early 60’s and has been married to Darlene Jacobs Tucker since May 23rd 1969 and for the last couple of years has had more than his share of medical problems. These problems, along with medicines that were meant to treat these physical problems have beaten him down. But he continues day after day trying to be the provider for his partner of 43 years.

Now no one knows when they will cease to live among us, only God knows, but Milan and his doctors and Darlene knows he will pass soon. He has accepted that prognoses and he is prepared spiritually for that time. Milan is now worried, not about himself but for his best friend Darlene.

Milan has cancer and a tumor which is closing in around his blood supply to the other parts of his body. He is in pain, really bad pain, but he stays strong for Darlene and his family.  He is on heavy doses of morphine just to be able to get around daily and the morphine does not kill the pain but it does ease it enough to get him through the day. And it is a working day. Milan is a master woodworker making swings and other fine furniture. His work is beautiful. He has some swings that are not finished yet so he is trying to finish them for his customers before he will not be able to finish them at all.

Milan worries about Darlene and what life will have in store for her after he is gone on. Like any other loving husband he doesn’t worry about himself he worries about his wife. His friends and family are going to try and help him forget about worrying. He has a lot of friends, in fact almost everyone he meets finds him to be friendly and caring. He has a contagious laugh that all who hears him laughs with him. He has a bevy of friends that are bound and determine to help Milan succeed in accomplishing those things that need to be done.

At this time friends and family are finishing a modest little house on the backside of his property that he and Darlene have been working on for some time. That is a dream of his and we want to see it done.

Friends and family helped set up a benefit for last Saturday the 4th of August and from the looks of what transpired at the Woodland School it was a major success. One of the servers for the catfish dinner has said there were more than 600 diners and could possibly be more as the line was still serving at 7:30. An auction was being held at the same time with items donated by local stores as well as some businesses from Rutherford County and Cannon County. His family and neighbors donated items and time. Gary Nichols and his brother Mike and Dwight Vinson did a great job bidding those donated items off.

Milan was talking with people in the cafeteria and then came out to the gymnasium where the auction was going on. He looked tired but he did his best to talk with the people who wanted to see him. About 15 minutes before the auction was over he was just too drained to stay any longer and Darlene took him home.

Milan is staying strong, he told his supporters that he did not want an emotional tear filled event that night. He wanted everyone to have an enjoyable time. Milan is an inspiration to all of us.

Darlene and their children Marty and Mila were strong for him and the people gathered together at this event. The community will miss Milan after he is gone, but his character will still be here in the county. God has blessed Milan with a good family and friends and we will miss him. Please pray for his family.

Print
Members Opinions:
des
[Delete]
Great story Bob, this story brought tears to my eyes, it is good to see that our community can pull together and help each other when needed, my family has been lucky to be friends with all the Tucker boys cause my daddy ran with them in his younger days, may God continue to help Milan and see his dreams come true.
ewimbush
[Delete]
I was one of Milan's classmates and am sorry to hear about his health problems. He and Darlene I'm sure have plenty of good memories they have made thru the years. Live each day as happy as you can and hold on to your love for each other. Take it one day at a time and God will do the rest.Wonderful story by the Couier.