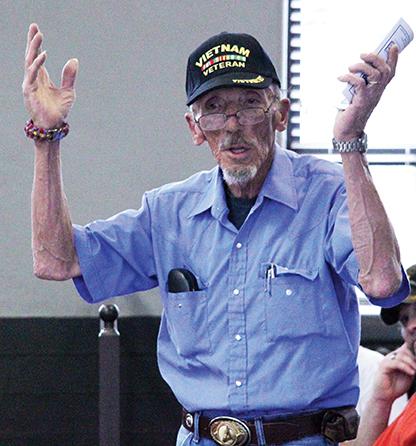 TONY STINNETT photo Mr. Milliken addresses the Cannon County Commission regarding Powell Road and Rambo Road. He says there are three Powell Roads in Cannon County and he is concerned it is an overlooked issue.

The meeting, which lasted more than two hours, featured a heated argument regarding the status of a Three-Star Community grant, the passing of numerous budget amendments, and citizen concerns ranging from mud bog traffic to the owner of the OK Shooting Corral “not being a good neighbor” to citizens in the Pleasant Ridge Community.
Item No. 19 on the agenda was “3-Star Confirmation Letter.” This was a letter to verify Cannon County confirmed Cannon County government had taken action on certain items. Before a vote was taken, Commissioner Jim Bush recognized Corey Davenport in the audience.

Davenport, chairman of the Republican Party in Cannon County and secretary of the Industrial Development Board (IDB), informed the Commissioners that Cannon County had lost a $10,000 grant through the Three-Star Community Program due to what he called lack of cooperation from the County Executive’s Office.

Davenport had told the Commissioners that he had been in contact with Amy New, Three Star Director, and she had informed him Cannon County had missed out on a $10,000 grant because of failure to meet an application deadline.
County Executive Mike Gannon had a completely different take on the issue. Before the dust had settled, Davenport entered into a heated exchange with Gannon that required Chairman Mark Barker restoring order at least three times as he attempted to silence Davenport.

Davenport told the Commissioners he had received a call from Rep. Mark Pody regarding the IDB missing out on a $10,000 grant. That information was inaccurate and it was actually a $10,000 grant for the Three-Star program.

“Amy New said she was trying to get the Three-Star Grant Program going in Cannon County,” Davenport told the Commissioners. “She said ‘I am getting no response from the County Executive’s Office and I can’t get anything done.’ She also said we were the only county in the UCD that did not apply for this grant and that we had lost it. She said (Cannon County) was the only county that lost its grant. We can’t get that back for any reason.”

Davenport also reported that Cannon County was Three-Star certified; however, he said that could also be in jeopardy, according to New.

Following Davenport’s report to the Commissioners, Gannon tried to explain that Cannon County did receive the grant.

“The reason we didn’t originally apply was because we still had $7,000 in hold on the previous grant,” Gannon said. “We can’t apply for more until that has been used.”

That’s when the fireworks started.

“That is not what (New) told me,” Davenport said.

“That is also not what she told me,” Davenport said.

“I don’t know who you are talking to,” Gannon said.

“I know what I am talking about and we are not de-certified,” Gannon said.

“That’s funny because I have e-mails (suggesting otherwise),” Davenport said.

“Would you let me talk?,” Gannon asked.

At that point, Chairman Barker told Davenport to allow Gannon to talk.

“We will have order,” Barker told Davenport. “We are not going to have this back and forth exchange.”

“We are not decertified,” Gannon said.

“I just told you the (grant) is for exercise equipment,” Gannon said.

“No, that was for last year,” Davenport said.

“I am not going to argue with you,” Gannon said.

“I know. You can’t because I am right,” Davenport said.

As it turns out, follow-up indicated Gannon was accurate.

The Cannon Courier contacted New’s office Wednesday to verify this information. Correspondence then began with Laura Elkins, who is communications director for the Tennessee Department of Economic and Community Development.

Davenport provided e-mails between he and New from previous months to support his claim. Those e-mails suggest Cannon County had originally missed a deadline to apply; however, Rep. Mark Pody was instrumental in getting an extension in April.

Gannon said a required reading was going to take place at the May County Commission meeting; however, only four commissioners were present and the meeting did not take place due to lack of a quorum.

“The majority of the credit belongs to Rep. Pody for making an extra effort on behalf of Cannon County and its citizens by reaching out to the Commissioner of the Three-Star Program and asking for an extension to re-apply for the $10,000 grant, even though the deadline had passed,” Davenport said. “With Rep. Pody’s involvement it is my understanding that Cannon County would have in fact lost the grant.”

Davenport did not tell the commissioners about an extension or Pody’s invovlement at the June meeting, only that Cannon County had lost the grant.

Earlier in the meeting Gannon had informed the Commissioners there was $7,000 remaining from the previous grant. He had originally wanted to approach the commissioners about using the grant money for exercise equipment for citizens of Cannon County. Instead, Gannon asked the commissioners to allow him to donate the $7,000 to “We Care Cannon.” The commission approved the request unanimously.

We Care Cannon is a non-profit organization that provides free backpacks, school supplies, haircuts, and other back-to-school necessities.

Davenport said the matter is over as far as he is concerned.

“The matter is finished and I hope that more diligence will be given by (the County Executive’s) office to any grants that are available for the citizens of Cannon County in the future.”

Gannon said the County Executive’s Office is always diligent in its pursuit of grant money for Cannon County. He pointed out Cannon County recently obtained a HOME grant of nearly $500,000 to assist low-income families with housing needs.

“Diane Hickman and our office do a tremendous job and we have been on top of this,” Gannon said. “We are always looking out for our citizens. Despite what was reported to the commissioners, we have not lost that grant. In fact, we are getting it.”
Gannon said he would like the County Commission to consider using the funds for exercise equipment that would be used by Cannon County citizens at a to-be-determined location.

There was also discussion regarding the OK Corral Shooting Range located in the Pleasant Ridge Community and owned by Grady Parker. Under new business, Commissioner Kevin George said he had been receiving complaints regarding shooting in the late evening.

Pleasant Ridge resident Gene Mason and his wife were in the meeting and George asked Mason if he would like to comment. Mason told the commissioners the noise was a problem and shooting takes place all hours of the day and into the evening.

Mason asked for compromise on behalf of neighbors in the community.

Commissioners discussed many options including allowing no shooting during specific hours in the evening and also to adjust range times seasonally. There was also discussion to draw up a nuisance law.

The final decision was to send to letter to Parker asking him to attend the July meeting of the County Commission in order to address the issue and work out a compromise.

Dalinda Parton addressed the commissioners regarding mud bog traffic on Pleasant View Road. She says it is a problem and something needs to be done about the trucks and equipment before someone is injured. Sheriff Darrell Young informed the commissioners there was no ordinances in place and no laws are being broken.

Bobby Mingle Jr. addressed the board concerning needing road work extended on Milligan Lane. He said the road is in “bad, bad shape.” He says he has done everything he was previously asked to do but can’t get assistance.

The commissioners also amended nine budgets as the end of the fiscal year approaches.