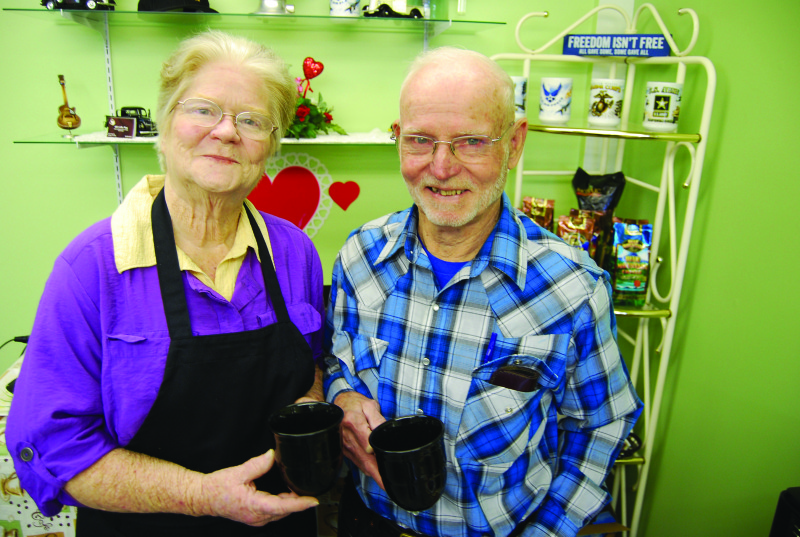 KEN BECK photo
Husband and wife for 56 years, Bill and Peg Rackley have seen their dream come true since they recently opened Bill's Coffee Shop on the Woodbury square. Serving breakfast Thursday through Saturday, the couple caters to all but have affection for veterans. They will offer a special Valentine's Day dinner from 5-7 p.m. Saturday (Feb. 13). Reservations are required.

Peg and Bill Rackley first got together more than 56 years ago when she served him a cup of coffee.

Today, he's the one who serves the coffee as they partner side by side in a cozy breakfast nook on the Woodbury square called Bill's Coffee Shop, a place that's a dream come true for Peg.

"I met him at Charleston Air Force Base," said Peg, 73, "I was working as a car hop at the Target Drive-in, and he came with a friend and ordered a cup of coffee. He wouldn't leave me alone. I was 16, and Daddy wouldn't let me date 'till I was 17.

"Daddy had all of us children read one verse from the Bible every night, and he prayed over his children. Bill came to the house and read the Bible with my Daddy and that put him over with my dad."

Peg, a native of Charleston, S.C., and Bill, who grew up in Goldsboro, N.C., have been married 56 years, and more than half of their marriage, from 1956 to 1985, he served as an aircraft maintenance superintendent in the U.S. Air Force.

That included a tour in Vietnam from 1963-64 and a tour of Thailand in 1972. The couple, who moved to Rutherford County in 2001, has four children, eight grandchildren and one great-grandchild.

Peg has been dreaming for years about opening a coffee shop in tribute to Bill as well as other military veterans. She shared those sentiments on Thursday morning with The Courier and several members of American Legion Post 279.

"It was in the year of the Gulf War, and I was thinking of all the military guys overseas and their families back home," she said. "I knew the concerns of wartime. The safety of a loved one, the holidays missed, the loneliness, the face and sound of a familiar voice no longer around. The children asking when was daddy coming home and myself wondering if he would be coming home alive.

"He spent two years in the Vietnam War. When he did return safe, I had a desire to someday honor him and others with a coffee shop named after my husband.

"Many years passed and places to rent were unaffordable. The time kept going by, and we became old but I still had the desire in my heart.

"In 2015 upon visiting Woodbury, I saw a building for rent, and yet I thought even if it was to work out financially, we're too old now, but I inquired about it, and the rent price was just right. Many said we were too old, but the desire drowned out negative voices.

"I wanted a place where my husband and other soldiers could gather for a cup of coffee and share in fellowship. It was not to be just for the military branches but for civilian soldiers. Soldiers of the cross of Jesus who could share their testimony of service to the great commander in chief.

"Now Bill's Coffee Shop has been birthed, a place of R&R to rest and recuperate in all areas of life through the encouragement of others," said Peg.

Bill, 79, said, "This is something she always wanted to do. It's a good challenge. I serve and mingle around and make coffee."

Peg and Bill live in Christiana, and rise at 5 a.m. on Thursdays, Fridays and Saturdays to make the 24-mile drive to Woodbury where they serve breakfast from 7:30-10:30 a.m.

Peg keeps a New Testament on top of a table in the shop.

"I read it when I come in and pray for the people that we can bless in a coffee shop with a different atmosphere. It's a God thing," she shares.

As for how they found Woodbury, she recalled, "I come up here to go to the antique shops, and I came to the antique store on the corner. When I drove up [North Cannon Street], my eye caught the sign on front of this building. It said 'for rent.' I checked into it."

After doing some painting, repair and decorating, the couple opened for business in October.

"I love it. I love my husband. I wanted to honor soldiers. I love fixing food, meeting people and hearing the stories. I love the community. That's the reason I came to the antique stores. The people are so friendly," she said.

"Eventually, I do believe the Lord is going move us to a bigger place for the benefit of Woodbury community. It is about giving more than taking. We don't make no money here."

From 5-7 p.m. Saturday, Peg and Bill will serve a Valentine's Day banquet. It begins at 5 with appetizers and punch. At 6 p.m. guests will enjoy a T-bone steak, baked potato, salad, Texas toast, beverage and dessert (Ovie Hollis's famous red velvet cake). There will also be live music, furnished by the Rackley's daughter Pamela, who plays the keyboards and sings easy-listening and gospel songs. Cost for the meal is $12. Reservations are necessary.

"This is mostly social. Occasionally we talk about the Legion," said Harrell. "This keeps us together and on track. Other people join us here who are not members."

"I had the buffet line, and it's crackerjack, especially the omelet and biscuits," Stone noted.

On a shelf in one corner of the café, four mugs bear emblems representing the Navy, Air Force, Marines and Army. A small banner reads: Freedom isn't free. All gave some. Some gave all.

There are a couple of photos on the wall that show Bill back in the day when he kept planes in shape for Uncle Sam's pilots. One picture catches a moment when Bill, a guitar player, met his guitar hero, the late, great Chet Atkins.

As for the vittles, Peg describes them as being "food like Mama's favorites." She learned to cook from her mom, and her hot biscuits are amazing, having the appearance of cornbread muffins.

With butter and your choice of pineapple, boysenberry or peach jelly, the biscuits are big winners.

Faith Cooke of Woodbury had the homemade sausage on her plate and declared, "This so good and thick. It'll make you slap your granny, it's that good."

Her friend Carolyn Demonbreum of Lascassas, added, "Their omelet, it's to die for."

The kind words and smiles on the faces of her customers give Peg contentment. Opening a small café is a big challenge, but she is glad she persevered and made Bill's Coffee Shop go from a desire into reality.

"Never give up on a dream, a desire, even though years have passed," she said. "For when you least expect it, God will show up strong in bringing about a good work for his glory."